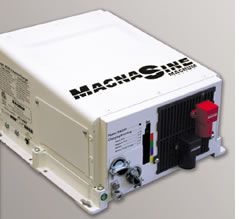 Sixteen years ago, contributing writers Joe and Lee Minick equipped their Mason 43, Southern Cross, with a Heart Interface Freedom 20 charger/inverter and a Link 2000R from Cruising Equipment, both made by companies based in Valley Forge, Penn. When both of these units were ruined during a knockdown (see PS, April 2013 online), they were forced to look for a replacement.

The Link 2000R monitored and controlled both the Freedom 20 and the Ideal Regulator Module that managed the engine-driven alternator. It was also a full-fledged, two-bank battery monitor and was one of the first systems to report the battery state of charge with reasonable accuracy. Equally important, the Freedom 20 was rated for use with 50-Hz power, essential for anyone sailing in Europe, as the Minicks were, where European shorepower must be converted to 115-volt AC with a transformer.

The Freedom 20/Link 2000R combination never missed a beat in all its years of use on the Minicks boat, and many of these units are still in service today. Unfortunately, Heart Interface and Cruising Equipment closed their doors several years ago when the brand was purchased by another company. Today, virtually no support is available for these venerable designs, although some repairs are still possible using off-the-shelf parts.

The Minicks system was damaged beyond repair, and the couple was faced with finding a replacement that could functionally duplicate it. The sticking point was the need to operate on 50-Hz power.

Joe Minick contacted several manufacturers of inverter/chargers looking for one that was rated for use at 50 Hz and also functioned as a battery monitor. At that time (2012), there were only two units that met this requirement. One was the Mastervolt Combi 12/2000 that PS tested in 2010 (see PS, February 2010 online). It operated on 50 Hz, but installation was going to be a challenge. The inverter/charger control and battery monitor display were separate panels that needed more space than the Minicks already-crowded chart table panel could provide. In addition, the profile of the inverter/charger was somewhat different and wouldnt fit in the space vacated by the Freedom 20. The thought of finding a new home for the panel and relocating the inverter/charger control somewhere outside of the chart table area was daunting.

The second system that met the 50-Hz challenge came from Magnum Energy (also tested in 2010). While slightly larger, the Magnum Energy MS2012 inverter/charger would just fit where the Freedom 20 lived, had the same inverter and charger ratings, and would require virtually no rewiring. It mated with the optional ARC-50 controller using a single telephone cable just as the Link 2000R had.

Because the location was the same, the heavy DC battery cables and the large wires carrying the AC output would connect as before, and the Minicks were pleased to find that the ARC-50 control fit perfectly in the hole left in the chart table by the Link 2000R.

Several other pluses made the Magnum Energy system a near drop-in replacement. The ARC-50 inverter/charger controller became a battery monitor with the addition of a small ME-BMK module mounted near the inverter/charger and connected to it with another phone cable. The battery monitor could use the existing Heart system shunt, and the original shunt wiring could be connected directly to the module.

When the ARC-50 control, which provides control and monitoring of both the charger and inverter modes, is mated with the ME-BMK module, virtually every AC and DC statistic can be read on the controls display. It almost looks as if the Magnum Energy system was designed as a drop-in replacement for the older Heart Interface installation, and some say it was.

The Magnum MS2012 doesn’t come with a regulator for the alternator, but neither did the standard Cruising Equipment Link 2000. Only the Link 2000R offered this capability, and apparently, no other system currently duplicates this feature. Now, three years down the road, the Minicks are still impressed with the Magnum Energy systems performance and reliability. If you are considering replacing an older Heart Interface system, start with a look at the Magnum Energy products.