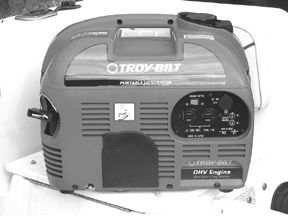 It’s been a few years since we last wrote about ultra-portable generators, but that doesn’t mean we haven’t been looking at them covetously all the while.

They’re more interesting, and more mainstream, it seems to us, than the big, high-capacity, permanently mounted gensets (usually diesel fueled) with dedicated wiring and through-hull exhausts, used to make electricity when the main engines are idle in the yachts of the idle rich. (Resentful? Us?) Mid-sized and even small rack-carried generators just don’t seem to have a place–they’re too heavy to lug around, too big to stow, too noisy, and too noxious.

These little babies, though—the plastic-cased ones that can be carried (or at least lugged) in one hand—are a different story. This is a piece of equipment that all red-blooded boaters covet—it’s just that we don’t always know why. These portables, which produce up to, say, 2,000 continuous watts, aren’t big enough to do a huge amount of work, but they’re so light, clever, and compact that they just seem like something we ought to have. Even the idle rich pause when they see these things in a catalog or hardware store.

How They Work
A standard portable generator produces AC power directly. It contains a small engine (gasoline-powered, four-stroke in the case of this evaluation), which turns at 3,600 rpm to produce, via an alternator, 120 volts of AC power at 60 hertz, thus mimicking a household current—although voltage and hertz frequency do vary somewhat with load. The engine rpm is kept steady by a governor, which feeds the carburetor more fuel as the electrical load comes on (as when you switch on a sander), and decreases fuel when the load decreases. A voltage regulator helps smooth the output and prevents wild spikes. You simply plug your appliance into the socket on the generator, and away you go. There are plenty of other details, of course, but those are the basics.

So much for the standard portable generator. In recent years, some companies have been trickling down engineering from their bigger gensets to their smaller models, in the form of variable speed technology, or VST. With VST, a generator rectifies the AC output from its alternator into a powerful DC current, then feeds that DC current into a sophisticated inverter, which changes it back to AC, and you plug your appliance into the inverter. It sounds like an bass-ackwards way of doing things, but there are two advantages to the technology: It allows engine speed to vary, so that it can run at optimum revs to answer the load. This makes the engine more efficient at producing power, which means that a smaller, lighter engine can do the job. Thus, the second advantage.

A third potential advantage is that the strong DC current can be used to boost starting and house batteries very quickly. The downside is that with all those amps flowing, if you don’t monitor things carefully, you’ll fry your battery in short order—maybe in a matter of minutes. The safer way is simply to plug a dedicated battery charger into the AC socket, then hook it to the dead 12-volt battery. It’s slower, but the charger’s regulator will save you an expensive mishap.

In our last review of portables, Coleman was a pioneer in its use of VST. The Coleman Powermate 1000, with VST and a light two-stroke engine, was a favorite. Today, Coleman makes no generator smaller than an 1850-watt model (which is included here), and it’s a standard generator (non-VST) to boot. Meanwhile Yamaha, Honda, and others have adopted VST.

Portables, in our view, are worthlooking at if you can justify them for both surf and turf—meaning, to a lesser extent, the coastal cruising boat, and to a greater extent, the boatyard and the distance-cruising boat liable to visit remote locales where AC power is hard to come by. They’re useful for charging batteries—not only the boat’s 12-volt batteries but, rechargeables used for tools, flashlights, and so on, because you can plug AC chargers into them. They’re useful for powering tools directly via AC power, generally one at a time— a drill, a grinder, a sander, etc. They can also be useful for lighting, pumping, and other spot projects as they occur. Their portability means they can be slung into a dinghy and carried ashore, or to a friend’s boat.

These generators are not always well-suited for directly powering sensitive electronic equipment like computers or TVs, because their AC output waveform tends to be quite rough. Household AC appliances are designed to run best on a normal, powergrid-supplied AC current, which is expressed on a graphing meter in the form of a smooth sine wave. Small generators historically have been crude in supplying power, and their output waveforms can look quite boxy on the graphic display. This translates into electrical noise like hum in audio equipment and fuzz on screens. Today, the more advanced VST generators are engineered at least to approximate a perfect sine wave in forms that are sometimes called “modified” sine waves.

User Beware—Seriously
If you operate one of these things in an enclosed space, or even a space with poor ventilation, you’re liable to kill yourself. We know our readers don’t need to be told this, but we say it in case a copy of this publication slips into the hands of people unwise enough, say, to allow their kids to “teak surf,” holding on to the edge of the swim platform while the boat is under power, breathing in a heavy dose of carbon monoxide. People have died doing that, and the same level of common sense would suggest that taking a generator down into the cabin to work on something would be no problem. Don’t do it. Carbon monoxide is a killer with a long, proven track record on boats.

What We Tested
Practical Sailor assembled a small selection of portable generators from well-known makers.

The heaviest was the 3.5-hp Coleman Powermate New Pulse 1850, which puts out 1850 watts at peak, 1500 continuously. It weighs about 73 pounds—a heavy lift, but not out of the question. Fifteen-hundred watts can get some serious work done. As said earlier, this is a non-VST, standard generator.

The other standard generator was from Briggs & Stratton—its 900-watt model #1923, with a 2.4-hp overhead valve Briggs & Stratton engine. The 900-watt rating is for continuous running. The weight is moderate and the price is good—under $500.

We tested three VST types. All can power more sensitive equipment, like laptops or televisions.

The second lightest, the 29-pound Yamaha EF1000iS 1000-watt generator rounded out the field. The Yamaha is an updated (VST) model of the EF1000 series that has been around a long time.

How We Tested
We spent a couple of days with these machines, lifting them, starting them, measuring their noise levels (both audio noise levels and electrical noise via sine waves), and recording voltages with various loads.

Weight, of course, is critical. A true portable must be light enough to carry with one hand, but also not so heavy or bulky that you break your back while transferring it from dock or dinghy to the boat or vice versa.

None of the instructions for these units stated that a break-in period was required, but we broke them in anyway. We ran each generator for one hour with various loads. Then the two testers recorded voltage with no load. Then we plugged in tools and devices that a boat owner might typically use—a 500-watt light, a 70-watt squirrel-cage fan, a 5-amp drill, and a 9-amp belt sander—and recorded with a Fluke multimeter the drop in voltages and the voltage at which the voltage stabilized. All this is listed in the chart above. With an oscilloscope, testers also examined the sine wave each unit generated.

Noise levels were recorded from 10 feet; we figured that was a reasonable distance from which a boat owner might be working with the generator running.

Finally, testers timed how long it took each generator to run out of gas (see Tested Run Time in chart) with a dual load, the light and the fan. During all this, the testers noted the ease of starting for each generator.

What We Found
The Yamaha had the cleanest sine wave, followed by the two Hondas. The Coleman showed the roughest sine wave, as was expected.

The Yamaha also had the best voltage stability, meaning its voltage level with loads remained at its normal operating voltage level of 122.6 volts. The runnerup was the Honda Super Quiet EU2000i, which produced out 1 to 2 fewer volts with various loads.

Even though voltage varied for the two non-VST types, they were still generating plenty of voltage.

All of the generators ran our light, drill, and fan simultaneously with no problems. The Honda EU2000i was the only generator capable of powering all four devices while maintaining a respectable voltage (124 volts).

All generators—except for the Yamaha—started with one pull of the cord. The Yamaha required two or three pulls about 50% of the time. Which ran the longest? The Briggs & Stratton, but it also has the largest fuel tank—1.2 gallons. The most economical was the small Honda, followed by the Yamaha. The least economical was the Coleman Powermate (See the chart for Minutes Per Gallon.)

Conclusions
All of these generators get the job done. The VST types do it differently—and each type has its pluses and minuses. The VSTs are quieter and lighter, but much more expensive. The non-VST are cheaper but loud, bulky, and heavier.

The two types are truly different animals. Therefore, we will pick a winner from each category.

Despite its slightly noisier operation, we like the Yamaha EF1000iS best among the VST models because of its spotless sine wave, excellent voltage stability, low weight, and economical operation.

The Hondas are excellent generators. If you want a lot of power—quiet power—and are willing to cough up $1,080, the bigger Honda is a good option.

Also With This Article
“How We Tested”
“Value Guide: Portable Gas Generators”