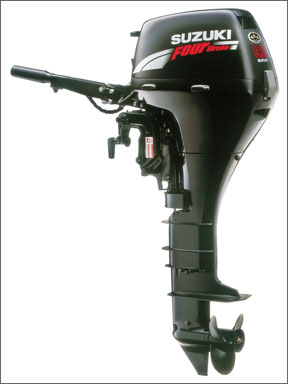 Practical Sailor last tested four-stroke, 9.9-horsepower outboards in the June 2007 issue, with the Mercury 9.9 coming out the clear winner. These engines are well-sized for large, rigid dinghies or as auxiliary power for smaller keelboats, but their weight can be an issue. This report compares the Suzuki 9.9-outboard and the Yamaha 9.9 to the Mercury. Both the Suzuki and the Yamaha are carbureted, water-cooled engines. On-the-water engine performance tests found the Suzuki to be the loudest and the heaviest 9.9 we tested. The Yamaha is more compact, but at 91 pounds, it is no lightweight.

Were all glad the old, carbureted two-stroke outboard is fading into history. Four-strokes run quieter, burn less fuel, and produce less smoke. But four-stroke manufacturers still haven't figured out that weight thing, no matter what size were talking about.

The four-strokes undeniable qualities carry with them a considerable weight penalty. For instance, the two 9.9-horsepower outboards we evaluated in this test exceed 90 pounds. One is just shy of 100 pounds. (Engine manufacturers actually label the 9.9 models as “portable.”)

Remember the 75-pound two-stroke? Or Practical Sailors 59.4-pound favorite-the Nissan/Tohatsu 9.8-horsepower two-stroke (Practical Sailor, Nov. 15, 2000)? Thats no typo. It was really 59.4 pounds. Unfortunately, that engine is no longer available. The Tohatsu MFS9.8A, an 81.5-pound, four-stroke, which we evaluated in June 2007, replaced that model. The 07 article also reported on 9.9s from Mercury and Honda. More than a year later, Practical Sailor finally has been able to test the remainder of the field-Suzuki and Yamaha 9.9s-for this report.

The 9.9-horsepower engine makes a good fit for larger rigid inflatable dinghies like those featured in the July and October 2008 issues. Some sailors don’t mind rowing or will put up with the putt-putt of a smaller outboard. (Practical Sailor reported on 2.5-horsepower engines in December 2006.) But for far-ranging exploration or quick provisioning runs ashore, an 11-foot RIB with a 9.9-horsepower outboard makes an attractive alternative.

An 8-horsepower four-stroke (Practical Sailor, Jan. 15, 2004) may still struggle with a fully loaded RIB, while other RIBs are too light to rate a 15-horsepower engine. Even a 9.9 can push a RIB at close to 20 knots, so caution is required.

The major downside, as we mentioned, is the weight, which all 9.9s have going against them. So, other factors-ease of starting, ease of maintenance, throttle and shifter position, position and comfort of the carrying handles, and noise levels-become all the more important when trying to decide on an engine.

Both the Yamaha 9.9 FMSH and the Suzuki DF15 are offered with 20- or 15-inch shafts. They can also be found with electric starters and power trim and tilt. We tested the basic models-pull start and manual tilt and trim.

Engines are often identical in dimensions to others in a manufacturers lineup. The Suzuki 9.9, for example, is a detuned version of the companys 15-horsepower motor. The Yamaha 9.9, however, utilizes its own engine block. The engines that sandwich the 9.9 in Yamahas fleet-the 8- and 15-horsepower motors-are manufactured with different powerheads.

Many of our conclusions about these short-shaft models should be useful for sailors considering the long-shaft models.

Both the Suzuki and Yamaha are carbureted two-cylinder, water-cooled engines that take about a quart of oil. The Suzuki is a significantly larger engine, with a displacement of 18.2 cubic inches, compared to 12.9 for the Yamaha and 12.8 for the Mercury.

Our pull-start models have chokes that need to be used when the engine is cold. Standard equipment includes a 3.1-gallon plastic fuel tank, a fuel hose, a mini tool kit with extra spark plug, and an aluminum propeller. Both manufacturers back their engines with three-year warranties, and both carry the highest emissions rating: three stars.

The Suzuki, at 97 pounds, is the heavier outboard compared to the Yamaha at 91 pounds. The Suzuki, in fact, weighs more than any of the 9.9-horsepower four-strokes weve tested.

The Suzukis gear shift is on the forward section of the engine, on the starboard side. A metal rod links the shifter, which is made of plastic, to the components inside the engine.

The Yamaha shifter is mounted on its tiller, aft of the throttle. We prefer this setup as its easier to reach. Also, Practical Sailor testers found the Yamaha easier to shift than the Suzuki.

On the downside for the Yamaha, its shifter and longer tiller require more stowage room. The Yamaha tiller is 4 inches longer than the Suzukis (23 inches vs. 19 inches). This allows the driver to sit farther forward in the boat, which is important given the weight-sensitive nature of dinghies.

Practical Sailor testers liked the longer tiller while driving but not while wrestling it from the truck to the dinghy and back. It seemed to always get hung up on something, particularly the carriers clothing.

Both manufacturers placed the engines kill switches on the inboard side of the tiller, just forward of the elbow. We still prefer the Mercurys tiller/shifter/kill switch setup, which integrates the shifter into the tiller handle and has the stop button on the throttle face.

Tilting and trimming both the Suzuki and Yamaha can be done with little fuss. A lever at the front of the mounting bracket on the tilt tube locks and releases the engine. The Suzuki has five trim positions for shallow-water operation, while the Yamaha has four.

The throttle-tensioning knob on the Suzuki we tested failed to increase tension, our testers noted. The Yamahas tension adjuster worked just fine. Yamaha has placed its knob in a convenient location-just aft of the throttle on the tillers inboard side. The Suzukis is under the tiller forward of the elbow.

Both engines come with nearly identical levers for adjusting steering tension. These are above the trim tubes, and both are covered with rubber for grip and comfort.

The engine oil for these outboards must be changed after the first 20 hours of operation and then after every 100 hours of use. Neither has an oil filter.

Both must be stored on the tiller (port) side, making them less stable than other engines-like the Honda 9.9-that rest on their non-tiller (starboard) sides.

The Suzuki rests on two shims on the lower portion of the cowling. These “feet” are covered with rubber to help prevent movement during storage. The Yamaha test engine, which rests its full weight on the elbow of the tiller, sustained some scratches during transportation and storage. Wed like to see the elbows of the tillers covered with rubber since the engines also rest on them.

One bonus noted on the Yamaha was its flush port with a garden hose connection on the starboard side of the engine. Its perfect for quick, easy flushing. Flushing the Suzuki, however, is a complicated affair, in our opinion. First, users must buy an adapter, which does not come standard with the engine. A garden hose connects to the adapter, which is located just above the lower unit. Before turning on the water, the water intake hole on the underside of the ventilation plate must be plugged. The engines owners manual recommends using a piece of duct tape. Blocking the intake prevents air from getting sucked into the water pump and damaging it.

Its easier to check the engine oil level on the Suzuki. Its dip stick is in plain view on the port side, about halfway aft. The Yamahas dipstick is near the base of the engine, behind the lower cowling. Spark plugs are easier to get to on the Yamaha, however.

Testers found changing the oil in both engines to be easy. Each has a drain plug.

The Suzukis heavier weight made it more difficult to carry and to trim or tilt when it was mounted.

Removing the cowling on the Suzuki was no problem-just flip the latch on the back of the engine and slip off the hood. There is no latch on the forward end. Getting the cowling back on was only slightly challenging. You have to get the hood down all the way over the lower cowlings gasketing to ensure a correct install.

Practical Sailors male testers had no problem starting the Suzuki, but only one female tester was able to cold start the engine. The shifter on the Suzuki also was slightly stiff.

One thoughtful edition on this Suzuki was its coiled wire guide on the engine face that prevents the fuel hose from getting tangled with the tiller.

On the water, the Suzuki pushed our dinghy to a top speed of 13.4 knots-2 knots slower than the Yamaha. The Suzuki was also louder than its competitor. Testers recorded 90 decibels at 10 knots and 93 decibels at full throttle. On the plus side, the Suzuki burned less fuel: 0.5 gallons per hour (gph) at 10 knots and 1.3 gph at full blast.

Bottom line: The Suzuki DF9.9 is the heaviest and loudest-running 9.9 outboard weve tested, and its duct-taped freshwater flushing setup leaves a lot to be desired, in our opinion.

The Yamaha is more compact than the Suzuki. Its circumference-where the top and bottom cowlings meet-measures 50 inches, compared to the Suzukis 54 inches.

But at 91 pounds, the Yamaha is no lightweight, and the large tiller presents a challenge when carrying the engine. Storing the Yamaha requires that it rest on its tiller. Wed prefer it be better protected, but the cowling is easier to put on and take off than the Suzukis.

The Yamaha shifter worked smoothly, as did all of the other operational components. The engine burned more fuel than the Suzuki at cruising speed (0.75 gph) and top speed (1.8 gph), but it pushed the dinghy noticeably faster: 15.5 knots. (Thats slower than the Tohatsu and Mercury, which propelled the boat to 17 knots.) The Yamaha also ran smoother and quieter, registering 88 decibels at cruise and 90 at WOT.

Bottom line: The Yamahas strengths include its long tiller and smooth shifter. We also like its easy freshwater flushing attachment.

The engines Practical Sailor tested for the June 2007 article impressed us more than these two. In that report, we recommended buyers beware the heavy Honda if they anticipated having to mount and unmount the engine frequently. The same goes for the Yamaha, which is a pound lighter than the Honda, and the Suzuki, the heaviest motor tested. All three weigh too much to be called “portable.”

In this test, the Yamaha gets the nod over the Suzuki. Of the three heavier engines, we prefer the Honda despite its higher price tag. The Honda has a five-year warranty (versus the others three-year warranties) and runs quieter than the others. The Yamaha ranks second. Its flushing setup stands out as one of its best features, in our book. We wish all of the engines had this kind of arrangement.

Practical Sailor still ranks the Mercury as Best Choice and the Tohatsu MFS 9.8A ($1,752, www.defender.com) as Budget Buy in this outboard category.