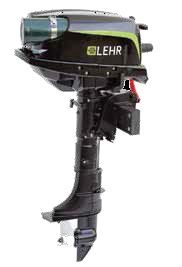 Capt. Bernardo J. Herzer has been converting small engines from conventional fuels to propane since he was a teenager. In 2003, his passion for eco-friendly engine tinkering was renewed during a North Sea surveying project aboard his 180-foot oceanographic research vessel.

There was a considerable amount of damage done to the North Sea-a lot of it due to overfishing and some of the problems with gasoline and oil spills, Herzer explained. Our technologies are vastly more powerful than our environment. Running commercial research vessels, you learn about innovation and technology, and how to use that technology very responsibly.

He returned to his California home with a new determination. I wanted to make a difference, and I think we are doing that, said Herzer, the founder and CEO of Lehr Inc., a manufacturer of zero-emissions, propane-powered lawn tools and marine outboards.

In 2008, Herzer patented his propane-powered small-engine technology and developed a line trimmer, leaf blower, and lawn mower. In early 2012, he introduced his first propane outboards-2.5- and 5-horsepower models-and later launched the 9.9-horsepower model.

Practical Sailor recently tested the 5-horsepower Lehr LP5.0, and we plan to test the newer 9.9 soon.

The Lehr propane outboards have earned several environmental and technical awards, including the 2012 National Marine Manufacturers Associations Innovation Award and Intels 2012 Environmental Award. They also were among the winners of West Marines 2012 Green Product of the Year award.

These next-generation products are easier to use, maintain, cheaper to operate, and better for the environment, Herzer said. He added that propane outboards are more efficient than gas engines because their higher compression allows them to burn the fuel more completely, resulting in zero emissions.

The water-cooled, four-stroke LP5.0 operates at 4,000 to 4,500 rpm at wide-open throttle. It has an electronic ignition-no priming or choke required-and its crankcase holds about a half-quart of 10W30 oil. We tested the 49.6-pound, short-shaft (15 inches) model; the long-shaft (20 inches) version weighs in at 52.8 pounds.

The engine can be fueled using a 16.4-ounce propane twist-on bottle like those used with camping stoves and portable grills. The small bottle-which retails for about $4 to $5-fits in the back of the engine. Cruisers and others whod rather not store multiple small propane canisters for extended trips can instead buy a 20-pound, 5-gallon remote propane tank that is made of composite and housed in a hard-plastic carrying case ($150); a 4-foot connecting hose ($30) is required for the setup. The cost of getting the 20-pound tank filled will vary, but $3 to $5 per gallon is a typical price in the U.S.

According to Lehr, the LP5.0 on an 8- to 10-foot RIB with two people aboard will run wide open for about 30 minutes on one 16.4-ounce canister of fuel. During typical use (with varying speeds), the canister will last about 90 minutes. Practical Sailors sea trials confirmed these claims: Testers ran the engine for 45 minutes and used half of the small canister.

For sea trials, PS mounted the LP5.0 on a 10-foot-2-inch Mercury Dynamic 310 RIB (PS, July 2008). The inflatable dinghy, which can carry up to four people or 1,089 pounds, was inflated to its recommended air pressure for the test. The test site was Sarasota Bay, Fla., in light winds and calm water.

The engine we tested was already broken in, so once it was mounted, we put it through its paces to gauge performance. Testers measured its speed and noise levels at idle and full-throttle in two directions and averaged the readings to account for wind and current. We started the engine both warm and cold several times, and noted how easy it was to mount, tilt, and remove from the RIB. Testers also noted how easy it was to gas up the outboard using the 16.4-ounce canister and the larger remote tank.

For comparison, weve included the specs and ratings of a gas and an electric engine in the accompanying Value Guide. Both the 4-horsepower Yamaha F4 (PS, August 2010) and the electric, 3-horsepower Torqeedo T-1003 (PS, January 2011) performed well in past tests. If youre considering the LP5.0 for dinghy duty, be sure to check out our past test of dinghy engines (PS, December 2006) and small four-stroke outboards (PS, March 2003). If gas alternatives float your boat, check out our electric outboards reports in the January 2011 and January 2010 issues.

The LP5.0 has two handholds for carrying it-one on the engine front and another on the back, just below the cowling. Testers found the engine to be relatively easy to move and mount.

For storage, Lehr advises users to lay the engine on its tiller side or store it in the upright position to prevent engine oil from leaking into the cylinder. We prefer storing engines on their non-tiller side so that they rest more securely.

Testers noted that the oil fill, located just above the tiller elbow on the port side, is easily accessible for regular maintenance. They also reported that the aluminum clips for attaching the cowling cover-one on the front and one on the back-were tough to work with and somewhat flimsy. Herzer said that future engines will have improved clamps.

On the aft starboard side of the engine is a cradle that houses the small propane canister. A cutaway in the cowling accommodates the stored canister, which sticks out behind the cowling. The receptacle for the remote tanks hose is on the front of the engine between the cowling and the carrying handle, as is the kill switch. Both can be accessed without a fuss.

Testers noted that the gear shifter, mounted on the starboard side, would be easier to locate by feel if it were larger; as it is, the driver needs to visually locate it. The friction-controlled tiller and throttle proved to be ergonomic and functional.

The engine-tilting procedure was a bit more troublesome than some outboards weve tested, but the engine can be turned a full 360 degrees and has reverse.

Right out of the box, the engine started on the second attempt, and it started easily during on-the-water testing.

The LP5.0 did a good job powering our test boat, pushing the 120-pound dinghy onto plane in just a few seconds. The boat hovered between 11 and 12 knots at its top end. Engine noise levels were about 75 decibels at idle speeds and above 90 decibels at wide open; regular conversation is about 60 decibels. This is a one-cylinder engine, so its going to be louder than multi-cylinder motors. (The Lehr 9.9 has two cylinders.)

Acceleration was equal to the gas engines weve tested. It packs a nice punch, and testers noted that it was refreshing to run an outboard and never get a whiff of exhaust or fumes. Unlike gasoline, propane is not toxic to the environment; however, its still a highly flammable gas. It can be dangerous when stored improperly, so be sure to follow to the American Boat and Yacht Councils standards for LPG gases (ABYC, section A).

Practical Sailor commends Herzer and Lehrs for their efforts to produce a greener outboard. The LP5.0 impressed testers. It performed well and is priced comparably to gas engines in its power range. Its also lighter weight and more portable than similar gas engines.

The only downsides that testers noted were the issue with the soon-to-be-revamped cowling clips and the tiller-side stowage. Another consideration for cruisers is the availability of propane. While propane is in ample supply in the U.S., it isn’t easy to come by in some far-flung foreign ports and special adapters may be required for re-filling the tank.

Given all the benefits of propane power, and the Lehr outboards comparable pricing, weight, and performance relative to gas-powered engines, PS highly recommends the LP5.0. It would serve well as a large dinghy engine or an auxiliary outboard for some pocket cruisers and daysailers. Those trying to reduce their carbon footprint will appreciate its cleaner fuel technology-and the bonus is that you will never have the maintenance headaches that come with using ethanol fuels in small engines.