We tested each product for glycol content using a refractometer and either the ethylene glycol or propylene glycol scale, as appropriate. In the case of Camcos Arctic Ban and Sudburys Winter Stor, some portion of the freeze protection is provided by ethanol, and such mixtures cannot be easily evaluated by any field method (test tape, gravity, refractometer) unless the exact proportion is known, which we find troublesome.

Unfortunately, there is no ASTM or generally agreed upon standard test for burst point; we used the same test as many manufacturers using 50-milliliter vials.

To test chemical compatibility, we reviewed past tests involving toilet joker valves and water system components, and dug into our leftover parts bin for some new tests with ethanol. We examined the parts for cracking and stiffening. None were horrible, but the result will vary according to concentration, temperature, polymer formulation, and winterizing agent formulation.

After repeated freeze/thaw cycling at 0 degrees, we pulled a small sample from the top of the duplicate samples and tested freeze point by refractometer. During partial freeze, ice floats, separating the water from the glycol, so the material at the top had lost as much as 7 percent of its glycol content, reducing protection-another reason not to rely too heavily on theoretical burst-point temperatures for determining the right concentration.

We also monitored evaporation at 70 degrees and relative humidity at 65 percent. Only the ethanol-based products were noticeably affected: as a result of evaporation, their freeze point was raised by 2 degrees. 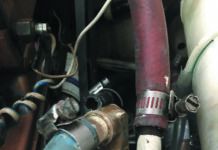 Leak-proof Unions Get a Second Look