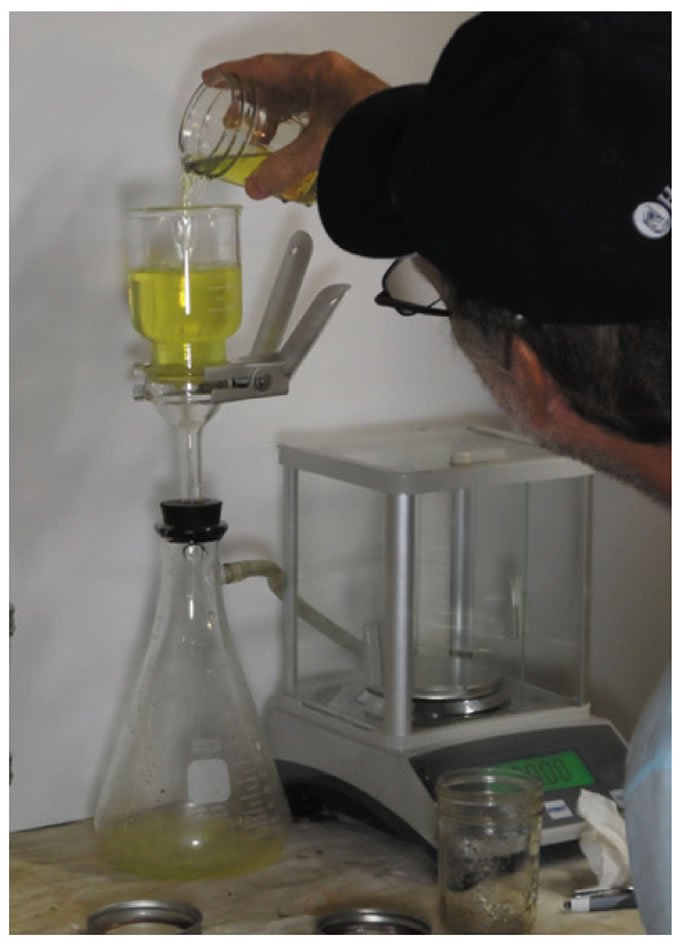 We followed standard boat test methods for storage stability. Diesel was tested using ASTM method D 4625, Standard Test Method for Middle Distillate Fuel Storage Stability at 43C. Samples were exposed to air for up to two years at 113 degrees (45 degrees Celsius). We settled on 8 months of exposure, which our experts determined would be the rough equivalent of about three years in our test location-although an exact correlation between test time and real time is hard to pin down. At the end of each period, samples were filtered, and the insoluble solids weighed.

Gasoline testing was similar, but it was run at 95 degrees (35 degrees Celsius) to limit evaporation; each day simulated about three days of real-world storage. We settled on eight months, the equivalent of about two years. The gasoline samples were evaporated to dryness, and the non-volatile residue measured using a gum test. For both diesel and gasoline, we used untreated samples as controls. All samples were dosed at vendor-recommended rates.

We also explored leaving diesel samples both 90 percent full and approximately 25 percent full. There has always been some debate as to whether it is better to fill the tank before storage to reduce breathing, or to leave room to add fresh fuel in the spring. We did not do this test for gasoline, since our past tests clearly indicate that storing half-full gas tank is a bad idea for many reasons-including an increased risk of explosion. The gasoline samples evaporated fairly rapidly and were refilled when they reached about half-full.

Our past tests indicated that some metals found in fuel systems can accelerate fuel aging. Because the samples in this test did not appear significantly aged at the six-month mark, we added metal corrosion coupons to one of the controls (all samples were run in duplicate), to see whether copper increased oxidation rates. These samples were aged an additional 2 months, to the same 8 month total age as all other samples and controls.

Weve been testing certain products on board a Chesapeake-based test boat that did particularly well in early testing: Biobor EB, Sea Foam, Star Tron Ethanol, and Star Tron Diesel. Our experience should be considered nothing more than anecdotal, since we improved our fuel-handling practices at the same time (generally keeping full tanks, using vent filters, and adding in-line filters on small outboards), but we can say that we graduated from routine fuel problems to not a single starting or running issue in the past four years with any of the six outboards and two diesels involved in testing. The carburetor bowls remained exceptionally clean.