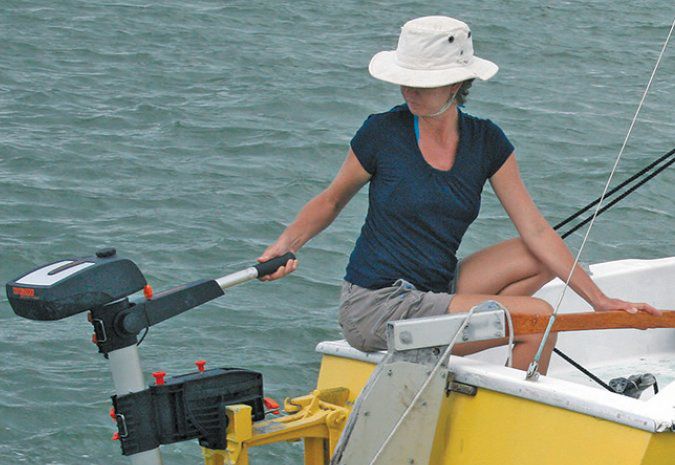 We’ve been following the Torqeedo portable electric outboard since our first test of the Travel 801 in 2008. Since then, we’ve put two of these motors into long-term service on test boats. Both are still operating with no major problems, but we have received a few reports from disappointed owners. PS reader US Navy Admiral (ret.) John Poindexter, who sails on the Chesapeake Bay, sent us an account of his experience with the Torqeedo.

The Torqeedo Travel 1003 was purchased in 2013 from West Marine at Annapolis Boat Show and saw little use. At the beginning of the 2017 sailing season, Poindexter tried to start the motor and received error E45 on startup. Torqeedo tech support said there was probably water in motor housing. Since the motor was out of warranty, he decided to open the motor housing.

Upon pulling the prop, he found inner and outer washers and prop-pin were badly corroded and in pieces. According to Torqeedo, these components are now made of more corrosion resistant material. It appears the rust from these components might have degraded the shaft seal, leading to further damage.

When he opened the prop side of housing which contained the reduction gear, there was a small amount of water. On the motor side of the housing, he found some moisture coating the electronics and corrosion on the outside of the electric motor, indicating that moisture had entered this area as well.

One way water might travel between these areas is by following the power cable conduit. The reduction gear side and the motor side has an opening where the power cables come down from the battery. This connection can be seen on the right side of Photo 3 (top right; indicated with an arrow); so there is communication between the two areas.

It appears the initial cause of the water intrusion was a failure of the O-ring seal on the motor side of the housing. There was no physical damage to the motor housing, fin or pylon.

Here are some other observations he made regarding the experience.

Owners should receive notice of the new prop shaft parts so that the more corrosion-prone ones can be been replaced.

The motor needs a better seal. Four screws seated in plastic hold the three-part (plastic-aluminum-plastic) assembly together like a sandwich and compress the O-rings. More screws from each side seated in the aluminum would allow more torque on the screws and more compression around the circumference.

The power and control plugs are very fragile and make it difficult to make a good connection.

Assemblers must apply a dielectric grease on the contacts regularly and be careful in screwing on the connectors.

He could find no detailed repair manual for users beyond changing the prop.

He could locate no exploded view of parts.

There is a lack of repair facilities-nothing in the Annapolis area which is sailing capital of the United States.

A two-year warranty is too short for such an expensive piece of gear.

Because of the complexity of ensuring a good seal, Torqeedo recommended replacing the entire pylon assembly, which extends from the motor to the battery. The price of this assembly is $631 plus shipping. They gave him about 30 percent discount, easing the pain somewhat. He said Daniel Witczak in customer support was very helpful with the technical details. Perhaps the design engineers at Torqeedo will take note of some of these observations as they develop new models.