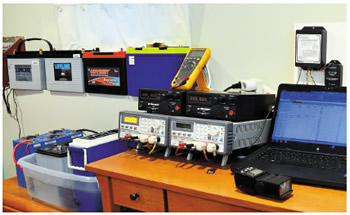 Each AGM battery we tested (see full AGM Battery Test Report here) underwent a minimum of five discharge and recharge cycles to a loaded 11.7 volts before being ampere-hour-capacity tested. This cycling ensured that each battery had cycled up to its rated amp-hour (Ah) capacity. If the battery did not cycle up to rated Ah capacity, we ran a few more cycles and tested again.

All batteries were cycled in a controlled temperature water-bath set to maintain the batteries at 77 to 80 degrees. Controlling the temperature is important when conducting 20-hour capacity tests on lead-acid batteries. Used by makers to indicate capacity, the 20-hour amp hour rating is the number of amp hours that can be drawn from the battery at a slow rate (capacity 20) for 20 hours before voltage drops below 10.5 volts.

After the batteries were cycled up, we carried out two complete, constant current, 20-hour discharge capacity tests, discharging to 10.5 volts, at 77 degrees. The two results were averaged to determine the baseline capacity.

The 11.7-volt discharge floor was based on real-world use. Sailors often decide it is time to charge the battery bank at this voltage. In reality, 11.7 volts is lower than you should discharge your battery. On our test batteries, this represented a 70- to 75-percent depth of discharge when discharged at the 20-hour rate.

This 11.7-volt cutoff was followed by a one-hour, timer-controlled recharge at .46 of the amp hour rating. This charge rate (46 percent of capacity), is the maximum we normally see on sailboats. For example, a 100-Ah battery was charged at 46 amps for exactly one hour. We charged all batteries at the same charge percentage rate, based on each batterys Ah rating, to be as fair as possible. With any test like this, it can be difficult to treat all batteries identically, but we tried as hard as we could to keep a level playing field. In our view, these results should not be taken as an empirical data set, but rather a glimpse into what and how partial state of charge use can affect your batteries.

At the end of the 30 PSOC cycles, each battery was discharged to 10.5 volts on cycle 31 and then recharged to 100 percent state of charge. The batteries were determined full at absorption voltage and 0.5 percent net accepted current. For the 100-Ah Odyssey battery, this was 14.7 volts and 0.5 amps.

For the final Ah capacity testing, each battery was left to float for an additional 24 hours after attaining 0.5 percent net acceptance at absorption voltage. The batteries were then left to rest for 24 hours before resuming testing. Each battery was charged in accordance with the manufacturers recommended max charging voltages.

Once fully recharged, the batteries faced another 20-hour discharge test to see whether the battery had lost any capacity. If it did not recover fully, a second capacity test was performed. If it did not come back to full capacity after the second cycle, testers tried (up to three times) alternative means of restoring capacity, as recommended by the manufacturer.

For discharging the batteries, we used two identical Array 40-amp DC Constant Load Capacity Testers. These test machines have the ability to hold current steady out to the thousandths of an amp while battery voltage decays. This is an important aspect of any capacity test as it is only valid if the discharge current can be held steady at exactly the 20-hour rate for the entire duration of the discharge test. The array testers utilize dedicated non-current carrying voltage sensing leads in order to terminate discharge at a precise battery terminal voltage.

For charging, we chose the BK Precision model 1900 Variable Bench Top Power Supply. These power supplies are capable of up to 60 amps of charge current and a maximum voltage of 16 volts. Both voltage and current can be set independently and are completely variable. These are highly accurate adjustable chargers that also utilize dedicated voltage sensing leads for accurate battery terminal voltage settings.

Our data-logger tool was a Bogart Engineering Penta Metric Data Logger, and this was used to create some of the charge and discharge curves accompanying this article.

We used a digitally controlled aquarium heater and a Rubbermaid tub to maintain water temperature. The water bath was a critical aspect of this testing, and without it, the test room would have needed to be at 77 degrees for many months.