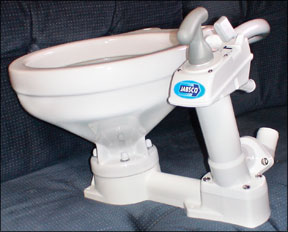 The last time we looked at marine toilets was more than seven years ago, when a beautiful bronze-bodied unit seemed almost affordable. Featuring nine heads from six manufacturers, the 2000 report focused on a comparison of pricing and design, supplemented by actual reports from boat owners (“Manual Heads: Raritan PHII a Best Buy,” Sept. 1, 2000). Based on those findings, Practical Sailors top choice was the Groco Model K, a higher-end unit that features a bronze pump and now retails for around $750. (It was a mere $450 back in 2000.) Two other expensive bronze pump models, the Wilcox-Crittenden Skipper and the Baby Blake, earned high recommendations. The Raritan PHII, which cost just over $200 at the time, ranked as the Best Buy. (This rating is now the Practical Sailor “Budget Buy.”)

But how much better is a more expensive head when it comes to real-world use? Despite many bench tests of manual flush heads over the last 30 years, Practical Sailor has never carried out a long-term test of two different manual flushing toilets on board a boat. The opportunity for such a test presented itself last summer, when software consultant and Practical Sailor contributor Mike Slinn (www.marnav.info) was in need of two new heads for his Beneteau First 435. Thus, with our resistance to bad puns exhausted, Practical Sailor plunged headlong into the abyss and began our head-to-head test of two different brands of toilet.

Based on past testing, budget, and time constraints, the initial contenders for this comparison were whittled to four: the Jabsco Compact Marine manual head, the Wilcox-Crittenden Headmate, the Lavac Popular, and the Raritan PHII.

After attempting to revive an existing Headmate (see “Reviving a Headmate?” facing page), we opted for another product: the Lavac. This simply designed toilet has a popular following among cruisers, and rated well in our previous test.

Although the Lavac looked promising, neatly concealing the associated plumbing into the head of our test boat would have been time consuming, and we were loathe to squander a second of the short summer cruising season in British Columbia. (See “Look for the Simple Lavac in Upcoming Head Tests”) Ultimately, we settled on the Jabsco Compact and the Raritan PHII, both of which were near drop-in replacements for the Headmates formerly installed on Slinns Beneteau.

The Raritan PHII was an obvious choice. Although the price of our previous “Budget Buy” has gone up significantly, it remains one of the most popular heads on the market. Installed as original equipment on many boats, the Jabsco Compact also commands a large share of the market. It is also one of the least expensive heads available.

So the challenge was on: In terms of installation, maintenance, ease of use, and, most importantly, reliability, which head would come out on top-the Raritan PHII or the economy-oriented Jabsco Compact?

Practical Sailor is currently working on a bench test of the toilets in this comparison as well as several other popular marine heads. This long-term evaluation aims to offer a different perspective. It will focus almost exclusively on the real-life installation and use of the heads. The test aims to be as objective and fair as possible, but-as with any project that involves a software consultants digestive tract-there are many uncontrolled variables. These will need to be accounted for in the final conclusions. We encourage readers who have experience with either of these heads-or any others-to submit their observations to the editor at practicalsailor@belvoirpubs.com.

The test protocol was straightforward. We ordered the prospective heads, examined the products and accompanying documentation, and installed the heads according to the manufacturers instructions. Customer service for each of the manufacturers was rated after testers contacted each at least three times. Once installed, the two finalists were immediately put into use.

As much as possible, the heads will be used equally during the course of the test period, and they will be maintained according to the manufacturers guidelines.

For this first report, both the Jabsco and the Raritan were used for two months while Slinn and his wife were cruising in British Columbia. At the end of two months of use, Practical Sailor had gathered enough data to make some recommendations. The long-term comparison of the two heads will be an ongoing project, with updates when there is something meaningful to report.

We found the Jabsco for $140 at Defender Industries (www.defender.com). The parts kit, also from Defender, was $65. This head is well packaged, with a good eight-page manual and many helpful pictures that make it easy to install.

Because the toilets base was longer than that of the Headmate it replaced, a new mounting platform was cut out of Starboard. Once that was taken care of, the head was easily installed in less than an hour. Throughout the summer, the head worked smoothly and easily. The piston-type pump is oriented at a slight angle off the vertical, which makes it easier to pump. Some squeaking was noted at the end of the test period, but it still was performing well without any apparent leaking.

Three sticky-back instruction sheets (in Spanish and English) came with the head, for application on and around the toilet. These were by far the best instructions for novices of all four of the heads we considered for this project.

Bottom Line: So far, we are quite happy with the Jabsco, but past experience tells us not too expect too much. (It rated low in the 2000 test.) It has begun to squeak slightly, but seems to be holding up well. The only other complaint was that for users with wide hips, the handle tends to stick in the thigh.

The Raritan PHII Standard Head is made by Raritan Engineering Co., based in Millville, N.J. Most of the parts, according to a spokesperson, are manufactured in the United States. Raritan also makes holding and water tanks, a rudder-angle indicator, waste treatment products, water heaters, and a marine ice-cube maker.

The price of the Raritan ($300 at Defender) has gone up significantly in recent years. Most recently, the list price jumped 13 percent. According to Raritan, this is partially due to the rising price of raw materials.

The PHII head is well packaged for shipping, secure enough that it will likely survive a flight into Kapingamarangi atoll (now an entry point into the Federated States of Micronesia), should the need arise.

The plastic base is only a quarter-inch thick. Although there are six bolts to help distribute the load, we used large washers between the head and the bolts for mounting.

A minor point worth mentioning is that the Raritan features four different shades of white while the Jabsco is of a more uniform white. A plastic skirt (yet another shade of white) is intended to improve the Raritan’s appearances, but we suspect that this will become a fertile field for mold. (The boats former toilet, the Headmate, faded to a uniform and unattractive yellow over the course five years of use.)

The Raritans 12-page manual is excellent. The PDF version, available from the manufacturers website, has color cutaway photographs of an actual unit, with the parts labeled.

The Raritan installation instructions were the only one of the four we reviewed to suggest an inline strainer. Since head odors (see “Fighting Odor with Hoses,” facing page) are often attributable to rotting seaweed or small marine organisms that meet their end in the holding tank, this should help reduce odor. The trade-off is an added expense, a potential source of leaks, and another maintenance point.

For mounting the head, 5/16-inch lag bolts worked best. The installation document suggests nothing smaller than a quarter-inch but does not specify the optimum diameter.

As with the Jabsco (and the Headmate, for that matter), there is no mounting template for the PHII. While it is easy enough to make a cardboard template, this is something the manufacturer should provide. Again, testers had to make some minor adjustments to the mounting platform on the Beneteau. We used half-inch-thick Starboard to make the platform a little deeper (front to back).

On both of these heads, there is a switch to control the valves that allow water into the head for flushing. To empty the head, the switch is put in the “dry” position. Initially, the Raritan pump seemed to require a bit more effort to clear than the Jabsco or the Headmate it replaced, but an improved hose run at the inlet solved this problem.

Bottom Line: The Raritan is more than twice the cost of the Jabsco, but the pump seems to be holding up slightly better. Practical Sailors previous studies have rated the materials used and the internal workings of this head to be superior to those on the Jabsco, but it will be interesting to see how much of a difference this makes over the long term.

So far, both the Raritan and the Jabsco rate higher than the Headmates they replaced. Considering the huge price differential, the less-expensive Jabsco is a surprise, although it seems to be slowly getting a little stiffer to pump. Also, a powdery black substance is accumulating below the pump handle. Presumably the rubber seal is starting to give way.

If you expect to use your head hundreds of times a year, or you plan to be cruising off the beaten path, the Raritan looks to be the better option of the two. But if you are keeping your boat in home waters, and cruising infrequently, the Jabsco offers an economical option. You can effectively buy two Jabscos to one Raritan, although its hard to put a price on the frustration associated with a broken toilet.