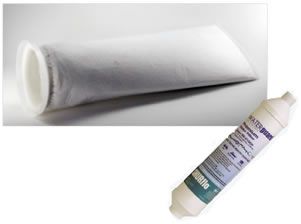 Water filtration isn’t rocket science, but some filter media is better suited for the marine environment than others. And, as we found in our test, some cartridge designs are better than others. Here are the most common types.

This filter media applies to pleated polyester, polypropylene, cellulose, and blends. Like an oil filter, pleated elements catch grit on the surface according to the micron rating. Some are impregnated with carbon, allowing them to claim some organic and chlorine removal, but based on our testing, any improvement is minimal, and you will be better served by a carbon-block filter at the tap.

For boating applications, avoid elements containing cellulose, as the bacteria will eat it, and the filter will collapse; these are only for continuously chlorinated applications, such as home filtration systems.

These are created from fuzzy strings of different types wound around a core in an X-pattern. The closeness of the overlap, degree of fuzziness, and tightness of the wrap determine the pore size. Because they are depth media (dirt is held not just on the surface but clear through), they commonly cost more but last twice as long as pleated elements before clogging, dependent on the nature of the dirt.

Much like wound elements in filtering characteristics, these are not commonly used for potable water systems.

Any fabric that can be sewn into a bag is a possibility, including non-woven materials and course monofilament screens. However, the most practical material for tap water filtration is polyester felt. Available in grades from 1 to 50 microns, the 1-micron grade seems best, able to catch much finer material and larger micro-organism. Available in many sizes from 4-by-8 inches to 8-by-32 inches, we find the 4-by-14 inch (trade size No. 4) most useful. These require either a special funnel or a more costly housing than universal cartridges.

Granulated Activated Carbon (GAC) is the cheap workhorse for removing disinfection residuals and foul tastes caused by organic material, and for removing traces of organic chemicals. Produced by partially burning coal, wood, or other carbonaceous materials, coconut shell is generally the best and most popular for tap-water filtration, though bituminous coal can be effective as well.

Different carbon types are optimized to remove different substances, both by altering the pore size to better match the target substance, and by doping the surface with attractants. GAC cannot be used on hot water; heat reverses the adsorption, releasing contaminants. Additionally, the adsorption capacity is finite, and there is no warning when the carbon can no longer remove organic contaminants.

Though chlorine and chloramines are not actually adsorbed by GAC (they are destroyed by chemical reaction with the carbon), the performance dropoff follows similar rules. Finally, because GAC tends to grow bacteria-the bacteria doesn’t eat the carbon, but it loves the organics that accumulate there- it should only be used in chlorinated or otherwise sterile applications. Although GAC filters seem to work, they can foster bacterial growth; they have no place on a boat.

KDF media, a patented mixture of zinc and copper, can either be used alone as an effective chlorine and hydrogen sulfide remover, or combined with GAC, where it contributes bacteriostatic properties and supplements chlorine removal. An acronym for kinetic dynamic flux media, this is a relatively new media, but it is well proven and accepted.

KDF combines the known bacteriostatic character of copper and zinc with redox reactions that chemically eliminate traces of sulfide and chlorine with great efficiency. The ability of KDF media to prevent bacterial growth in GAC filters is synergistic; those bacteria that love to occupy carbon beds, feeding off the organic, eventually coat the GAC particles, hindering access to reactive sites and often clogging the entire bed. We like GAC/KDM blends for hose-end filters and as part of a multi-step final filtration.

Carbon-block filters are a variation on GAC, but with differences and advantages that place them in a separate category. Manufactured from finely granulated GAC that has been pressed together with binder and additives, they have a much lower pore volume and consistent structure that makes them ideal for tap filtration. However, they are prone to plugging and are not appropriate for pre-filtration.

The primary certification body in the United States is the National Sanitation Foundation (NSF). Much like Underwriter Laboratories, it is a non-profit standards organization and an independent testing service. While NSF testing is critically important for final-barrier filters expected to remove cysts and bacteria, we will save that discussion for a future article on tap filtration. For pre-filtration, NSF certification is of secondary importance.