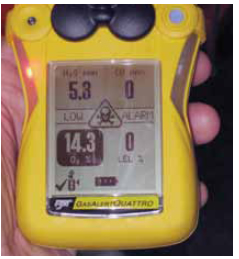 For a real-world test, we created a series of small but real-world holding tanks containing real sanitary waste. The sanitary waste was supplied by a 20-pound iguana. Ziggy already poops in a tray of water and we know this mixture to be plenty foul. This was supplemented with additional sanitary waste during the start-up period each spring. Seawater flush was used, as the odor problems associated with seawater are known to be more severe, the result of bacteria-reducing sulfate into more odorous sulfide chemicals. Tank tests were supplemented with field testing aboard a test boat on the Chesapeake Bay.

• One holding tank with a 1½-inch vent and 30 inches of hose to encourage aerobic conditions.

• One tank with an aquarium air pump to simulate the aerating effect of the Groco Sweet Tank System.

• A one-gallon deposit of sewage was added every three days.

• Odor and sulfide were measured after two weeks. Each chemical was tested four times: twice under summer conditions (high 85-100 degrees), and twice in the fall (high 50-65 degrees).

There is only one true measure of effectiveness: whether the vent stinks when the head is flushed. Since calibrating noses presents certain challenges, it’s nice to have an analytical number to compare as well. A hydrogen sulfide monitor, of the type used to test sewer gas, was used to back-up our sniff testing. At regular intervals, the vents were tested as follows:

• A ½-gallon of seawater was added to the 4-inch standpipe. This was used in place of sanitary waste addition so that all tanks could be tested at the same time under the same flow conditions.

• The standpipe valve was opened and hydrogen sulfide in the discharge gas was measured at the vent.

• An olfactory observation was made at the same time, about 3 feet downwind of the vent.

• At the end of the test period, the tanks were cleaned and the viscosity of the sludge observed.

Some vendors claim that their product contains live aerobic bacterial cultures that promote the breakdown of organic matter. Industrial experience indicates that such cultures do not remain viable for more than a few weeks in sealed (anaerobic) containers. To check this, we tested each of these by diluting in distilled water to normal use doses and then culturing on dip slides for 72 hours. Only one product, the now discontinued Vanish Odor, showed culture. None of the products tested were freshness dated, which would be required of a live product.