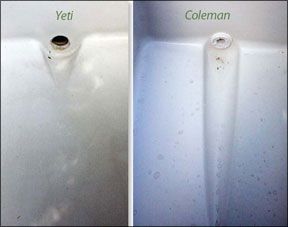 In a sailboat, “refrigeration” is a somewhat vague term. It could refer to a built-in, compressor-driven system designed to cool food and drinks as long as the ships power supply will allow. It could be a small icebox that relies on block ice to keep things chilled for a weekend cruise. It could be a thermo-electric cooler like those tested in the April 2007 issue, or a 5-gallon bucket filled with cubed ice that-hopefully-will keep a six-pack chilled till sunset.

Somewhere in the middle is the portable ice chest, which uses block or cubed ice and-if its a worthy one-can keep its contents cold for multiple days. For small-boat owners who lack the luxury of an electric fridge or the convenience of an ice box, a large ice chest is an effective food storage solution for a weekend voyage or coastal cruise.

Ice chests come in all shapes and sizes. For the purposes of this test, we narrowed the field to portable 65-quart coolers from Yeti and Engel and a relative of the winner of our most recent test (December 2005), the 70-quart Coleman Ultimate Extreme Marine.

These big boys can weigh 40 to 50 pounds when fully stocked, so we use the term “portable” loosely. Popular among offshore anglers, theyre made more to act as a stand in for a refrigeration system than as a daysailors cocktail cooler.

The purpose of this test was simple: compare the effectiveness of each cooler at keeping ice. So we resurrected the ice-melt test from the 2005 test, and for consistency, tried as much as possible to repeat the protocol.

As before, testers placed a room-temperature six-pack of soda in the bottom of each cooler, and then covered it with 16 pounds of carefully measured cubed ice. At intervals of 12 and 24 hours, the coolers were drained of melt water and the amount measured in a graduated container. Testers didnt open the coolers, which would have more accurately simulated real-life usage. The test was repeated twice, once beginning in the evening and once in the morning. When it became clear during the melt-water sampling that no ice remained in one or more of the coolers, testers opened the coolers, measured the remaining ice if there was any and took the temperature of the sodas. Had we been trying to determine the maximum time each cooler would keep its cool, we would have used more ice and would not have drained the melt water.

Ambient temperatures at the test site ranged from 94 degrees during the day to 77 degrees at night.

Because insulation can hold in heat as well as cold, Yeti was concerned that the small amount of ice used in testing (about a third of what Coleman recommends for its 70-quart cooler) put the more insulated coolers at a disadvantage. Because we werent looking for maximum temperatures or chill time, we believe our protocol was fair, but will be looking into ways to revise it for the next test.

The Coleman and the Yeti were fairly evenly matched, while the Engel was clearly the best at keeping ice.

At the end of the second round of testing (morning start), which lasted just 29 hours, the Engel still had about 6 cups of ice in it, the Yetis ice was completely melted, and the Coleman had just more than 1 cup. The sodas from all of the coolers were about 35 degrees, with no discernible difference on the palate. Although testers could not determine precisely how much longer the Engel kept ice compared to the others, the results indicate that it was probably about eight to 12 hours.

Coleman is a Kansas-based company thats well-known for its affordable outdoor gear. Practical Sailor tested the companys Xtreme Marine (6270A798). Colemans Ultimate Xtreme Marine (50 quart wheeled and 58 quart) rated highest in 2005, but testers felt that the Xtreme was a better size match for this comparison.

Made in the USA, the polyethylene Coleman Xtreme was the lightest-weight cooler tested. It also was the only one to feature 7-inch rigid, molded plastic handles, which were more comfortable but not as durable as the others rope handles.

Coleman claims the Xtreme can hold ice for five days. The largest cooler tested, the Coleman was at a slight disadvantage during testing because the others were given the same amount of ice to cool a smaller space. The polyurethane-insulated lid opens on stainless-steel hinges, but it lacks a positive locking latch. The hinges are attached with four beefy screws, but the setup is less rugged than that of the Yeti and Engel.

The Coleman was the only test cooler to offer integrated cup holders in the lid and a molded-in ruler for easy fish-measuring. The ice chests white, matte finish has fewer molding imperfections than its competitors, and it is made with a UV/IR additive to reflect the suns ultraviolet and infrared rays. The Coleman does not have nonskid feet, so it would need to be lashed down onboard.

The Coleman drains by way of a hollow in the cooler bottom-the longest and widest channel of those tested. However, the drain hole is about an inch above the cooler bottom, so some water remains even after draining. The drain has a flip-top plug that is affixed to the cooler, so it wont get lost during draining.

Bottom line: The Coleman performed slightly better than the Yeti, but at a fraction of the cost-$85 vs. $285-making it our Budget Buy. Its light weight is a real bonus, and its strong enough to suit most sailors.

Cooler manufacturer Engels U.S. branch is based in Jupiter, Fla. We tested the smallest model (65 quarts) in the companys new line of marine-grade ice chests made for sport fishermen.

The ENG65 is made of roto-molded polyethylene, much like plastic kayaks, and has seamless construction, so it can take a beating. It and the Yeti Tundra we tested are very similar; theyre basically set apart by various features, small details, and mold quality. However, the Engel outlasted the Yeti and Coleman in both ice-retention tests, giving up the least amount of melt water.

The ENG65 has 2 inches of polyurethane foam for insulation and a freezer-grade gasket, as does the Yeti. Engel claims that the cooler, when filled with ice and kept in the shade, with an ambient temp of about 85 degrees, can hold ice for eight to 10 days. Our more rigorous tests found that the Engel still had some ice after the 27- and 50-hour marks, more than its competitors.

The handles are stiff, braided non-stretch polyester rope with sections of PVC plastic for handholds. They are designed to be easily replaced.

The Engel hinges are integrated, molded plastic with aluminum pins-a setup similar to the Yeti. The flip-up rubber and plastic latches are designed to flex if you strike them. They arent as foolproof as the Yetis, but they are as easy to replace.

The $265 Engel offers only a one-year warranty. For that money, wed like to see a longer warranty.

Bottom line: The Engel comes with a hefty price, but it is a top-quality cooler that could serve as a refrigeration solution for a short cruise. Its the Best Choice.

While the Yeti and Engel both carry 2 inches of insulation, the Yeti fell short in our ice melt test. Yeti makes no claim as to how long it can retain ice. Yeti CFO Ryan Seiders explained, “There is no industry standard for measuring ice retention.”

The Yeti has a smooth finish with a nonskid top, while the Engel and Coleman have matte finishes. The Yetis shiny surface is easy to clean, but scratches will be more apparent, in our opinion.

Both the Engel and Yeti have nonskid feet and tie-down systems (sold separately) to help keep them in place.

The Yetis handles are nylon rope with ridged, soft plastic handholds. Testers found these to be adequate but not as comfortable as the rigid handles. The Yetis handles can be easily replaced by untying a knot in the rope.

Testers liked the simplicity of the Yetis latch design. A single, T-shaped piece of rubber swings on a hinge and locks into molded-in keepers. The latches are held in place by aluminum pins. To remove the pins and repair/replace the latch, all you need is a flat-head screwdriver. The process is simple.

The Yeti plug has a smaller diameter grip on its drain plug than the Engel, making it slightly more difficult to open. The bonus to this, however, is that it is a low-profile design-one less toe stubber aboard.

The Yeti was the heaviest cooler tested and the only one that comes with a dry-goods rack. It also offers the best warranty (three years), and comes in white or desert tan.

Bottom line: The Yeti has some nice features and the best warranty, but it didnt retain ice as well as the others.

If youre in the market for a quality ice chest to serve as a fridge for a short cruise, we suggest the Engel ENG65, the Practical Sailor Best Choice. It is expensive, but it was our top performer, and if you buy your ice, youll end up saving money over the long haul.

For those more budget conscious, the Coleman is our Budget Buy, but don’t count on it to last as long as the more expensive ice chests. 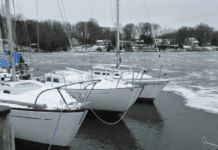