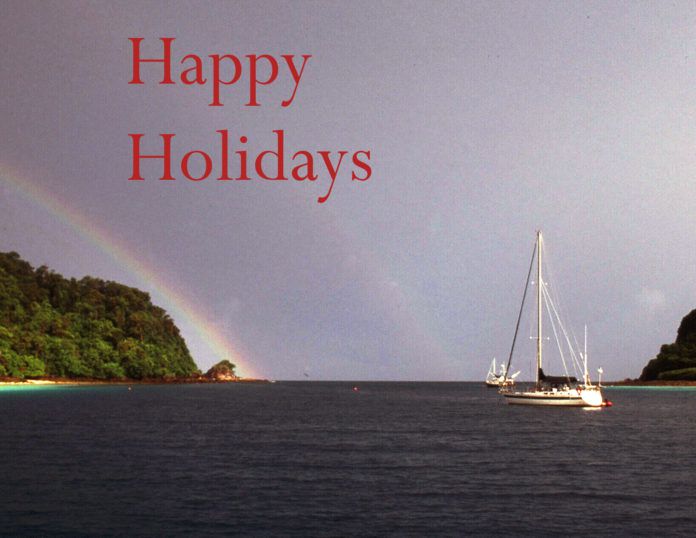 Night Before Christmas
(Somewhere in the Pacific)

‘Twas the night before Christmas, and the crew couldn’t sleep.
The waves were relentless, with troughs dark and deep.
The windvane was holding a course straight and true,
toward a spot on the chart that read “isles inconnues.”

As Cap tried to revive his salt-soaked GPS,
Ma delivered the news. “This ship is a mess!
The diesel won’t start. The stove‘s out of gas,
and your fancy new flashlight is a pain in the ass.”

She broke out the sextant and slugged down some rum,
“Give up on your gadgets. I’ll get this ship home!”
The moon on the water allowed just enough light
to define a horizon. She began taking sights.

The cocked hat on the chart was not as small as she hoped.
She placed an X in the middle, refusing to mope.
“Silly men and their toys,” she said with a smile.
“Bring our ship almost there, then leave us the last mile.”

She raised the atoll at dawn, but the pass, it looked bad.
No way they’d attempt it . . . but then out came a lad.
His boat was no bigger than an island canoe.
“Follow me!” he shouted. “I know just what to do!”

He revved up his outboard and hugged the east shore.
Cap took the tiller and ordered, “Sheet in some more!”
The current was ripping, and whitewater raced.
Cap’s pulse held steady, a look of calm on his face.

When they cleared the last coral head in the lagoon,
Cap ghosted gently to the dock on pontoons.
Ma took the bowline and gave it a twist.
When the spring lines were set, they softly bumped fists.

“You’re a pretty good sailor,” Ma said with a grin.
“But your navigation,” Cap said, “is what got us in.”
That night they slept well beneath glittering stars,
soothed by a dream—that a good heart can go far.

Happy holidays to Tim, Ralph, Ann, Frank, Judi, Kerstin, Alison, Pilar, Michael, Mallory, Drew, Dave, Bill, Dan, Jonathan, Nancy, John, Rod, Theresa, Erin, Tom, Amanda, Doug, Nick, Stan, Paulina, Skip, Ken, Carol, and all the staff, contributors, subscribers, letter-writers, online commenters, fact-checkers, and countless superheroes in their little canoes who have helped guide Practical Sailor through the past 49 years. And thanks to all those no longer with us, but whose spirits still lifts our little ship toward new horizons.