The antifouling coating industry is dominated by copper-based paint, so as copper prices reach their highest levels in recent history, I was curious to see how that was impacting the price of bottom paints. About two-thirds of the paints on the market rely on copper as the principal biocide, but boaters have a few of things working in our favor to keep prices down:

1) More stringent regulations in countries around the world and in the US is prompting research and development of alternatives to copper-based paints. During the past 15 years, several copper-free alternatives have gained a loyal following based on our reader surveys.

2) Paint manufacturers use purchasing strategies to hedge against market fluctuations, so price increases are usually not so sharp. These also extends the already long lag time between raw material market prices and retail prices. Given the slow-down in boating (and shipping) caused by COVID-19, it is likely that the leading manufacturers are still drawing from surplus raw materials purchased before the current price surge.

3) Rosy forecasts for the antifouling coatings industry is increasing global competition.  Although the impacts of this competition is most evident in the commercial markets and isn’t a huge driver of prices in the US recreational boating market, which is dominated by just two companies (Kop-Coat/Pettit and Akzo Nobel/Interlux), international cruisers should benefit from the increased competition.

Based on my brief scan of major online retailers we’ve used in the past — Defender Marine, Jamestown Distributors, and West Marine — it looks like some of our recommended antifouling paints have seen modest price increases of about 10 percent over those we posted in 2017. If you buy your own paint, it can pay to shop around, as prices can vary as much as 20 percent. If you are price-shopping online, also be sure you are comparing apples to apples by including the shipping costs, which can be significant.

Despite increasingly strict prohibitions against Econea and some of the other more effective copper-free biocides, paint manufacturers have been able to develop copper substitutes that deliver comparable performance over the short term. As far as prices for these copper-free paints are concerned, some specialized manufacturers like Epaint have been able to maintain stable pricing over the past five years. Other “green” paints, especially the solvent-based Econea paints have tracked the increases reflected in the copper paints.

How effective are these copper-free paints? It really depends on the environment. Most of our recent testing has taken place in Sarasota Bay, where we’ve had mixed results. With a couple of exceptions, very few of the copper-free varieties have repelled hard growth past the 18-month mark. We do believe that with careful scrubbing strategy, you can stretch two seasons out of the best eco-friendly paints in areas with “normal” fouling. For the person who hauls once a year, these are a legitimate alternative in many environments, but you should definitely check with the local boatyards to get a clear picture of performance. 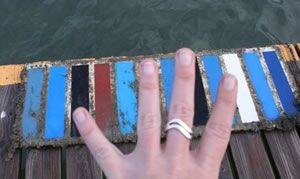 The above photo shows what a crop of eco-friendly paints look like after six months in the water, after they were sluiced once with a 5-gallon bucket of saltwater. You’ll see that most of the slime had easily rinsed away. It is likely that using your boat will have the same effect, washing away most of the slime growth as it moves through the water. But if you sit at the dock, this soft growth can open the door for barnacles and other hard growth.  My previous post showed a photo of them prior to being sluiced. As you can see from that image, the slime was fairly thick, but almost all of the growth that remained on these six-month panels could be easily wiped away with a sponge.

The above photo also shows the simple method we use to record data for our image files — four fingers equals panel four. Each panel is identified by a unique number of holes drilled in it (four in this case). The number of holes coincides with numbers on an Excel table that is filed when each panel is painted. Judges are given a copy of the same table, with only the coded number for the panel and the color of the paints in sequence. On the six-month panels, the holes, just like almost every unpainted surface, were clogged with barnacles. Testers actually had to punch through the growth with a screwdriver, just to confirm the panel identification.

If you look on the top left-hand corner of the panel in the photograph, you’ll see four holes, indicating that this is Panel 4. After the panels are rated, the ratings taken at the test site-Poor, Fair, Good, Excellent-are matched up with the paints identified on the master Excel table.

This system has allowed us to keep track of as many as 200 paints in three different locations. Because the paint formulas we test do not change significantly over the years (any changes require an expensive and time consuming journey through EPA pesticide registration process), we’ve since pared down our testing program to one location.

During each test season, we also apply some of the test paints to boats that will be sailed and monitored for as long as the paints are effective. The boat is divided into four quarters and two paints, A and B, are applied to the hull in a checkerboard pattern as follows: Paint A, port stern quarter; Paint B, starboard stern quarter; Pain B, port bow quarter; Paint A, starboard bow quarter. This assures that as much as possible, each paint gets equal exposure to sunlight that can promote soft growth.

We are currently ramping up a new test in brackish water environment in Cheseapeake Bay. Many PS readers keep their boats in estuaries and river mouths where the mingling of salt and fresh water combine with nutrient-rich runoff to create an extremely fertile environment for biological growth—both soft and hard.

If you keep your boat in a brackish water marina, harbor, or bay, we’d be interested in hearing about your experience with antifouling paint. You can comment below, or email the editor here.