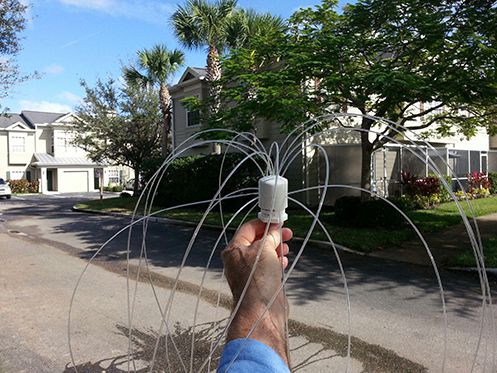 As we found in our last major test of bird deterrents, there is no perfect solution for every bird problem, but we’ve come across one that seems to work well in the Florida marina where we kept one of our former test boats, an Endeavour 42 Lost Boyz owned by boat builder Robert Helmick. The main perpetrators in this particular marina are starlings that feed on the berries near the marina then apparently find a comfortable roost to digest (and deposit the remains of) their meal. Sailboat masts seem to be the preferred perch, as the dockmaster reports that he rarely sees them atop powerboats.

The top of the mast poses a special problem. First, unless your mast is down for the season, it is a difficult place to install any kind of deterrent. Second, even if you do have easy access to the top of the mast, it is hard to find a place to mount any deterrent that wont interfere with antennas, lights, or wind sensors that are already fixed at the masthead. In addition, adding any substantial weight at the top of the mast is to be avoided.

A temporary deterrent that can be removed when you are sailing seems to make the most sense. Lately, we’ve been experimenting with various deterrents mounted on a long 1.5-inch diameter PVC pipe that extends above the mast. (The diameter of the PVC isn’t really important, it depends on what deterrent you use.)

The idea is not new, and there are many different variations. Our current design is based on one we borrowed from our neighbor in the marina slip across from us. The deterrent on his boat is a bird-like kite (see photograph above). In addition to the PVC pipe, he uses an inexpensive fishing rod that is epoxied into the top of the PVC pipe. This seems to help the kite fly better even in still air, and offers a lighter-weight extension. Even in very light air the bird bobs above the mast and this seems to be enough to keep the starlings away.

Two other boats in the marina have adopted the system and it seems to be working well. Im not sure the kite has to look like a bird. Simple diamond-shaped kites have been used for centuries to keep starlings out of rice paddies in Asia for centuries.

Our own variation doesn’t use a kite. Developed by Robert and his 14-year-old son Kameron, the deterrent uses an upside-down spider-like contraption similar to those profiled in the 2010 article. Instead of wire for the legs of the spider, we are using stiff 100-pound monofilament line (see photo). These are threaded through the end-cap of on the PVC pipe and spread outward in various directions like a springy petals of a flower.

Although our arrangement is less cumbersome and more durable than the kite deterrents, it does not seem to be working as well as the kite. Part of the problem seems to be that the monofilament legs don’t always extend over the top of the mast. Because our system is a physical barrier as opposed to a scare device, complete coverage is important. Perhaps stiffer wire would work better, but we like the monofilament because it makes it easy to lift and lower the PVC pipe.

The basic setup is pretty simple; you just need to decide what you want to put at the top of the PVC pipe and where on the pipe you want to attach your spare halyard. You need two attachment points to the pipe to keep it near vertical. One at the bottom and one that is further up the pole. For the kite-like device, the second attachment point can be less than a quarter of the way up the pole; this keeps the kite angled away from the mast where it wont tangle with the rigging. Putting a stopper knot in the halyard and running it through the pipe itself is also an option.

If you want the pipe to stand directly over the mast, or nearly so (as our spider-like device requires), then the higher attachment point works better; ours is about one-third of the way up our ten-foot pipe. For attachment you can drill a large hole in the PVC and pass the line through it, or you can install a ring-eye, which would make it easier to clip and unclip with a snap shackle. A modified gripper hitch, or similar gripping hitch like those we tested will work also here.

Of course, this system probably wont deter birds that like to roost on decks or rails, like seagulls or cormorants. Our 2010 test described a few of that are designed for keeping these birds away. Bright reflective tape strung in the rigging or on a clothesline around the boat seems to be a cheap and effective deterrent in our area.
Sometimes called holographic tape, this tape can be found in many gardening stores, or online under the names Irri-tape, D-bird, or Defender Tape.

If you have a serious bird problem, check out our 2010 article for more ideas. If you have created or come across an effective homemade bird deterrent, wed love to hear about it. You can send photos or a description by email to practicalsailor@belvoir.com, or post a description below in the comments section.