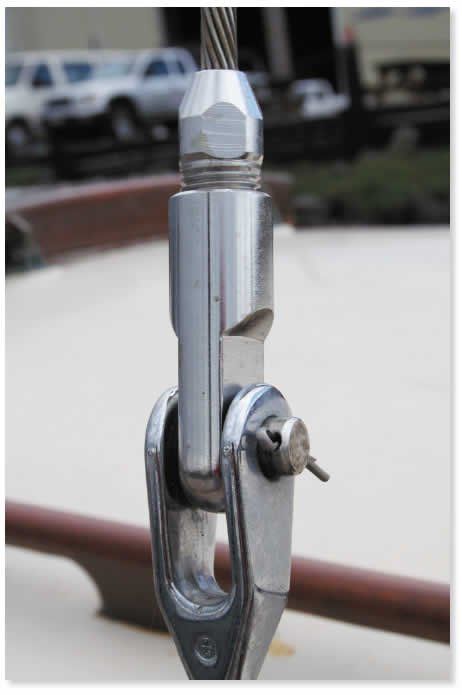 Swageless wire-rope terminals have long been a favorite piece of rigging kit among all kinds of sailors. These terminals are inspectable, reusable, and can be assembled with simple hand tools. But for all of their acknowledged advantages, data is scarce about their mechanical efficiency. How much, if any, do they weaken the wire rope they are attached to?

To answer this question, Practical Sailor worked with well-known rigger Brion Toss of Port Townsend, Wash., to conduct destruction tests on Hi-Mod (Hayn), Sta-Lok, and Norseman terminals, the three major brands used on sailboats. These mechanical terminals were previously reviewed in the June 2015 issue. For this test, Toss also included poured-socket terminals, which are common in industrial use, but are rarely used on sailboats.

Before we get to the results of the tests, some background is needed. First, ultimate efficiency, though desirable, is not the most important consideration when selecting wire-rope terminals. Corrosion resistance, fatigue resistance, proper scan’tlings, proper tune, proper use, and quality of metallurgy and machining are all more likely to prevent rigging failures than ultimate strength will. This is because, given a reasonable safety factor, rigging afloat or ashore is very unlikely to be stressed anywhere near its breaking strength, but the world is always acting to corrode, fatigue, and otherwise break it.

On the other hand, all other things being equal, a strong terminal is obviously better than a weak one. For example, lets say you arent worried about losing a mere 10 percent or so of strength due to the terminal. After all, that wire, in a well-designed cruising rig, would rarely see loads much over 30 percent of its rated strength. So you should have no objection to using a hacksaw to cut through two of the wires 19 yarns, because that would merely result in a bit more than a 10-percent loss of strength. But of course, you would never do that. Strength matters, if only to provide a greater reserve against decay, miscalculations, shock loads, etc. Thats why 100-percent efficient terminals-those that spread rigging loads most efficiently and do not weaken wire rope-are the standard by which all others are judged.

Which brings us to the next problem: 100 percent of what? Although the best wire-rope manufacturers might arrange for frequent destruction tests to determine actual wire strength, all they really need to do is to meet a standard-rated strength, published by various standards organizations, for a given material and construction. That way, designers and users have a reasonable idea of the minimum strength of the material they are using, and manufacturers don’t have to attach actual breaking strength figures to every batch of wire they make.

Because the rated strength is the result of calculations and not actual testing, there will nearly always be some discrepancy between a wires rated strength and its actual strength, and this discrepancy complicates measuring terminal efficiency. This discrepancy is a key consideration, and if we don’t take it into account, destruction tests will be misleading.

This can be more complicated than it may seem. Imagine you have a very good wire rope. It is a full 20-percent stronger than the official rated strength. Apply a very bad terminal to it, one that weakens the wire rope by about 20 percent. Put the wire on a testing machine and break it. If you were going only by the wires rated strength, you might think your terminal was 100 percent efficient, when in fact it had weakened the wire by an amount equivalent to sawing through almost four of its 19 yarns.

Now imagine that another terminal, attached to the same wire rope, only weakens the wire by 10 percent. Now a test will show that the wire rope has somehow achieved a strength of 108 percent (120 x 0.9). This is of course impossible, at least in this universe; a wire can’t be stronger than it is.

By the same token, you could put a 100-percent efficient terminal on wire rope that was so poorly made that its actual strength was a full 20-percent less than its rated strength, and to the uneducated person, the results of a break test would show clearly that the terminal weakened the wire rope, when in fact it had not.

To avoid these potentially misleading results in our tests, we simply disregarded the rated strength of the wire, and recorded the actual break loads achieved by each type of terminal. That way, we could determine the terminals relative efficiency. As you will see, this resulted in a fairly wide spectrum of results, with the best terminals approaching 100-percent efficiency. The worst terminals produced failure numbers that were much lower.

Since the actual strength of wire rope varies-not just from manufacturer to manufacturer, but from batch to batch-the wire itself can be a variable. Producing an optimally strong wire rope involves obsessive attention to variables like metallurgy, extrusion, yarn twist, relative yarn tension, etc. Therefore we used a wire with a long history of high quality, as verified by repeated independent testing, and we arranged to have all of our wires taken from the same spool. We did this for each diameter of wire that we tested.

It is relatively easy to determine the tensile strength of wire rope, but a little trickier for testers to be sure that their reading of the terminals efficiency is fair. This is because, entirely apart from their design and the quality of their manufacture, these terminals have to be fitted on the wire ends by human beings, who may or may not be following the instructions. Mechanical terminals like the ones we tested are frequently applied by non-professionals, who might lack sufficient judgment on what constitutes a good assembly.

To be fair, some professionals also make assembly mistakes, and make the same ones over and over again. No one is immune to error. For our tests, we double-checked the manufacturers instructions every step of the way, as well as the dimensions of all the parts, to make sure they were the right parts. We suggest that you do likewise when you are assembling your own terminals; results can vary dramatically, depending on the quality of your work. The accompanying sidebar on assembling mechanical terminals offers some tips and advice for first-timers and pros alike.

The three mechanical terminal brands we tested were Hayn Hi-Mod, Sta-Lok, and Norseman. The Norseman terminal has been around the longest and is found on sailboats all over the world; however, Norseman recently ceased manufacture. (Not to give anything away, but this might have been a good thing.)

The Sta-Lok is a younger cousin of the Norseman. Sta-Lok is known for great quality and excellent customer support.

Hi-Mod terminals are the new kids on the block, having been introduced about 10 years ago. They are distributed by Hayn, a company renowned for technical soundness and customer care.

The poured sockets we tested came from Port Townsend Foundry in Port Townsend, Wash. Unlike the mechanical terminals, which are made of type 316 stainless steel, the Foundry sockets are made of aluminum bronze.

We broke all of our test sample terminals and sockets at Oberts Marine Supply, an industrial yard in south Seattle. Oberts hydraulic testing machine has a break test capacity of 200,000 pounds, so our samples, the strongest of which were rated at 22,000 pounds, were not a strain for it. The machine is regularly calibrated and certified.

With each sample, testers increased tension slowly to a minimal tension-about 1,000 pounds-then checked to see that all connections were sound and lying fair. Then we increased the strain to a working load-3,000 pounds for most samples-and paused again. Testers then increased the load at a steady rate until the rigging failed.

We worked with a very small sample size, with at most four breaks for a given brand and wire size, but results among samples varied by less than 6 percent for each brand of terminal, and most differences were less than 3 percent. We were able to reuse all of the mechanical terminals and sockets, with no loss of ultimate efficiency.

The poured sockets, in both 5/16-inch and quarter-inch, were the most efficient, scoring averaged breaking loads of 12,890 pounds and 8,220 pounds, respectively. This was not a surprise, as poured sockets are recognized throughout the rigging industry as being highly efficient. Further evidence that we were getting toward 100-percent efficiency came from the fact that our socket breaks tended to break in the clear, or well outside the terminal. All of the other samples broke at the ends of their terminals, or even inside them.

Each terminal broke at a lower load than the sockets. We therefore recorded the socket numbers as 100 percent of wire strength, and listed all other results relative to the sockets breaking loads.

The Hayn Hi-Mod and Sta-Lok terminals were neck-and-neck in the 5/16-inch size, with average results of approximately 12,300 pounds breaking load. This puts them at 95.4-percent efficiency.

We did not test Sta-Lok in quarter-inch wire, but the quarter-inch Hayn achieved a one-test result of 7,800 pounds, or about 94.8-percent efficiency.

The Norseman fittings averaged 10,770 pounds in the 5/16-inch size, giving them a paltry 83.5-percent efficiency. Even on extraordinarily strong wire, these terminals reduced wire strength to barely above rated strength.

Rig failures are far more often the result of fatigue, corrosion, etc., than of terminals mechanical inefficiency. But it makes sense to start with the most efficient terminals you can, to keep your rig as far as practicable from the possibility of failure. This test indicates that the most efficient fittings are poured sockets, followed closely by Hi-Mod and Sta-Lok terminals. Because the Hi-Mod was the easiest to work with, it got the Best Choice pick by a nose.

-Brion Toss is a professional rigger, author of The Complete Riggers Apprentice, and owner of Brion Toss Yacht Riggers (www.briontoss.com).