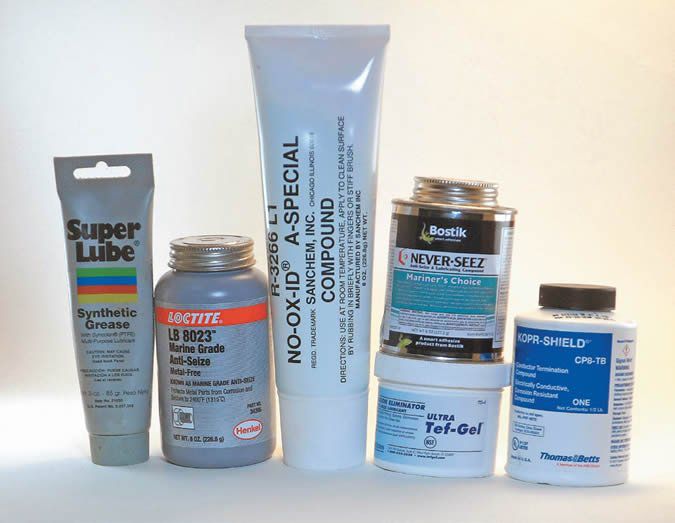 If you’ve ever been humbled by a single impossibly stuck fastener, or plan on adding hardware to your spar, running gear, or deck, this report on anti-seize protectants is right up your alley.

If you own a boat, you need a corrosion-fighting regimen. We’ve tested a boatload of products to protect your boat, but each case is a little different, sometimes calling for a different treatment (see adjacent story). Perhaps you just smear some waterproof grease or lanolin and hope for the best? Or perhaps you’ve bought into the advertising puffery that anti-seize products fight corrosion by isolating dissimilar metals? (Oddly, some of these same products also advertise their conductivity in electrical connections).

In fact, these heavy-duty protectants all rely in some part on their grease-like consistency to get the job done. Some are primarily lubricants focused on preventing wear, while anti-seize products focus on keeping air and water out and adhering well, even when forcefully doused with water or immersed in it. Actual results with each type of product vary with the product and the metals involved.

Most corrosion in a marine environment is the result of dissimilar metals in the presence of an electrolyte. A stainless-steel bolt in a lower unit and a carbon steel bolt on the engine present completely different chemistry. At ambient temperatures, the corrosion inhibitors function both by scavenging oxygen and by coating the metal surfaces with an organometallic film.

However, at high temperatures (above 400 F) organics burn off and grease slowly turns to carbon. Temperature cycling and differential expansion create extreme pressures, and prevention of seizing and galling comes down to the effectiveness of solid films and the magic of inorganic chemistry.

Some of the products we tested for this report are loaded with metal or inorganic particles; Kopr-Shield contains a fine dispersion of copper, and Bostic Never-Seez contains nickel powder.

This approach may work at high temperatures, but prior testing ( see Conductive Grease vs. Corrosion, PS April 2017), only increases dissimilar metals corrosion in a wet environment. Thus, there are metal-free marine formulations that rely on dispersions of inorganic solid lubricants. Since our testing is at ambient temperature, our results may not apply to the engine room. (The adjacent article highlights our previous tests of anti-seize coatings for engines and running gear.)

We also tested a few anti-seize products that were recommended by folks who have turned a lot of wrenches; Kopr-Shield, Loctite Marine Grade Anti-seize, and Bostik Never-Seez.

We did not test Duralac, which is more of a coating than a conventional anti-seize. A barium chromate primer that functions like a gasket, Duralac physically prevents electrical contact, in doing so fights corrosion. This product is popular among some riggers, but it is restricted for sale in some areas since barium chromate is a suspected carcinogen.

The true test of anti-seize product is whether you can remove the fasteners later. We tapped holes in an aluminum mast section for #8 stainless machine screws. A carbon steel plate was drilled for -inch bolts to simulate engine and trailer fittings.

We applied the test product as directed, tightened down and recorded the torque, and then left the samples hanging under a dock for 18 months, just above the high tide line so that they would be immersed during spring high tides, dry during neaps, and enjoy high humidity all the time. We installed extra control samples so that we could monitor the progress of corrosion and seizing.

After 18 months of tough exposure, the aluminum mast section was lightly corroded around the fastener holes and the edge where we cut it to expose the raw alloy. Fasteners coated with Green Grease, Lanocote, Tef-Gel, and Loctite LB 8023 required about the same torque to remove as when they were installed, as though they had been installed the day before. Other products were more difficult, but none were a real battle.

One reason for this is that we used Allen head screws, which provide a tight fit for the hex key; if we had used Phillips head fasteners, the less effective products (rated Fair or Poor in the adjacent table) and the control would have been a struggle. Lesson: use hex-head or Allen fasteners whenever possible.

Not surprisingly, the fasteners bedded in plain steel were more difficult to break free. The steel plate and bolt heads showed significant rust.

In fact, had we waited just a few more months, we would not have been able to remove any fasteners that weren’t coated with the most effective anti-seize products.

Before removing each bolt we lightly chipped the rust away. A six-point wrench was then firmly tapped onto the head, and firm vertical pressure was applied to keep it there. Even with carefully applied pressure, five of the six control fasteners and several product-coated fasteners snapped when we tried to remove them.

We did not use heat, impact wrench methods, or penetrating oils, although we’ve tested plenty of these-see adjacent article. Green Grease was the only ordinary lubricant that made any measurable difference, but we suspect that protection would only have lasted another month or so.

A top performer in our waterproof grease testing (See Budget Priced Winch Grease, PS February 2017), we’ve used this countless times on all sorts of fasteners, when it was the first thing at hand.

We’ve been a little disappointed when we used it on outboard lower units, outboard clamps and spars (aluminum), and in testing it did not shine as an anti-seize.

Bottom line: Not a great anti-seize, but still one of our favorite greases.

This is another synthetic grease like Green Grease. It is widely available and popular with boaters for protecting everything from trailers to outboards.

Bottom Line: While it may serve its purpose in other realms, it did not shine as an anti-seize.

Lanocote was a top performer in our grease wash-off testing (PS March 2017). It has been our go-to product for most rigging and seacock issues for decades. Proof of lanolins durability and dry-out resistance at moderate temperatures is a tub of 1920s lanolin grease we still use.

In our testing, Lanocote provided mediocre protection for steel, and fared better when used with aluminum and stainless. Weve used it on rigging screws for years with good results.

Bottom line: Recommended for stainless and aluminum, Lanocote is not our first choice for steel.

We first tested this product eight years ago for protecting electrical connections. Although it was not very effective in the challenging steel/steel pair in this test, it was a top performer on the aluminum/stainless pair.

A specialized product that riggers often tout, Tef-Gel is loaded with Teflon, which provides considerable lubrication under extreme pressure. It did an impressive job in eliminating seizing in both the aluminum/stainless pair and the steel/steel pair.

The only apparent downside to this product is that fasteners lubed with Tef-Gel often need just a little extra torque before they will stay put. For this reason, locknuts are a good idea in any high vibration settings, such as motors.

Bottom line: It is expensive, but it is also the Best Choice for aluminum, stainless, and carbon steel.

Primarily used as a pipe sealant, this is a top quality PTFE (Teflon) pipe dope. Any pipe fitter knows that Teflon pipe sealants are a boon to disassembly. While it works on piping, it didn’t impress us during our testing.

Bottom line: Save it for plumbing.

This metals-free concoction came highly recommended and met all our expectations for protecting fasteners in steel and aluminum. With a temperature rating that makes it practical for engine room applications, this is what we classify as essential goop, something that belongs on every auxiliary sailboat.

Loaded with nickle powder, the local outboard shop swears this is the remedy to frozen bolts on lower units. It failed to protect both test samples.

We found a new must-have for our tool box; Loctite LB 8023 Marine Grade Anti-Seize. It was impressive in wet conditions and the temperature rating suggests it should be pretty good in hot places as well. Tef-Gel is also a top performer on the stainless aluminum pair and remains our first choice for rigging based on long experience.

Five out of the six bolts broke in the steel-to-steel control group. The test screws were #8 machine screws, and 1/4-inch bolts.

After 18 months of exposure to brackish water, the aluminum mast was lightly corroded, especially the threads, where shiny alloy had been exposed. The steel plate, on the other hand, was heavily rusted. Even with careful pressure, five of the six control fasteners and several treated fasteners snapped as we tried to loosen them.

Although we took no special measures to loosen the bolts (impact wrenches or sprays), no screw heads stripped.

This was probably because we used a six-pointed wrench which is less likely to strip a bolt-head. For the aluminum screws, we used hex-head screws. Regular Phillips-head screws can easily strip.

1. The samples were immersed in brackish water during spring tides.
2. We used a six-sided wrench to ensure a good grip for breaking the bond.
3. Five of the six untreated fasteners snapped as we tried to remove them.
4. The lanyard was attached to a load cell that recorded torque. The stainless-steel/aluminum bonds were all relatively easy to break.

Some spray petroleum products are good for loosening bolts, some seal electrical connections, some protect against corrosion, some even claim to improve conductivity.

Over the years we’ve put these products through a variety of tests, with some surprising results. In one study, we found an anti-corrosion coating that actually seemed to promote corrosion.