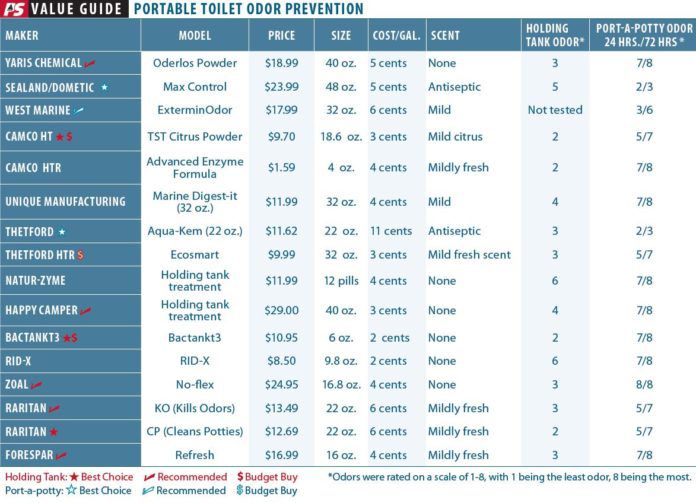 Then our tech editor Drew Frye downsized to a sportier boat with a portable head. Having lived with a portable toilet before, he knew that much of his hard-learned marine sanitation knowledge was not going to transfer to the port-a-potty. The geometry is different, there is no ventilation, and immediate reactions are more important than biology over weeks and months.

Another consideration is that many day sailors avoid using the boats head at all, often going for many months at a time without needing it. When it is used, once in a blue moon, is it worth the hassle of hauling it home to clean it out, knowing that most likely it will not be used for another 3 months? When Katrina hit New Orleans, the Red Cross handed out WAG (waste alleviation and gel) bags by the thousands to provide an emergency option. We’ve been living with these too, evaluating them as an option for small boats.

Our test included the main players, many of which, such as Camco, are more familiar among RV aficionados. Other contenders included products from marine toilet makers Thetford and Dometic (under the SeaLand brand), and multinational chemical corporation Yara, the makers of Odorlos. Some smaller niche-players like Unique Distributing, makers of Marine Digest-It, and Nature-Zyme rounded out the field.

Two familiar manufacturers in this round are Raritan, the New Jersey-based maker known for its marine toilet systems, and the Southern California-based Forespar, a longtime player in the marine market. Other contenders included Happy Camper, which as the name implies, is geared toward the camping market; Rid-X, a familiar septic tank product; and Zoal No-Flex, a chemical powder recommended by a Practical Sailor reader.

We set up five side-by-side head surrogates consisting of a bucket, seat, and lid and two portable toilets. Each was pre-filled with two inches of treatment diluted according to the instructions for portable toilets. If only holding tank instructions were provided, we dosed as if we were treating 20 gallons. Flushing consisted of splashing two cups of diluted treatment after use. Odor was measured objectively each day thereafter for four days. We also used the treatments onboard.

We also tested the WAG bag option, as a practical alternative for very small boats and winter (described below).

We couldn’t help but notice that the trend in effectiveness was completely different from holding tank treatments. In prior testing (February 2012 and December 2012) chemicals that encouraged aerobic cultures using enzymes, nutrients, and alternative oxygen sources (nitrate) were consistently most effective.

However, in our portable toilet trials, antiseptic chemicals gave the best odor control. Because all of these present at least some hazard to people or the environment, we were faced with a dilemma; how much weight do we give safety and environmental factors?

Formaldehyde is a probable carcinogen, if exposed in sufficient amounts, but significant exposure from a sealed portable toilet is unlikely. Quatrenary amines and specifically benzalkonium chloride (BAC) are toxic to marine life. Both are completely biodegradeable through water treatment. So long as the portable toilet wasted is treated ashore, the environmental impact is low.

Since only these chemicals did any good, we can only recommend you dispose of them properly and avoid contact. As always, read the safety data sheets for these products.

Only a few portable heads offer a vent option. These are larger units, such as the Thetford 550P and West Marine Cruiser, intended for permanent installation with connections to pump-out plumbing and hull vents.

In the absence of a vent, the problems are obvious. First, gasses generated from decomposition have to go somewhere, and that ends up being the cabin. Second, one of our favorite odor reduction methods in prior tests was to encourage the growth of aerobic bacteria by providing air; that can’t happen in a sealed MSD.

Would connecting a carbon vent filter help? We considered it but concluded it would make emptying more trouble and the best chemicals were quite effective. Additionally, there is a Coast Guard requirement that holding tanks be vented to the deck and never within the cabin due to the risk of methane generation. Ideally, a portable head is never vented and the valve is kept closed at all times.

Determining the dose. We started by using the recommend dose per gallon, and then immediately decided that using about the 40-gallon dose was far more effective. Start by filling the bottom with enough water to make a 2-inch layer, with about 2/3 of the chemical. Then fill the flush tank, adding the remaining chemical. This should be enough for several days of use or up to 2 weeks before dumping, though emptying more often is better.

Our testers first introduction to WAG bags was a spring ice climbing trip to Grand Teton. The hike-in to the base of the climb takes all day, the camping area is relatively high traffic in season, and waste doesn’t decompose efficiently above the treeline.

Park rangers there give you a heavy duty bag with a little absorbent in the bottom, and a warning to hang it away from the marmots, because they will make a mess of it and you have to pack it back out.

Our boating introduction came when we realized that lugging the porta-potty on and off the boat and across icy docks during the winter season was going to be a big pain. You can flush with antifreeze solutions, but overall, its a problem. We also realized that we practically never use the head in the winter, because our outings are shorter, but that we needed something for emergencies.

The bag vendors recommend using either one of their purpose built seats or a bucket with a seat, and say that they are incompatible with a portable toilet. While a bucket will give more capacity, simply laying the bag in the dry bowl of a portable toilet worked fine for a single-use.

We found the absorbent volume to be rather limited if much urine is introduced. We can only assume that the makers expect most users will make other arrangements. If that is not the case, be sure to use an extra scoop if you need to pee.

Don’t believe the neutralizes odors claims; it stinks bad until you seal the bag. That done, you can go back to sailing; its much better than sweating out the long ride back to the marina.

You can buy WAG bags as a complete kit (with hand wipes and toilet paper) or alone. We think buying the bags separately makes more sense for sailors, since they likely won’t need these extras.

Cleanwaste Toilet in a Bag

We tested the bag by itself. We figured that if you have a portable toilet, you don’t need the kit, which includes toilet paper and hand cleaner. Pretty basic, but it works. The bags are highly odor-resistant, very thick, and strong. Simply tie the very ample handles tightly when finished. The cost is $15 for 15 bags, a package of gel, and a scoop.

Intended to serve a family through a full day of use, they include an inner bag, an outer bag, and a zip-lock closure. These are larger and must be used with a five-gallon bucket. The cost $15 for 6 kits that include more gel.

As we described in our 2012 test, holding tank chemicals fall roughly into three categories: those that use disinfectants, those that add nutrients, and some newer formulas that rely on enzymes and bacteria to reduce odors naturally. Only the disinfectant approach really works in portable toilets. There simply isn’t enough time or the right environment for these enzymes to work.

This was clearly the most effective chemical for control of porta-potty odors in our test. In fact, after the 48-hour test was finished, we left the Max Control sample to simmer for a month in the summer heat, and it never smelled bad.

Though not very effective in holding tanks, it really works in portables. It readily stains many surfaces and skin if spilled, a good reminder to avoid contact. Formaldahyde-based.

Bottom Line: The Best Choice in our group. The only drawback is the formaldehyde

Testers slightly preferred the Max Control perfume, but perhaps that is individual preference. Control of odors for a few days or even longer was very similar. We’ve lived with it for weeks at a time and know it to be dependable, if not appealing. It is formaldehyde based.

This product contains benzalkonium chloride (BAC). While safe to humans, it has relatively high marine toxicity, so don’t use it in any system that has an overboard discharge. It is biodegradable in the public waste treatment process, however. This was the only non-formaldehyde formula that had any short-term effectiveness, moderating odors for about 2-3 days, after which its effectiveness plummeted.

These products had some effectiveness, but it was very limited.

The remaining products had little or no effect on the odors in our test. This is not surprising since most were designed for holding tank systems, not port-a-potties. This includes the products from Thetford, Camco, and others who did well in our holding tank test. These products, and their ratings in both tests, are listed in the accompanying Value Guide.

While establishing an aerobic biome is the goal in an installed holding tank, there simply isn’t that much time or any potential for ventilation in a portable toilet, so the winning approach is antiseptic action.

This difference resulted in a reversal of final rankings from our holding tank tests. We like formaldahyde-based Sealand Max Control for portable toilets. If we had to chose a non-formaldahyde product, West Marine Exterminodor is the only one that was mildly effective, though not for long.

For emergency use on a daysailor or sport boat, wed just use a wag bag and save a lot of hassle. Bags are not a long term solution for most people, but a great off-season solution for emergencies. Just stuff a box of the bags next to the portable toilet and you’re ready. 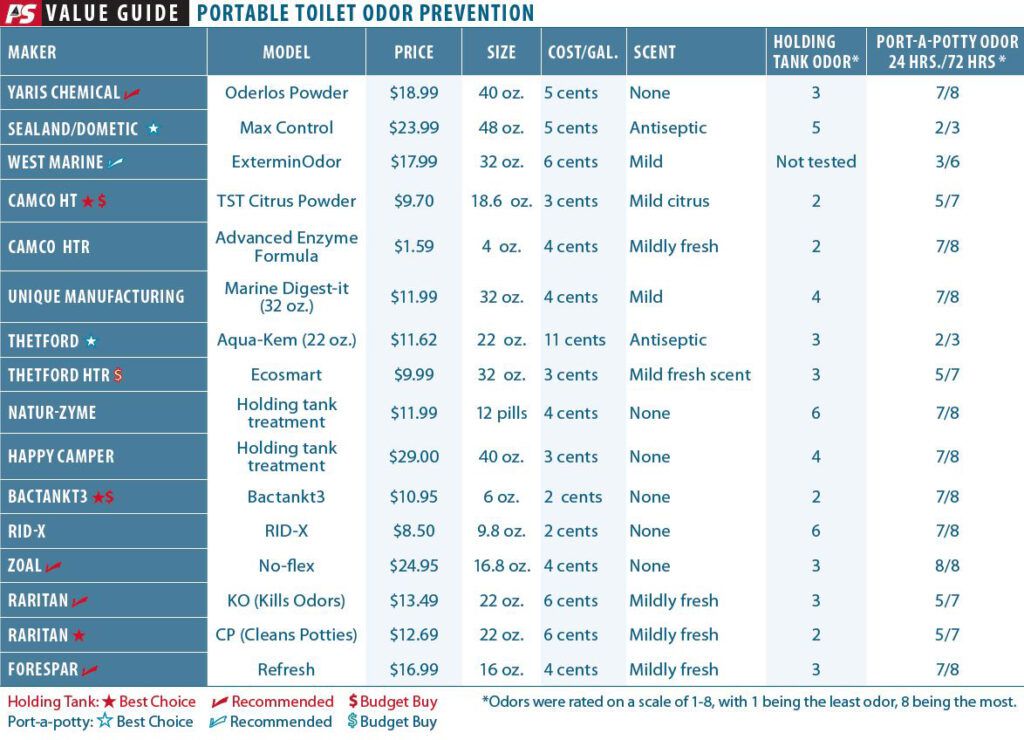