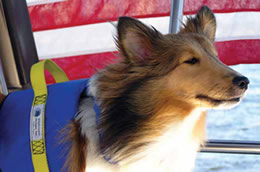 In regard to your request for recommended sailing dogs (PS blog, June 24, 2013): We sail with a Sheltie who puts up with a lot! Hes spent three winters cruising in the Bahamas with us and has the distinction of being the only one aboard who hasn’t gotten seasick.

Bailey is the perfect size (about 18 pounds) to tuck under your arm when getting on and off the boat. We purposely try and keep him from jumping on or off the boat himself. He also doesn’t mind using a potty mat, which makes cruising a whole lot easier. I wrote up some dog tips on my blog. Check them out: http://moondance38.wordpress.com/cruising-with-a-dog/.

Nice article on spotlights in the September issue. There is one consideration that was not directly addressed that Ive found can be important in poor visibility: beam narrowness.

For general-purpose illumination, a light with a nice corona and good spill is ideal, but when spotlighting a narrow beam in low visibility, spill is not desirable. Spill light reflects off of moisture in the air and smoke, and reflects from nearby surfaces to make it harder to see what is in the distance. This is why the Streamlight Fire Vulcan has such a narrow beam with little spill. Firemen need a beam that will cut through smoke without backscatter.

Your July 2013 issue arrived just in time as it contained a great review of portable VHFs. My current radio, a four-year-old Uniden MHS350, works great, but the battery needs replacing and Uniden does not make the battery anymore. It seems that obsolescence is defined by the battery casing, not the electronics. Which radios that you reviewed will have batteries for the expected life of the radio?

Its impossible for us to know which models will still have available batteries on the market for the life of the VHF, especially with battery technology changing so rapidly. But, a little research will give you insight into a companys history of post-production support for VHF batteries; just check out their available stock for older VHFs, or contact them to find out what their policy is. For example, it is Standard Horizons policy to support radio products repair services and accessories for seven years after the product is discontinued. Icom explained that often times, products are discontinued because their second-party parts have been discontinued.

Some handheld VHFs come with alkaline-battery trays, and investing in one of these would be a good backup plan, if youre concerned about a batterys obsolescence. Another option is to find a third-party business that can rebuild your VHFs original battery or that sells rebuilt batteries. NiCd Lady Co. (www.nicdlady.com) is one such business, and it rebuilds batteries for many handheld VHFs, including the Uniden MHS350.

Anybody ever wonder why their wind instruments don’t read the same as they did the weekend before? And did you ever wonder whether those spiky things (bird deterrents) really work? The accompanying photo is a 2- to 3-pound osprey, making masthead instruments his perch in Northport Harbor, Long Island, N.Y.

Thanks for sharing the photo. In our last test of bird deterrents (PS, April 2010), we actually found that those spiky things protected the smallest area of all the physical exclusion devices we tested, which included plastic and stainless spikes, the Fly Bye Bird Umbrellas, Gull Sweep, and Bird-B-Gone Bird Spider. Testers found bird droppings less than 10 inches from each of the spiked panels. And as you can see from the photo, the only area protected is where the spikes actually are placed, so using them to keep your cockpit or cabin free of bird pooh would mean placing numerous panels of spikes.

Successful bird deterrence is a complex business. One device may work well for seagulls and pelicans, but not so well for cormorants and osprey. Another might protect your deck, but not your lifelines or your rigging. Ultimately, the best approach is to use a mixture of devices.

Thanks for the kind mention of the EasyBailer (www.easybailer.com) in the July 2013 Mailport. To update you: I have ceased production of the EasyBailer solar-powered bilge-bailing systems due to a combination of increased demand and health issues. Production may resume next year. However, I am making building plans available for those who wish to make their own solar-powered bailer. For $25, I will email a detailed description of the building process, complete with photos and parts list. The EasyBailer website provides further details.

By the way, Sea Joule (www.seajoule.com), the product the EasyBailer was compared to in the July 2011 issue, is no longer in production.

From ValvTect: In regard to your August 2013 article on diesel additives: As always, I am impressed with the high level of technical expertise used in your projects. Also, I am pleased that ValvTects BioGuard ULS Microbiocide was given a PS Recommended rating. However, BioGuard ULS is a biocide intended to prevent or kill micro-organisms that grow in fuel. It will also prevent corrosion caused by micro-organisms, but BioGuard ULS does not contain a corrosion inhibitor and is not intended to prevent corrosion caused by water.

For that purpose, ValvTect offers other products such as Diesel Guard Heavy Duty/Marine Diesel Additive and our new BioGuard Plus 6, which is designed to solve all diesel fuel-related problems, including corrosion and micro-organism growth. All ValvTect diesel products contain a corrosion inhibitor except BioGuard ULS and BioGuard WS (now obsolete) as they are single-function biocides.

Thanks for your clarification. The August article was not an attempt to criticize any biocide we tested. The focus of the test was to determine what, if any, protection an additive would offer if diesel was infected and had become sour, and perhaps also saltwater contaminated, before it was purchased. This seems to be common place, and a biocide alone would not protect the system. We wondered whether some of the biocides would have corrosion-inhibiting activity, and the test aimed to answer that.

The BioGuard Plus 6 was not on the market when we began testing, but we plan to add it to the test field. Stay tuned for the test update to see how it compares to the other products.

From Biobor: We always appreciate PSs continued inclusion of our products in additive tests. I did, however, want to respond to a few aspects of the recent diesel additives article in the August 2013 issue.

Biobor JF is not designed to prevent saltwater-induced corrosion. As you know and mentioned in the article, Biobor JF is specifically designed to kill and prevent hydrocarbon-utilizing micro-organisms and the MIC corrosion that follows, as well as add lubricity. Biobor JF is the only biocide available with specific recommendations and approvals by OEM (original equipment manufacturer) diesel engine manufacturers, and, the active ingredients are much more safe for continued use in a complete fuel system.

The main purpose for this letter is to make PS aware of our product Biobor MD. Biobor MD is an all-inclusive marine diesel conditioner and efficiency enhancer; essentially covering all of the necessary protection needed in a diesel engine aside from biocide. One of the key components of Biobor MD is an effective corrosion inhibitor similar to the one used in Biobor EB. This is designed to specifically combat the water-induced corrosion issues displayed in your testing. Not only are we confident that our product would perform well in your testing, but Biobor MD would be much more competitive against the other test products regarding the specific attributes tested. Biobor MD has been on the market for about five years now and is readily available.

On a different note, I would also like to suggest a topic that is very prevalent in the diesel industry and may provide for an interesting future additive test. Lubricity in ULSD has become an area of concern for diesel-engine operators and is an extremely important aspect of the fuel we are now required to run in diesel engines. OEM diesel engine manufacturers are very open about the potential damage their engines face due to the lack of lubricity in diesel fuel.

The issue is that refineries are only required to meet ASTM specifications of .520mm lubricity rating (ASTM-HFRR) while the EMA and ISO specification is .450mm. Thus, diesel fuel purchased by boaters may contain significantly less lubrication properties than recommended by the engine manufacturer. However, the proper additive can effectively cover this lack of fuel lubrication and protect the injectors and fuel pumps that are increasingly seeing detrimental effects.

One additional benefit to both of our diesel products, Biobor JF and Biobor MD, is that they provide this necessary additional lubrication. Testing for fuel lubricity and the benefit an additive provides can be easily and cost effectively determined by ASTM-6079.

Along with the ValvTect BioGuard

Plus 6, well be adding the Biobor MD to our field for a test update. Well also look into developing a reliable test for verifying lubricity claims.

One lumen per square foot, or one foot-candle, is approximately 10 lux. The lux value was misstated in the September 2013 article Lux, Lumens, and LEDs.