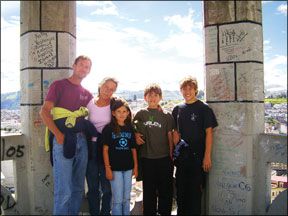 In the last decade, tool manufacturers have drastically improved their standard products. Today, all of the major manufacturers offer professional-grade power tools at reasonable prices. My personal choices are based on a wealth of experience with literally hundreds of tools owned by myself, my employees, and subcontractors. It boils down to reliable and versatile tools. The must-haves include: Hitachi angle grinder, Porter Cable Orbital Sander, Fein Multi-master, Dremel, Makita 14.4-volt drill driver, Makita 9.6-volt angle drill, and an 18-volt Milwaukee reciprocating saw.

As a professional carpenter and builder for the last 30 years or so, I have an enviable fleet of tools at my disposal, including many of the cordless ones that have come of age these last few decades. A lot of these tools have spent many hours of quality time with me at the boatyard, and when I finally set off on my circumnavigation a few years ago, some of them came along. Fifteen-thousand miles later, I know which ones Ill be keeping on board.

The one power tool that no home, boat, or spaceship should be without is a cordless electric drill. I carry two, with the workhorse being a Makita drill/driver [Makita No. 6339DWDE]. This model has everything I need in a drill. Its compact, comfortable, and powerful enough for any routine on-board jobs, including drilling stainless chainplates or running a big hole saw. The ratcheting half-inch keyless chuck is large enough to accept any bit youd want to use, and is well designed for easy one-handed operation. With an alloy gearbox and positive battery lock-in, it avoids two of the most common failure modes for these tools. It lives in its own plastic case with plenty of room for a charger, extra battery, a drill index, and assorted other tools. Mine has been working hard for five years, with the occasional new battery, and shows every sign of lasting a good while longer.

My other drill is a Makita 9.6-volt right angle model Makita Until you’ve had one of these compact variable speed drills on board, you can’t believe how useful it is. It even rides safely in the pocket of a bosuns chair. This is an older style tool, but its still available, along with replacement batteries. Its 9.6 volts is plenty for the routine drilling and screwing that this tool is so good for, and the low voltage batteries will take three to four times as many charging cycles as their higher voltage counterparts. Mine has been going strong for even longer than its big brother.

The other tool that I wouldn’t want to leave home without is my 18-volt Milwaukee reciprocating saw [Milwaukee #651420]. This saw has the three features I feel are indispensable: a keyless blade chuck, an adjustable handle, and a switch from orbital to straight-cutting action. Its such a useful tool that I have two now, one for the boat and one on the truck. As with any saw, more power is better than less. The 18-volt batteries don’t last as long as Id like, but older Milwaukee tools can be retrofitted with the new generation of lithium-ion batteries. Im hoping to see significant improvement when I upgrade.

My first Milwaukee cordless tools came as a set, including a circular saw, hammer drill, and work light, in addition to the reciprocating saw. The hammer drill never earned its place on board; even with the additional voltage, it isn’t noticeably stronger than the Makita, and its larger and not as ergonomic to use. Also, the gearbox on mine began to fail relatively early; this is a common problem with hammer drills in general. The circular saw is a handy but not very necessary tool to have on board. The 18-volt model is a bit underpowered and uses a lot of battery for a little work. Hopefully, the new lithium-ion batteries will be an improvement. The Milwaukee work light is a handy little devil and gets lots of use, but I have a friend who carries DeWalt cordless tools, and his work lights have long, flexible necks&emdash;very cool. As a professional carpenter, thats about the only positive thing I can say about the DeWalt cordless fleet.

John and Kerri Spier and their three children Sally, Sam and Dave began circumnavigating in legs in 2005, aboard Aldora, an Outremer 45 (left in Bora Bora, French Polynesia), a french-built performance cruising Catamaran (their third multihull). The family cruises six-eight months a year. When not sailing, the Spiers can be found on block island, R.I., where they have a home and business.