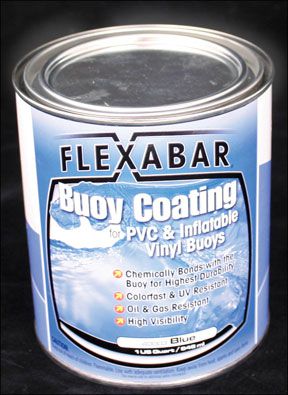 Inflatable boats have a long list of bonuses, but eternal life is not one of them. The harsh effects of UV exposure, frequent use, and operating in polluted waters all take their toll on inflatable boats, whether they are PVC or Hypalon. Proper maintenance and frequent washing with a good dinghy cleaner help keep grime, oxidation, and organic fouling (barnacles, slime, etc.) to a minimum, but eventually, a new paint job may be needed.

Topside paints for inflatable boats, in general, have a poor reputation for durability. Practical Sailor checked out a selection of coatings for inflatable fabrics to see which one would best stand up to the tests of time on the water-and under the sun. This review of their application, abrasion resistance, and adhesion is the first report in our long-term test of these coatings. Look for follow-up reports on their durability and UV resistance in future issues.

All of these products are designed to bond to inflatable fabrics. To be effective, they must be flexible enough to expand and contract without cracking, as a boat is inflated and deflated, as the tubes heat up and cool down, and even as the dinghy is folded for storage.

For this report, testers looked at each products ease of application, abrasion resistance, and adhesion characteristics. To see how we tested the inflatable boat paints, see “Six Coatings Face Bench Tests” on page 15.

From MDR-Amazon-a New Jersey-based maker of marine maintenance products-we tested the dark gray No. 783 paint. The coating is a water-based vinyl paint designed to be a flexible coating for Hypalon, PVC, and vinyl; its available in several colors. The MDR product is non-toxic, odor-free, and environmentally friendly. Because its water-based, cleanup and application are very easy. No solvents are needed, and it does not require a primer. We did use the MDR Inflatable Dinghy Cleaner prior to painting the patch, and it did a good job of cleaning up the old Hypalon.

The MDR paint was easy to apply and quick drying. It left a clean semi-gloss finish on both Hypalon and PVC. After 30 days, it was smooth and dry.

Its slippery nature earned a Very Good for abrasion resistance on the PVC panel, but only a Fair on the Hypalon. The paint passed the adhesion test with flying colors on both panels.

Tuff Coat, manufactured by Synergy Research Corp., is sold as a two-part system comprising a quart of basecoat and a quart of topcoat.

The basecoat is a synthetic rubber compound designed to bond directly to Hypalon, but it can be used on PVC with a little extra sanding and cleaning with acetone. In testing, the thick basecoat bonded quickly and smoothly to the Hypalon. Getting it to bond to the PVC entailed a little extra prep work, and the paint bubbled up a little and remained tacky for almost 24 hours.

The topcoat is a water-based acrylic vinyl designed to bond to the basecoat. It can be thinned and cleaned up with water. In our test, the topcoat dried quickly and smooth on the Hypalon, but it was still tacky on the PVC after 48 hours, eventually pulling together after 72 hours in the Florida humidity. The dry times for both products were in line with the makers instructions, which state that curing could take up to a week when applied to PVC.

The Tuff Coat we tested was a no-gloss paint, which SRC says typically is best for older, distressed boats, but the company offers the product in a range of glosses and colors. After 30 days, the flat paint we applied showed some brush marks.

On Hypalon, the Tuff Coat rated Good in abrasion resistance, but the scuffs showed more on the PVC application. It passed the adhesion test on both.

Bottom line: The Tuff Coat was a middle-of-the-pack performer.

Inland Marine, a Florida-based maker of inflatable boat repair and restoration products, markets multiple products for worn-out inflatable boats. To revitalize oxidized, aged fabrics, Inland offers Liquid Rubber, which can be applied to the whole boat, to spots where there is extreme wear, or areas where some fabric may be exposed. A quart should cover about 50 square feet.

Sold separately is the Inland Topside Paint, a water-based coating that can be applied over the Liquid Rubber or directly onto Hypalon or PVC that is in fair condition. A quart should cover the topside of a 9-foot dinghy.

The basecoat formula is pure EPAM liquid rubber, and it has the consistency of cool honey. It comes with a small bottle of catalyst, and when mixed, the solution has about a six-hour shelf life, depending on temperature and humidity. The instructions are emphatic that the surface should be roughed up well. They suggest cleaning Hypalon with acetone and cleaning PVC with MEK. Thinning and clean up is best with xylene.

We applied the Liquid Rubber plus Topside Paint to a section of the test patches and Topside Paint alone to the rest of the patches so that we could see whether using both parts added longevity to the coating. According to Inland, few customers apply both products.

Following our initial adhesion tests, it was obvious that the products had not been allowed to cure thoroughly. Applying coats over un-cured paint leads to adhesion problems, according to Inland, and that is what happened on the test panels.

The instructions on the cans had not specified a cure time in a high-humidity climate. However, a fact sheet supplied with the Liquid Rubber does instruct users that dry times and cure times would be longer in humid climates, and that full curing could take a week. They made no mention of whether the Liquid Rubber should be fully cured before overcoating it with the Topside Paint nor did they give a suggested re-coat timeframe. According to Inland, the directions will be amended with more specific instruction.

This application snafu highlights the need to carefully read all literature included with a product and to apply products to a test patch before coating an entire boat so that an accurate cure time for the conditions can be established. This is particularly important when using multiple or two-step products.

To ensure a fair evaluation, we refrained from rating the botched Inland test panels for this report, and a new set of PVC and Hypalon panels will be coated with the Inland products for a re-test. At presstime, the products were being applied to new panels per a followup conversation with Inland Marine Managing Partner Dan OConnell regarding dry and cure times. Look for our ratings and report on the re-test in an upcoming issue.

Bottom line: Testers are withholding any comment on the Inland products pending the results of the re-test.

Polymarine, a British company with an extensive line of accessories, components, and products for inflatable boats, is distributed through Inflatable Boats USA in Bradenton, Fla. The company offers two different paints for inflatable boat restoration. Its Flexithane is specifically designed for Hypalon, and Superflex is for PVC fabrics.

The Flexithane paint was a very thin liquid that dried in 30 minutes on the Hypalon. The Superflex also dried within 30 minutes. Both are toxic paints, so safety precautions, including wearing a mask, should be taken.

After 30 days, the Hypalon beaded water the best, but it did show watermarks after drying. The PVC also beaded up, but it looked better after drying.

Bottom line: These both performed very well in all of the bench tests and were easy to apply. The only thing holding the Flexithane back is its price-which is about double the most expensive of the other test products. The Superflex is priced at the high end of the spectrum as well, but its cost is somewhat more palatable given its top performance.

Flexabar Buoy Coating maker Flexdel manufactures many water-based antifouling bottom paints. Its Buoy Coating is sold as a restorative paint for flexible and pump-up PVC and vinyl buoys and fenders. It also works well for inflatable boats, but it is not marketed for such applications.

The Buoy Coating currently comes in multiple colors; we tested the blue (No. 40103). It bonds to PVC with a high degree of UV resistance, durability, and high visibility, according to the maker, but the company makes no claim that it will adhere to Hypalon.

Testers cleaned the Hypalon and the PVC patches with Buoy Coating thinner and applied the paint to both, although its specifically designed for PVC and vinyl. The paint has an extremely strong odor but dries very quickly, leaving a bright, glossy finish. After 30 days, it cured to a lumpy finish on the Hypalon, but remained smooth and glossy on the PVC.

The Buoy Paint showed very good abrasion resistance and adhesion on the PVC, and surprisingly, it showed excellent resistance on the Hypalon. However, a small piece of the coating came off during the adhesion test on the Hypalon patch, which was not a shock given that its not formulated to adhere to that material.

Bottom line: The least expensive of the lot at $20 per quart, the Flexabar Buoy Coating gets the PS Budget Buy for PVC application.

There is a steadfast rule in marine coatings application that its imperative to test the products on a small section prior to carrying out the full project. The small bit of added work and headache pales in comparison to the migraine of stripping fresh paint off the entire dinghy should it not cure or bond well.

In the case of topside paints for inflatable boats, we suggest doing a test patch with all of the steps involved, then conducting an adhesion test similar to ours once the paint has cured. Remember that weather is a big player in determining dry times and cure times.

While our final ratings could change once the results are in from the Inland Marine re-test, weve tapped the top picks among the other test products. The PS Best Choice for Hypalon is the Polymarine Flexithane. Its pricey, but it was a top performer in this round of tests. Well see how durable it is over the long haul. If your dinghy budget doesn’t cover a Flexithane application, we recommend the Budget Buy MDR-Amazon. The Best Choice for PVC is Polymarines other coating, Superflex. It also ranks at the high end of the price spectrum. For budget-minded sailors, we suggest the PVC Budget Buy, Flexabars Buoy Coating.

tested products marketed as coatings to restore and revitalize the topsides of inflatable boats that have seen too many sunsets. Tuff Coat was the only true two-step system tested. We also evaluated topside paints from Marine Development Research (MDR)-Amazon, Polymarine, and Flexdel. From Inland Marine, we tested two products: Liquid Rubber, a compound used to spot-repair aged fabric or to “re-skin” an entire boat, and Topside Paint, which can be applied alone or on top of the Liquid Rubber.