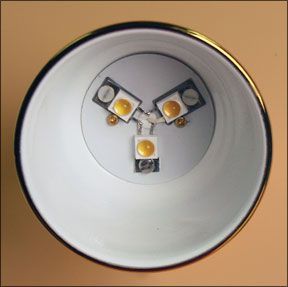 Sailors have long looked for ways to reduce energy consumption. As we replace incandescent bulbs in our homes with compact fluorescent bulbs, LED technology offers ways to cut energy for certain on-board applications.

For general cabin illumination, fluorescent lights are still regarded as the most efficient (as measured in lumens per watt), but the new generation of LEDs have come a long way since the last Practical Sailor test.

featured an extensive review of all cabin lights in September 2004, and at that time, testers found that “… LED lights are still a bit too cool-colored and directional to be used where a warm mood is a must … but a coolish medium-widespread LED is OK for reading in the bunk.”

In the May 2006 issue of Practical Sailor, we reviewed Scad Technologies Sensibulb (sold through Sailors Solutions), a representative of a new generation of LEDs that more closely matches the performance of incandescent bulbs like xenon and halogen and approach the efficiency of fluorescent. Developments since our last test include brighter LEDs, more efficient drivers to transfer the energy to the LED, improved heat sinks, internal voltage regulators, and better reflectors and lenses to focus the light.Practical Sailor anticipates that the technology will continue to improve and lower the cost of all LED lighting.

The range of LED interior lights is staggering, and the technology is evolving quickly. To contain this project, Practical Sailor narrowed its search to bulbs that could replace a 10- or 20-watt xenon bulb in a bulkhead-mount reading light, a common fixture on sailboats. Sixteen lights from seven manufacturers rounded out the field: an integral bulb and fixture from Alpenglow, two LED units from Sailors Solutions, three from Cruising Solutions, three from Doctor LED, four from Imtra, and two from Daniel R. Smith and Associates (DRSA, distributor for Mast Products).

Most of the makers in our test feature similar LEDs to fit other fixtures, ranging from dome lights, to nav station lights, to cabintop “puck” lights. The top-rated manufacturers in this comparison should also be a good source for lights to fit different fixtures. New LED lights are appearing each month, so check for the latest versions.

The baseline used for the test was the bright, hot, 12-volt DC, 20-watt xenon bulb that came in a West Marine Xenon Swivel Reading Light (part no. 2660926). Testers noted that the G-4 style socket used in this fixture is a tight fit for the thicker pins found on some MR-11 and MR-16 bell-type LED lights. These larger pins expand the sockets, so youll have to carefully squeeze the sockets back down to size if you want to revert to a G-4 xenon bulb.

The standard xenon bulb provided ample light for reading, drew nearly 2 amps, and bathed the room in an amber glow. After recording data ranging from luminosity to power consumption and making observations regarding color temperature (the hue of the light as measured in degrees Kelvin), testers compared the LEDs in a series of side-by-side tests. (See “How We Tested.”)

Alpenglow does not sell a separate bulb, so Practical Sailor tested its new reading light, with three LEDs built into the back of the white reflector. The fixture produced a bright uniform light that was excellent for reading our chart. Alpenglow drives its 3-watt LEDs at about 1.3 watts, and the brass housing works as a heat sink. According to Alpenglow, this lower temperature helps improve efficiency and longevity.

Since the LEDs mount in the back of the lamps bell housing, the light produced gets the full benefit of the internal white reflector. The light then appears brighter and is distributed in a 60-degree beam. Practical Sailor testers rated the Alpenglow as the second brightest for reading, and it was the favorite overall. (Alpenglow says it recently modified the light so that it is slightly brighter and delivers a more even, warmer light.)

Bottom line: Only about 10 percent more expensive than the 20-watt halogen bulb and fixture it replaces, the Alpenglow is an excellent choice for those who need a fixture and a bulb.

Cruising Solutions sent Practical Sailor three warm LED bulbs. The MR-11 6P 1.8-watt replacement unit comes with six LEDs inside a typical one-inch round reflector with a G-4 socket. It is a small, economical package, good for a bunk, but not nearly as bright as some others. The brighter MR-16 9P 2.5-watt unit, with nine LEDs, rated good for general illumination, and although not as bright as the top-tier lights, it has a color temperature close to that of incandescent light. Both units have a beam angle of 120 degrees, which made for pleasant general lighting. The newer 4-LED (HP G4) is smaller, less expensive, and takes less energy, but it is not any brighter. (Cruising Solutions also caries a line of brighter, “cool” LEDs.)

Bottom line: The 9P LED produces a warm, wide beam that would make a good multi-purpose bunk light or light for a small cabin.

Doctor LED offers a large selection of quality LED lights. The company sent three replacement modules that are built into round reflectors with the pins in the back. Each has one LED with a glass lens over it for protection. The small MR-11, 1-watt unit (part no. 8001238) gives a fairly bright, warm light with a definite spotlight effect. It is compact, draws only 0.11 amps, and will serve well as a narrow-beam reading light. The MR-16, 1-watt (part no. 8001290) is slightly larger, produces a warm, bright light over a wider area, but still has a well-defined spot. The MR-16, 3-watt light (part no. 8001399) is even brighter, but it protruded from the fixture and drew more amps.

Bottom line: The two smaller lights are a good choice for narrow-beam lighting that wont bother your bunk mate or spill over into other areas of the cabin.

Two were the familiar cluster-style 21-LED (part no. GU4-21) that drew very little power, but lagged in brightness. (Imtra says the 60-degree beam angle in this style light would be better for reading.) Like the Sensibulb, they are dimmable (down to 50 or 20 percent, depending on the type of dimmer used).

The two others, ILGU5.3 modules (one with a “cooler” color temperature), however, were among the brightest tested. They come in heavy-duty MR-16 size housings, sporting substantial heat sinks and a magnifying glass lens.

The Imtra cool LED was the brightest of all the test samples, while the warm LED was a closer color match to a 20-watt xenon reading lamp. The Imtra LED housings are completely sealed and designed to withstand high heat and humidity and constant vibration.

Bottom line: If brightness is a priority and you can spare the milliamps, either one of the ILGU5.3 LEDs is an excellent choice.

Daniel R. Smith & Associates Inc. submitted two 7-LED replacement bulbs (manufactured by Mast Products), that are in the MR-11 size housing with a clear lens. One is called “warm white” and the other “soft white.” The soft white has a cooler, blue-green color temperature. These lights consumed the least amount of power, but had a little RFI buzz, and rated only Fair for reading.

Bottom line: These bulbs seem expensive by comparison, but would work fine in a cozy bunk where a bright light is overkill.

Bottom line: These are bright reading lights, but relatively cool in temperature, and narrow in beam angle compared to others.

Since Practical Sailor last tested the Sensibulb, Scad Technologies has released two new versions: a warm “softlight” and a cool “daylight.” Both come with a versatile G-4 two-prong (skinny wire) connector that can be clipped at the side of the heat sink for mounting in a dome fixture, or at the back of the heat sink for mounting in reading lamps like our test fixture. The clip makes the bulb more adaptable, but it is not the most secure.

The dimmable Sensibulbs include thermal feedback circuitry to keep them operating at a constant temperature. Though they were not the brightest for reading, both units produced the widest beam angle, one that more closely emulated the cabin lighting of the xenon bulb. Scad also offers a Sensibulb LED unit installed in an ABI brass fixture with dimmer circuitry and built-in rotary switch.

Bottom line: This is a versatile, efficient bulb with a warm spread of light and an imperfect mounting clip. The cooler daylight version is the better reading light, and its color temperature is still pleasant.

Readers should keep in mind that this comparison encompasses only a small cross-section of the offerings from these and other makers, and there may be better bulbs for specific needs. Where you mount your light and the type of fixtures you have will dictate which bulb is best for your purposes. A low-power, and/or narrow beam-angle light might be fine for a berth reading light, but not much help in the saloon. The brightest lights might not appeal to those who want to shave milliamps or foster romance.

At the end of testing, it was not surprising that some of the higher-amp units climbed to the top. The Imtra ILGU5.3 MR-16 “cool” bulb was judged the brightest of the group, earning it the Best Choice for reading. Imtras warm version of the same bulb earned a Recommended rating, as it more closely matched the color temperature of a 20-watt halogen in this fixture.

Recommended for those who want a bulb with a wider beam angle, or one that is dimmable, the Sensibulb Daylight is clearly the most versatile module. It combines efficiency with a wide, even spread of light that you can read by. The Cruising Solutions 9-LED unit is a Budget Buy in the wide-beam angle category.

Finally, for those who want a bulb, fixture, and mount, the Alpenglow TR LED is a clear winner. Combining a 60-degree beam angle with ample illumination, this unit is as close to a 20-watt xenon version as weve been able to find.

LEDs arent cheap. Cost effectiveness will in some part depend on longevity (claimed to be as much 30,000 to 50,000 hours). All of the recommended test bulbs will undergo long-term testing, and any findings will be reported in a future issue of Practical Sailor.