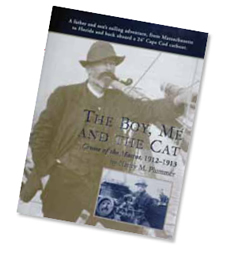 Ninety-nine years ago last month, Henry M. Plummer, his adult son, Henry Jr., and a cat named Scotty set out from Massachusetts, bound for South Florida in a 24-foot catboat. Mascots waterline was 23 feet; the beam was 10 feet; and draft was 3 feet, 6 inches. The Marshall 22 reviewed in this months issue offers a pretty good example of Mascots traits.

Mascot was engineless. In calms, father and son pushed it with a 15-foot dory equipped with a 3-horsepower engine. Accommodations were rough. They shot or caught most of their meat.

The voyage began inauspiciously, with Henry Sr. injuring his leg in an accident while helping warp a ship to the dock. His log entry for that day, Sept. 15, 1912: Made a mental note never to try to help anyone again. The log entries carried on for eight months and eight days, to Biscayne Bay, Fla., and back to the Pascamset River, Mass., and were eventually compiled into a small book, The Boy, Me and the Cat. Republished in 2001, along with some black-and-white images taken during the voyage, it stands as one of Americas classic small-boat cruising yarns.

Henrys comment about helping others is a joke, of course. Many of the crews adventures involve helping out a fishermen or fellow sailors, or relying on someone else for help. Yet most of the voyage is characterized by the spirit of independence and self-sufficiency in which it began. What I find intriguing is the curmudgeonly tone of Henry Sr.s account. Whether it is the lull between two economic depressions, the shadow of the coming world war, or the encroaching spectre of old age, the cause of Henrys mood is never explained. Whatever the case, it provides a perfect background for his wry sense of humor. There is a Mark Twain chuckle on every page.

Henrys keen observations of human nature, mostly revealed through his high regard for his son and his frank, unflattering look at himself, stand in sharp contrast to 21st century cruising accounts-the wish you were here blogs and the buoyant trips of a lifetime. Reading these modern cruising stories, you would think that setting out for the Caribbean is as easy as swinging by the supermarket to pick up some milk and eggs. Henry Sr. would have something to say about that.

Although he often applauds young Henry for a job well done, Henry Sr.

refuses to boast. He revels instead in the muddling, the mistakes, and the harsh and beautiful world around them. When the crew of Mascot does succeed, it is most often attributed to sweat of the brow or plain dumb luck. More than anything, The Boy, Me, and the Cat is a story about sailing the Eastern seaboard: the tides, the wind, the sail changes, the groundings, the bar crossings, the repairs, the groundings, the mending of sails, the darning of socks, the groundings-yes, plenty of groundings, even with 3 foot, 6 inches of draft. Not a lot of sightseeing, here.

If you are bound down the Intracoastal Waterway this fall, track down a copy of the book. Few cruising tales so well embody the boat in which the adventure is carried out. Like the American catboat-a boat as lovely from afar as it is ungainly up close-the story sticks to the point, never once pretending to be something its not. And if, after reading it, you still like the idea of adventuring in a shoal-draft boat nearly half as wide as it is long, you could do worse than follow in Mascots wake.