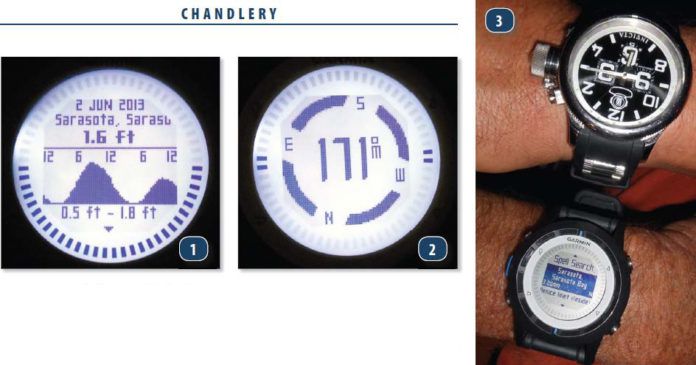 There is no shortage of sailing watches on the market, and weve reviewed our fair share (PS, November 2011 issue). So when Garmin released its first mariner-specific GPS watch, we were interested to see what features, if any, set it apart from the crowd. After nearly six months of testing Garmins Quatix watch on and off the water, we can report that it is not your ordinary sailing watch. It bundles multiple miniature marine electronics into one small, impressive, hands-free package that is made to withstand life at sea.

Testers-who have worn the Quatix daily, using it for sailing, racing, and even canyon hiking-noted that the watch shares many of the characteristics of its Garmin predecessors, the Forerunner and the newer Fenix hiking watch. The waterproof (to 150 feet) Quatix features a very sensitive GPS that it uses to set the time and get position data. (A testimony to its sensitivity: The Quatix GPS maintained a solid fix for the duration of a flight from Chicago to Tampa, Fla., and it even changed the time zone from central to eastern as we passed over it.) Like its siblings, the Quatix also has a tilt-compensated, three-axis compass; altimeter/barometer; temperature sensor; and wireless communications (via Bluetooth, radio frequency, and Garmins ANT, a form of RF). When networked with Garmin devices, it can even serve as a man-overboard alarm, remote control an autopilot, and stream NMEA (National Marine Electronics Association) data such as wind speed/direction, water depth, etc.

For sailors, navigating with the Quatix is very straightforward. It stores up to 1,000 waypoints in GPX format. The waypoints can be manually entered or uploaded to the watch via Bluetooth through BlueChart Mobile or via USB using Garmins Home Port or Basecamp computer software, which are available in PC and Mac versions. Because of the small size of the monochrome display, testers found it easier to use BlueChart Mobile or one of the computer mapping software programs when entering a batch of waypoints. There are 10,000 track points available. Track interval is adjustable by either time or distance. The interval also can be managed in the auto mode, which creates fewer points at slow speed and more points at faster speeds. There is also a back-track mode, which is helpful in heavy fog or in poorly marked channels. Users can create up to 50 routes on the watch, which has 20 MB of built-in memory.

The Quatixs sailing-specific features include advanced racing tools and a race-start timer that utilizes a virtual start line and the ability to synchronize the watch to the official race countdown timer. It can calculate distance to the line, desired speed, and burn time available, to increase the boats chances of crossing the line at the best speed at the exact race start time. The Quatixs tack-assist function makes it easy to know whether youre getting headed or lifted, based the optimal tack angle, and when its the best time to tack. Also, local tide data is generated and displayed graphically, and the stopwatch uses chimes and vibrations to note countdown timing intervals.

The watchs 1.2-inch base map display is small, but you can set up very readable data pages that will give you all of the information you need. With about 80 different data fields possible, there is so much info available that you have to organize its presentation into profiles. Custom profiles for an activity are quick and easy to set up. Make and name a new one, then add the data pages you want to see for that profile; data pages can have up to three fields. For example, a racing profile might include the course over ground, velocity made good, and distance to the next waypoint data fields. Data pages for profiles can be set up for both the tracking or navigation modes.

In testing, we used the watch exclusively during a local regatta to run a course with seven waypoints. Data pages were configured to show bearing and range to the next point, speed over ground, course over ground, velocity made good, and estimated time of arrival. As each waypoint was passed, the watch immediately switched to the next waypoint in the race-course route.

As a standalone device, the Quatix is a very impressive technical accoutrement to any wrist, but if you have Garmin onboard electronics, you can do a lot more. The Quatix can communicate with any GHP-series autopilot using its built-in wireless capabilities. You can engage and disengage the autopilot using the watch-and you can even steer with it.

With the addition of a Garmin GNT10 NMEA 2000 transceiver ($200), you can stream your Garmin systems NMEA 2000 data directly to the Quatix watch, making even more useful data available for viewing and for use with the racing and GPS tools.

Using the GNT10 also enables the watch to operate as a man-overboard (MOB) alarm. If the wireless communication between the watch and the transceiver stops, an MOB alarm is activated on the connected Garmin chartplotter. We found that on average, testers had to be about 60 feet away from the test boat before the MOB alert was activated.

Streaming the NMEA 2000 data shuts down the watchs internal GPS, and the Quatix uses the streaming position data instead. This, however, does not improve overall battery life. The Quatixs rechargeable lithium-ion battery has approximately a 16-hour life with the GPS active and about 25 hours when the watch is wirelessly connected to other system devices via the GNT10. If the GPS is off, and only the Quatixs basic watch functions are being used, battery life can be as long as six weeks. Recharge times-from no power to full power-varied from an hour to an hour and half in our tests. For those off the power grid, Garmin offers a lithium battery pack and a folding solar panel. The kit also includes a variety of AC adapters for international power systems.

With the Quatix connected to a computer, you can quickly update its software or access its directory and delete unwanted files. Updates require installing Garmin USB drivers on your computer; the drivers can be downloaded from the companys website. In tests, updates were easy and fast to carry out.

The back of the watch face has four contact points that mate with contacts on the USB/charger cables attachment clip. Testers were concerned that over time, these metal contacts might become corroded or gunked up with salt or sand. After nearly six months of round-the-clock wear, testers noted no problems with the contact points on the watch or any connection issues between them and the USB cord. Garmin recommends cleaning the area with a mild soap and a soft toothbrush should it become packed with sand or the like.

The watch, which weighs 2.9 ounces and comes with a rubbery urethane strap, is comfortable enough to wear for everyday use. Its similar in size to most sailing watches-and smaller than most dive watches like the Russian Invicta-but those with petite wrists may find it cumbersome. The intuitive function buttons are large and can be used easily while wearing gloves.

Bottom line Testers were thoroughly impressed with the watchs capabilities and unique bundling of functions, a laundry list of features weve never before seen in one watch. In conjunction with Garmins computer mapping software, the watch is most certainly a useful secondary navigation tool, giving you handsfree access to important data and chartplotter functions from anywhere on the boat.

Racing sailors will particularly appreciate the handy tools, which arent typically found in handheld devices. It does take an investment of a couple of hours to get a handle on setting it up, but the brief instructions are adequate.

Although we have not yet had an opportunity to test all of the watchs features-there are many-we have been overall impressed with its performance and capabilities. The $450 price tag is a bit steep for those who just want to know what time it is or to have a stop watch for race starts, but its a reasonable price for those seeking more than a standard sailing watch. (We would like to see a better warranty than the one year that Garmin offers.) We highly recommend the Garmin Quatix for those who will take advantage of all the available bells and whistles.