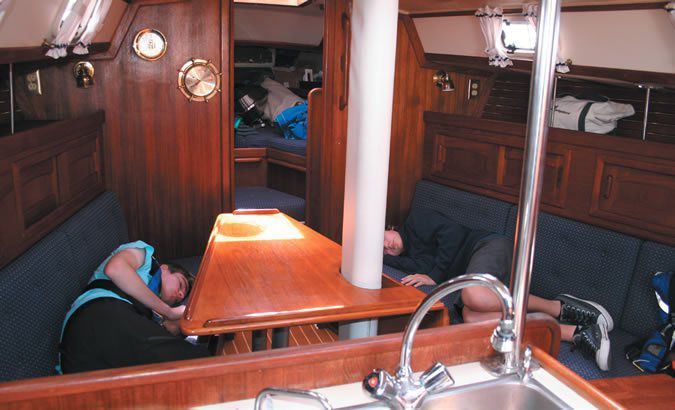 Regarding the article on recycling gear for cruising in the September 2018 issue, I found that an old Windows laptop, with an external GPS puck and running OziExplorer, makes a fabulous chartplotter. The software is just a hair over $100 and is capable of using NOAA charts, USGS topo maps, aerial photographs, and any other map that can be put in registration, using only latitude and longitude of a couple of points on the map.

We first reviewed OziExplorer and several other free or nearly free navigation apps eleven years ago (see A Sampling of Free and Nearly Free Navigation Software for Sailors, October 2007). These programs, coupled with free chart downloads, bring powerful navigational tools into the hands of average sailors at reasonable cost. Three cautions, this first one applies to all charts, digital or not: confirm the charts accuracy (see In the Perfect Position to Fail, April 2016). Second, regard the primary laptop or iPad used for navigation as the ships computer and use it only for navigation-related functions (see PS Seatrials the iPad and Nav Apps, February 2012). Finally, keep your traditional piloting skills sharp and carry get me home printed charts and a handheld GPS as backup. (see Have GPS, Digital Charts, and Radar Replaced the True Art of Navigation?, January 2008).

Regarding your Rhumb Lines editorial in the October issue, What You Have Now is Probably Enough, the web is a powerful source for lightly used recent equipment that has all the function but fewer bells and whistles. Do you really need a touch screen? Do you really need a color display of boat speed? For those of us that don’t have unlimited funds, the castoffs from those chasing the brand new give us a cornucopia of excellent equipment for pennies on the dollar. Use the web, it is extraordinary.

Further comments on your report on WAG bags in the September 2018 issue: I detest the thought of carrying sewage in a tank in my Freedom 30. There is no stink reducer that works . . . period. Hoses permeate . . . period. The only way it works is if you have a yacht large enough to accommodate proper residential plumbing. Most of us do not. I have removed the Byzantine plumbing and hoses and holding tank aboard my boat. There is an epoxy plug at the bottom of my Groco toilet bowl, and WAG bags are the only thing I use unless I’m offshore, when I use a bucket. Visitors and crew say yuk at first, but they get used to it.

WAG bags will stink if used and stored aboard for any length of time. Fortunately, if you are sailing coastwise, you usually have an opportunity to offload them to the trash before this becomes a problem. A home Depot orange bucket with sealed lid is a longer-term storage option.

I would also like to mention WAG bags are sold by various surplus stores at a greatly reduced price. I recently purchased two hundred of them for about $150. Google searches for WAG bags will often yield steep discount buys.

Regarding your report on recycling silica gels, if your silica gel turns blue, then it is using cobalt chloride as the indicator which is pretty toxic. So, it might be best not to use a pot from the galley to dry it. Alternatively, there is a non-toxic silica gel that turns from orange to green as it becomes saturated with water. This may be more important if you leave desiccan’t driers in cupboards and drawers around the boat where they can release dust as the beads rub against each other. We bought a gallon of orange and use it for everything.

Excellent advice. A recyclable pie tin would be a better choice. The cobalt variety has proven most effective for fuel applications, but the orange/green variety works for other applications.

Regarding Inside Practical Sailor blog post Dont Kill that New AGM Battery, I have had two AGM batteries on my trimarans one on each boat. The first battery, a West Marine, lasted ten years. The second, a Lifeline, is nine seasons old and going strong. Both boats use outboards for auxiliary propulsion. They have unregulated 6-amp charging systems. This is combined with solar panels and charge controllers.

Currently, I have a group 31 AGM, 140 watts of peak solar power, plus the outboard on occasion charges the battery. This setup runs a small Dometic fridge 24 hours a day, all season, plus it starts the engine, runs the electronics, the tiller pilot, and charges the 28-volt drill I use to winch up the main.

My conclusion is that the battery is at close to full charge most of the time. The solar panels charge the battery slowly. The fridge (which automatically cuts off at low voltage) drains the battery a bit, but not excessively.

It seems that for one AGM, this simple slow charging system works well. I leave a solar panel connected all winter to keep the battery charged. In New England, regular lead acid batteries seldom last ten years on similar trimarans. I find the AGM to be the optimal solution if weight is not a consideration.

Some trimaran owners have switched to lithium ion of some sort with the electronic systems to control them. These tolerate deep discharges better, but for me the cost and complexity overshadow the benefits.

We will be diving into the topic of lithium ion batteries in an upcoming issue of Practical Sailor. If you have an experience to share, write to practicalsailor@belvoir.com.

Regarding your recent article on holding tanks (Cure for the Holding Tank Clog, PS August 2018). I’ve recently been resolving waste system issues. We found that the air vent to one of our holding tanks had a total obstruction. Not the thru hull opening above the water line and not the 1-inch hose from the tank to it. It was the 1-inch right-angle bronze fitting from the top of the tank to the hose. It was totally calcified. Not room for a hair.

We removed it gently from the top of the tank (in the typically inaccessible location) and cleaned it physically with a flat blade screw driver. Then we soaked it in vinegar until it looked new and reinstalled it. The diagnosis of an airway problem was made by the fellow vacuuming out the tank at a fuel dock. His hose started burping and retching. Youve got an airway obstruction, he said. Being a trained veterinary anesthesiologist this seemed quite appropriate!

My wife and I tried various schedules, but finally settled on something that works for us. We realized that the body has certain sleep cycles and it is much better to wake up in between these cycles, when you’re in a light sleep, than to force yourself awake from a deep sleep. So, one of us stands watch while the other sleeps in the cockpit.

After an hour or so, if the sleeping person stirs and the watch-stander is sleepy, we swap places. If the watch – stander is fine, then we just let the sleeper keep sleeping. We find this to be much more pleasant and less stressful than strict time scheduling. We arrive at our destination maybe a bit tired, but not exhausted.

My husband and I have never had crew. After years of a keep watch until you drop system, which usually meant I, the caffeine sensitive one, sailing from midnight to dawn and then being so over-caffeinated that I couldn’t sleep off watch. I would be useless for days after we arrived at our destination. So, we changed to a three on/three off schedule and it works very well for us. Our bodies adapt to the schedule within two days and we don’t need caffeine to get us through the watch which makes it possible to sleep off watch. With there only being two of us, flexibility is required in case one person needs a little more shut-eye or needs help with something. 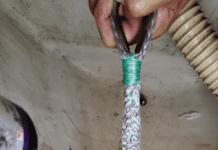