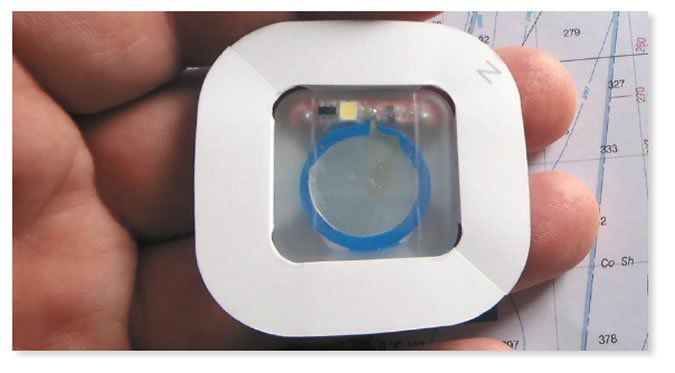 A night-time man-overboard (MOB) scenario is the stuff of sailor nightmares. Darkness adds to the difficulty of locating a person in the water, a concern that has produced many types of MOB lights and strobes (see PS, February 2016 online) over the years to better the MOBs odds. Spinlocks recently released Lume-On takes a new approach to making an MOB more visible at night by turning an inflatable life jacket into the equivalent of a floating glowworm.

Unlike typical MOB lights, which rely on sharp, brilliant flashes or beams to draw attention to an MOB, the Lume-On is designed to illuminate the life-jacket bladder. This increased area of illumination not only makes an MOB easier to spot, but also easier to keep in sight while maneuvering for recovery.

Each Lume-On package contains a pair of adhesive-backed, water-activated, white LEDs designed to be attached to the underbelly of an inflatable PFDs bladder. The LEDs have water-sensing pins that activate the lights when they come in contact with water-and it doesn’t take much water. When the wearer goes overboard, the flashing LEDs activate and the bladder becomes a light diffuser, maximizing the visibility of the flashing lights.

The Lume-On has a low profile, and is extremely lightweight and easy to install. The peel-and-stick adhesive is the same as whats used to attach reflective tape on life jackets, which should minimize adhesion failure issues. The Lume-On is waterproof to IP68 and is advertised to provide a minimum of two hours maximum intensity once activated. The LEDs will operate up to eight hours or longer, but will gradually diminish in intensity.

The Lume-On requires no maintenance, but we suggest touching the water-sensing pins with a wet finger at least annually to test operation and the brightness of the LEDs. Spinlock rates battery life at approximately five years, after which the units should be replaced. This can be done by gently peeling them off and using a cloth to rub off any remaining glue.

While all Spinlock life jackets have been tested and approved for use with the Lume-On (it comes standard on Spinlocks 5D Deckvest) that doesn’t mean it will work with all inflatable life jackets. Bladder material plays a big part here as the LEDs need to be able to light up the bladder. The more translucent or fluorescent the bladder (like the Deckvest and other high-visibility, fluorescent-green PFD bladders), the more effective the Lume-On is. Not surprisingly, bladders constructed of non-translucent material are not suitable candidates for retrofitting.

Another potential problem is installation on life jackets where the bladder is welded into the cover. The Lume-On is designed to be attached to the underside of the bladder, where it can shine upward into the filled bladder tubes. In jackets where the bladder is fused to the cover, you likely wont have access to the underside of the bladder for proper attachment. The Lume-On can still be attached on the lower, outside corners, but the visible light might not be as bright in the water as on a vest with the non-welded bladder. It doesn’t take much water to activate the lights, so theyll still operate even if theyre bobbing in and out of the water due to their position on the sides of the bladder (rather than the bottom). Once activated, the only way to turn the Lume-On off is to dry out the PFD and the Lume-On.

As with PFD and MOB lights, the Lume-On will have some impact on the wearers night-vision. But because the PFD bladder acts as a diffuser, the Lume-On should be less intrusive to night vision than bright, single-beam lights.

Its important to remember that the Lume-On is not a substitute for a USCG/SOLAS-approved life jacket light. Its meant to be an additional light source that increases the wearers visibility in the water.

The Lume-On is an easy, inexpensive way to improve a wearers visibility in the event of a night-time MOB situation. Well see how well it holds up to long-term testing, but for $20 per pair, it makes a addition to the safety-gear kit.