Named after the enterprising expat who “developed” the former Navy boat repair basin on the island of Guam, Gerberville barely qualified as marina. Our Atkin ketch Tosca was tied to a tilted and decaying two-by-four pier, one of five that lined a narrow ditch wrapping around a patch of clay spoil. Two Australian pines grew from the unstable ground, their roots seeming to hold the tiny peninsula together.

Awaiting a dreamer to have another go at her, a Carol ketch was propped on bricks in the weedy lot across the canal. The “restroom” was a porta-potty serviced every blue moon. A plastic shed offered privacy for a copper pipe, pinched at the end to deliver a drizzling shower. A typhoon whisked both structures away during our stay, but the Carol ketch miraculously survived—a defiant monument to hope.

The boat next to us was a Cross trimaran occupied by a tattooed pole-dancer who was dating the local captain who owned it. The termite-riddled deck was so soft that only acrobats could board. When the pole-dancer slipped away to more elegant digs, the disappointed captain towed the boat to sea and sank her. It skated wildly toward the bottom like a giant dinner plate.

A deeply cynical schoolteacher occupied a Pearson 28 on the other side of the Cross. He’d rise hung-over late each Saturday, belt out a hacking cough, and shake his fist at the sulfur cloud from the nearby Piti Power Plant. “Curse you power authority!” he’d yell and then go searching for pants.

I was driving a couple of charter boats crammed into the tiny space. One was the Fat Cat, a 32-foot catamaran that carried Korean and Japanese tourists (never on the same trip, of course). I was mostly a figurehead, the American anointed with the captain’s ticket.

Sure, I could handle the boat, but not like my Yapese first mate. Flashing an infectious grin stained red with betel nut, Jerry could cross the 350 miles back to Yap guided only by the swirls in his coffee mug. They reflected the swell patterns in that part of the world, he explained, and tried to show me how.

I could go on for hours trying to capture impressions of life in Gerberville—our adopted “boonie dog” who could open coconuts, the Friday-night bonfires sending sparks into the night, the beer-can pyramid that mysteriously appeared the following day. My favorite characters were the two cheerful Canadians in their twenties who invested their life savings in a marvelous espresso cart. Unable to determine which local official to bribe for the permit to set up shop, they locked the cart to a tree, where it became a steampunk testimony to the inertia of a dream delayed.

All of this is to say that I was delighted to see Drew Frye’s report this month on how to save such neighborhoods from turning into ash. The U.S. coastline is littered with backwater marinas like Gerberville. Their old 15-amp service receptacles deliver just enough power to keep an air-conditioner and mini-fridge humming—provided they don’t burn the place down.

It’s easy to regard these boats and their ragtag denizens as a nuisance, and the family-owned marinas as eyesores, tying up valuable real estate that would be put to better use by “real boaters.” But the way I see it, boaters who need 50-amp service or a genset to sustain a more civilized existence have an ocean of options to choose from. Meanwhile, the Gerberville boats and the wharf rats aboard them cling desperately to their 15-amp dreams. I hope we can allow just a little room for that. 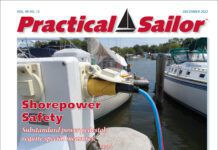