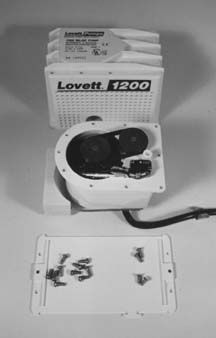 Boats left on moorings, at docks or unattended at anchor usually have an electric bilge pump, with a built-in or separate automatic switch.

The combination will handle the water between weekends if there’s nothing more serious than a packing gland that drips a drop a minute, a portlight that needs rebedding, chain plates that never were leak-proof or the liquid remnants of the weekend’s supply of ice.

In an emergency, the pump, if adequate to the task, may keep the boat afloat…for as long as the battery lasts.

Specious, indeed, is the notion that a small boat can get by with a small bilge pump. A small boat holds far less water and therefore, with the same leak, will sink much sooner than a big boat. Ipso facto, it needs a big pump.

And so too does a big boat, maybe even two or three of them. It’s a great place for redundancy.

There are three basic questions about 12-volt bilge pumps:

1. Do they move as much water as the manufacturers claim?
2. Which moves the greatest volume of water in a given period of time?
3. Which moves the most water for the electrical power used? Not much of an issue, in our view, is the cost of these pumps compared with the amount of water moved.

Other questions concern how long they last, the sturdiness of construction, the adequacy of the screen or grill that substitutes, usually poorly, for a good strum box and how easy they are to clean. (See photo of a Gear Graveyard pump that appeared to have been destroyed by debris.) 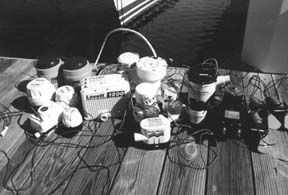 To avoid too-frequent cycling, which can be annoying and wastes electricity, automatic pumps are designed to allow bilge water to accumulate before kicking in. Shut-off points are calculated to turn the pump off before it runs out of solid water and starts sounding like teenagers sucking the bottoms of their milkshakes through straws. How noisy these pumps are is an issue with some boat owners; others like a little noise to tell them something’s happening.

Most difficult to deal with are boats with bilges that have minimum horizontal dimensions; a narrow deep bilge compartment fills quickly and the pump removes little water in each cycle, which means it comes on far more frequently. (This most often occurs in boats with internal ballast and a deep sump, often in front of or under the engine.)

This evaluation concerns itself with all of the above questions except the one having to do with how long they last. The warranties, almost all one year, suggest that bilge pumps should be replaced fairly often.

How long submersible bilge pumps can survive in the truly scuzzy quarters assigned to them is not only beyond the scope of a bench test, it also would vary greatly with the conditions aboard individual boats. Some boats leak very little and have immaculate bilges. Others may leak considerably—and have bilge water that is a mildewed slurry of human hair, oatmeal, tobacco ashes, orange juice, fingernail clippings, desaponified soap, M&Ms, bellybutton lint, the occasional shoe lace, and oil—engine, suntan, olive, Red Devil, WD40, etc.

Because bilge pumps do get clogged up, how easy they are to clean is an issue. Cleaning, which should be on the routine maintenance schedule, should be kept in mind when installing a pump.

The Collection
For this test, 20 pumps, most of them submersible, were collected. With a couple of exceptions, they are centrifugal pumps whose rotors, coupled directly to the electric motor, depend on high speed to move water, rather than contact with a housing sidewall as in your engine water pump. Because there is no contact, there is little wear on the rotors. The exceptions: Lovett, which drives a rotor with a pair of belts, and TAT, which uses a rotor to squeeze water through a hose

Most are from two manufacturers—Rule and Attwood—who have the most extensive range of submersible pumps. Others are from the respected Irish company called Munster Simms (Whale pumps); from several old-line firms, Lovett and TAT, both in Ohio, and two pumps from West Marine that are made by another old company, Johnson Pumps, in an industrial suburb called Schiller Park, across the expressway from Chicago’s O’Hare airport.

Some come with built-in float switches. (Practical Sailor, in the May 15, 1996, issue, reported on 11 separate switches, which are of four types—pivoting arm, conductivity, air pressure and magnetic reed float. All were cycled 20,000 times. The winner was the $125 Ultra Pumpswitch Sr. and $90 Jr.)

All but one of the pumps were tested routinely. The exception, the TAT, which works on an entirely different principle, is discussed separately in a photo caption.

The Test
As was discussed in the report on manual bilge pumps in the April 15, 2000 issue, the question of “lift” is important. Manufacturers rate their pumps for zero lift. It’s called “open flow” or “open bucket.” It just means the water intake, discharge and pump are in a horizontal line. They often include the “open flow” rating in the pump’s name.

The ratings are meaningless and serve only for comparison.

When lift is introduced, few pumps will pump water at their “open flow” ratings.

For this test, a 5′ lift was selected. It was the best guess at an average, for Practical Sailor boat owners.

The hose was smooth-bore Shields Series 148 of the size specified for each pump.

A constant (but adjustable) source of DC power was supplied by a Daiwa PS 120MIIA transformer and the amperage drawn was measured with a Radio Shack Auto-Range Digital Multimeter. An attempt was made to measure noise (with a Quest Electronics Model 211A Sound Level Meter) proved impractical because the pumps made too little noise when placed underwater in a heavy plastic container.

Freshwater was used and, while changing pumps, it was siphoned from the calibrated tank back down to the supply tank with a simple arrangement of Whale Quick Connect piping, which included a handy valve to hold the water column in place while changing pumps.

The Results
As was pointed out in the recent review of manual bilge pumps (in the April 15 issue), these pumps probably will not save your boat if it is holed. A 1″ hole 5′ below the waterline will admit 44 gallons of water a minute. The biggest pump (the Rule 3700) will just about stem that tide—until the battery runs out. Running the engine to charge the batteries may be critical.

However, any of these pumps may give you time to find and fix the problem.

Almost all of these pumps have lead wires that measure 27″ (Rule, Whale, West Marine and Lovett) or 32″ (Attwood). Our view is that it would be better if they were longer by several feet so that crimp connections can be made outside the moist environment of the bilge area. (The Attwood Guardian 500 has a 42″ lead; the West 2200 has a 65″ lead.

It further should be noted that Attwood pumps are not equipped with tinned wire. Tinned, fine-stranded copper wire is vastly superior to untinned copper wire because water, in time, may migrate through the wire and corrode plain copper wire.

Following are some generalized conclusions.

There was a significant range in measuring the actual volume of water moved compared with the manufacturers’ claims. The spread ran from 216% to 85%, while using 13.6V. The difference when operating at 12.2V was 148% to 68%. A reminder: The PS testing was done at a 5′ lift and compared with figures extrapolated from the manufacturers’ ratings, usually for 0’, 3.35′ and 6.7′ lifts. If the manufacturers’ figures for 0′ lift or even 3.35′ had been used for comparison, the percentages would be much lower.

So, tested while pumping at a 5′ lift against the manufacturer’s claimed volume (at zero lift), the best three pumps, when operated at 13.6V (as though the batteries were full and the engine was running), were the Lovett, the Whale Supersub 360 and the Whale Supersub 500.

When operating at 12.2V, which is far more likely to be the case (especially with an automatic switch on a boat sitting over a weekend), the best tested against the manufacturers’ claims were the same three, in different order.

Also of interest because it is a measurement of how much water a pump will move before exhausting the batteries is: Which pumps yield the most volume of water pumped for each amp used? Theoretically, given the same limited supply of amps, a small pump drawing a small amount of power might be expected to move the same volume of water as a big pump drawing a lot of power. The small pump would just take longer to move the water and exhaust the power supply.

Working at 12.2V, the above-named top-three pumps again excelled, in a different order.

The Bottom Line
Because Attwood does not use tinned wire, the company’s pumps are, in our view, less desirable than the others. Attwood’s V1250 was the top-performing pump (see chart) and it otherwise would have a lock on Best Buy. Attwood’s V500 ranked second overall. However, none of Attwood’s pumps can be recommended until it follows the recommendations of marine electrical wiring experts.

Of the two West Marine pumps, the small one did well, but the large one was a disappointment. If you want an inexpensive pump, the West Marine 500 wins Best Buy honors.

Lovett’s Model 1200, a very solid, well-executed design, performed very well (see photo on page 22), but only when supplied with 13.6V. When operated with 12.2V, it slipped down in the gallons-per-amp rankings, but still pumped more than its rating.

The best of the rest?
Rule’s Model RM1100 (a.k.a. Rule-Mate) ranked third overall, the Rule Model 27D, very modestly priced, tied for seventh, and the Rule Model 09 (a premium pump a.k.a. the Rule 5-Year) tied for ninth.

The three Whale pumps tested sixth, seventh and ninth, the latter two in ties with the above-named Rule pumps. Although mediocre performers in the volume-per-amp category, they are distinguished for pumping very close to what the Irish company claims. In addition, these new pumps are compact, easy to install and appear to be made in the Whale tradition. They’re a mite pricey.

Practical Sailor’s favorites?
For a small pump: The Whale Supersub, preferably the manual version with a separate switch.

For a medium-sized pump: The third-ranked Rule-Mate, a proven design that moves a lot of water for the amps used.

For a reliable pump: The very quiet-running Lovett 1200, even though it’s so big it might not fit in every boat’s bilge. 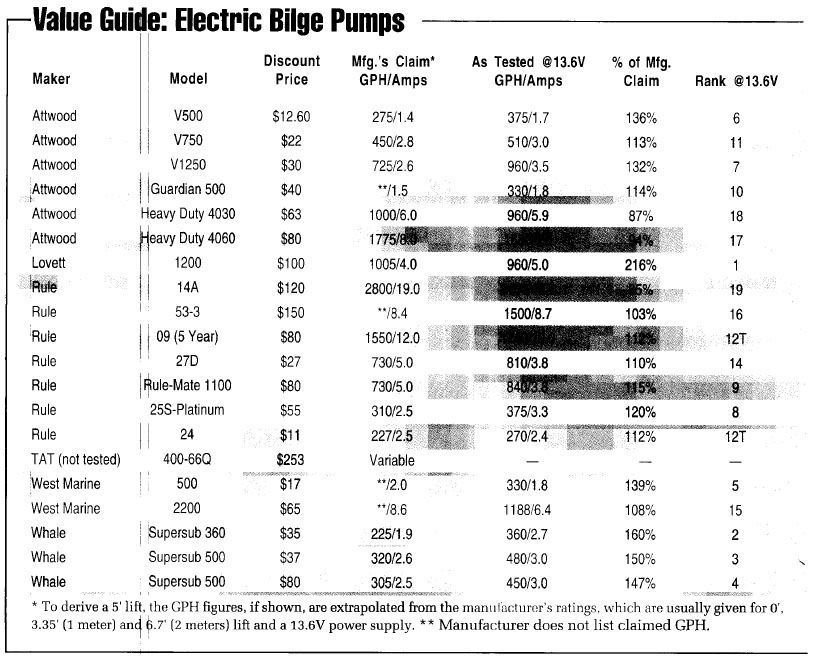 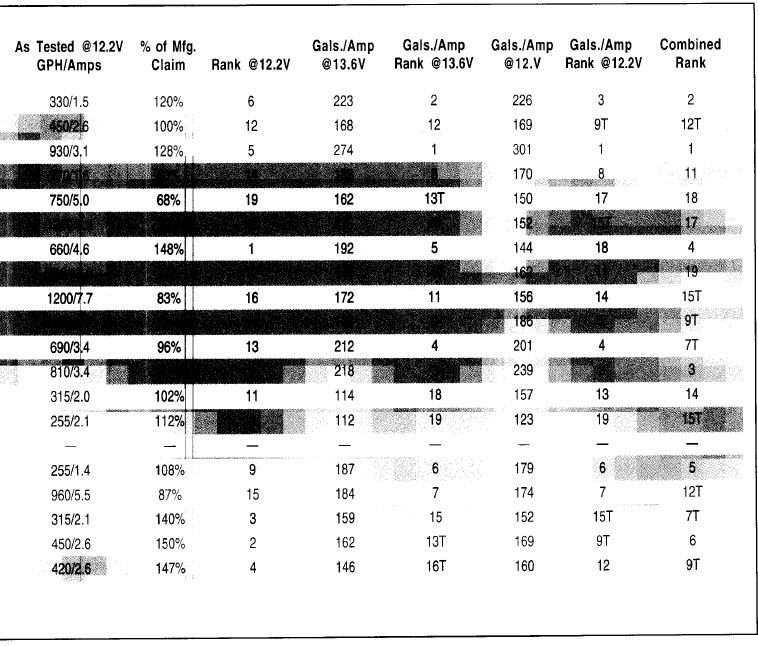 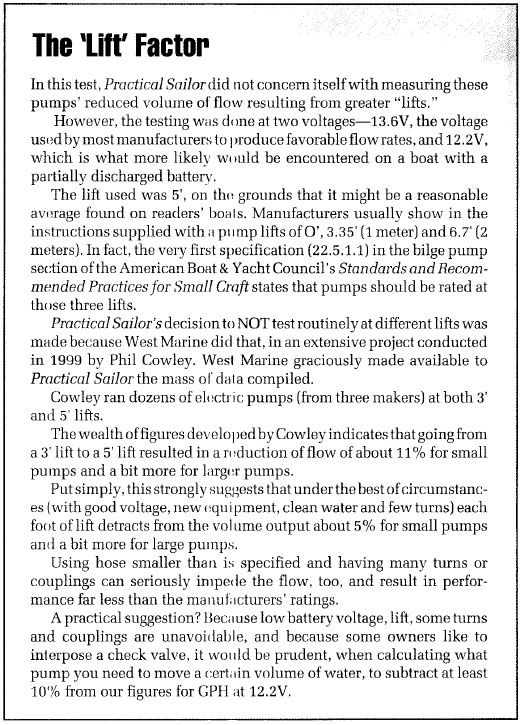