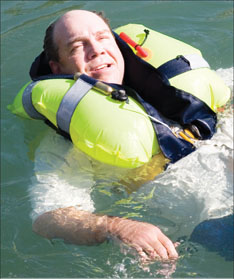 All recreational boats must carry one wearable Coast Guard-approved PFD (Type I, II, III, or Type V PFD) for each person aboard. As each year passes, more inflatable personal flotation devices (PFDs) find their way to the marine marketplace. But not all of them are Coast Guard approved.

The PFDs without Coast Guard approval are usually made overseas and carry a European safety designation. Boaters in U.S. waters can’t use these PFDs to comply with Coast Guard regulations. A European-made vest, the Crew-saver Crewfit 150N, was Practical Sailor’s top choice for an inflatable in a nine-model test published in the Oct. 1, 2004, issue.

We recently came across another inflatable PFD, also with no Coast Guard certification, from European boat equipment manufacturer Plastimo. It wasn’t tested in our 2004 evaluation, so we decided to match it up against the Crewsaver. Both carry the European safety designation EN396.

What We Tested
We retested the same Crewsaver Crewfit vest that won the 2004 test, and picked up Plastimo’s manually operated Pilot-series vest and re-arming supplies from the company’s U.S. distributor, Navimo USA, located in Sarasota, Fla.

Two PS testers donned the vests and jumped into a saltwater canal. Each PFD was rated for ease of donning and how well the buckles and straps worked. We gave higher ratings if the vest was easy to adjust, put on, and take off. Once they were on, we rated each for comfort and fit out of the water.

The manual Plastimo vest was activated once the tester had returned to the surface following the jump into the water. The Crewsaver deploys automatically after submersion.

With the PFDs inflated while in the water, the testers again rated each vest for comfort and fit. They then attempted to swim both on their stomachs and on their backs. The testers also floated on their stomachs with their heads submerged as if they were unconscious to see whether the vests would turn them face-up. Both vests successfully turned over each tester.

Testers also used the attached oral inflator tube on each PFD, and tried to adjust the straps and buckles in the water. The winner was selected based on all ratings, along with warranty period, buoyancy, area of reflective tape, and price.Plastimo pilot 150n

The Pilot-series vest is one of a trio of inflatable PFDs manufactured and marketed by Plastimo.

“The cost of certification is high and until we can be sure there would be a market for these vests given the existing products on the market, we are holding back on certification,” he said. “We believe that these vests would have no problem gaining certification.”

Our test vest, the Pilot 150N, is a manually activated version equipped with a harness and single D-ring. The Pilot series is also available with an automatic inflator or without the harness and D-ring.

Our smaller tester (130 pounds) said the Plastimo was tight around her neck. Our second tester (210 pounds) felt the Plastimo was far more constricting than the Crew-saver around the neck and throat, but wouldn’t classify it as uncomfortable. We combined these opinions and rated the Plastimo Pilot Fair for in-water fit.

When we began rearming the Pilot vest, we found the provided inflator clip did not fit properly. Paley said Plastimo is transitioning from an inflator head made by U.K.-based United Moulders to a newer version made by the same company. These two versions use two different clips. Both clips are included in the re-arming kit when purchased through retail outlets. We received only one clip—the wrong one.

Though it was easy to change the CO2 cylinder and fasten the clip on the inflator head, refolding and repacking the Plastimo vest is a more difficult job than with the Crewsaver Crewfit.

Bottom Line: We found the Plastimo Pilot to be a top-quality vest that neither fit as well as the Crewsaver nor was as easy to repack.

Crewsaver Crewfit 150N
Crewsaver makes more than a dozen versions of inflatable PFDs. The Crewfit 150N we tested is available with or without a harness, D-ring, or crotch strap. It is also offered with manual, standard automatic, or Hammar automatic inflation. Manual inflation requires the wearer to pull a handle for activation, while both auto versions deploy the CO2 canister upon submersion. Our test vest was equipped with the standard automatic inflator, crotch strap, no harness, and no D-ring.

The plastic snap-lock buckle and metal tension adjustment on the Crewsaver waist belt worked well on land with the vest not inflated. It was also easy to adjust in the water with the vest fully inflated. Testers agreed that the 150N was more comfortable in the water than the Plastimo. When inflated, it has more than enough room around the wearer’s chin and face. Crewsaver provides a crotch strap to prevent the PFD from riding up. In our original test, we noted the crotch strap made little difference in the way the vest handled in the water, so we did not retest it.

Bottom Line: We’ll stick with the Crewsaver Crewfit 150N as our top pick for an inflatable vest. Its Excellent in-water fit/comfort rating and straightforward re-arming procedure keep it at the head of its class.

Conclusions
In many regards, the Plastimo and Crewsaver vests are the same. Both carry three-year warranties, both have 33.7 pounds of flotation when inflated, both have 48 square inches of reflective tape, and both are rated for at least an 88-pound user. We still think, even though the Crewsaver 150N is more expensive, its excellent comfort and fit in the water and its easy repacking make it a better vest.

In the October 2004 article, we explained our reasoning behind recommending a PFD without Coast Guard approval. “Given their high price, it is unlikely anyone will outfit a boat with a full complement of inflatable PFD vests. More often than not, the owner of the boat buys one for himself and stocks up on less-expensive PFDs, enough to satisfy USCG regulations. So with a boat already in full compliance with the Coast Guard, we see no reason not to recommend the Crewsaver 150N in spite of its lack of Coast Guard approval.” We continue to put forth this recommendation.