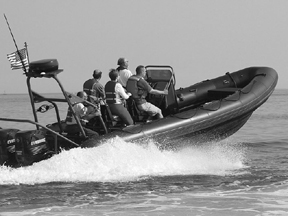 Inflatables have come a long way in a short time. Take a look at the Zodiac CZ7 (photo below). The CZ7, which stands for Civilian Zodiac 7 meter, can travel 50-plus mph, handle up to 300 horsepower, has ample seating, and can house the latest in electronics with room to spare. It sells for just under $200,000 with a pair of 150-hp outboards.

But no matter how big, fast, and fancy inflatables get, there will always be a need for small inflatable tenders that can be deflated, rolled up, and stowed in 10 to 20 minutes. In fact, Steve Lance, vice president of Defender Industries, told us that out of the 2,300 inflatable boats Defender sold last year, the average price was $1,640. “So there may be some people buying the $200,000 RIBs,” he offered, “but people are clearly still buying the boxed boats.”

We tested seven such “boxed boats,” or boats that can be broken down so they can be boxed and shipped easily. Our criteria for this test stipulated that the boats had to have soft, roll-up floors, they had to be at least 7-1/2 feet long, but less than 9 feet, and they had to carry a price of under $1,200.

In the June issue this year, PS tested the super-small boats. They were under 7-1/2 feet and sell for less than $1,000. This current crop gives you more interior room, but they are still easily stowed and relatively light.

The largest boat tested for this article came from Achilles. Its LS4-RU is 8 feet, 8 inchs long, with a beam of 4 feet, 8 inches. The West Marine RU-260 is two inches shorter, but three inches beamier.

Zodiac accounted for three of the seven boats tested: the Zodiac Zoom C240, the Bombard AX2, and the West Marine. We tested only one boat without a hard transom: the Achilles LT-4, which utilizes a motor bracket that attaches to the stern tube. Rounding out the field is the Sea Eagle 8.6 F/T. All the boats we tested come with a repair kit, oars, and pump as standard equipment.

How We Tested
Flat-bottomed inflatables are basically putt-putt boats, and really aren’t meant for high-speed maneuvering. Some of these boats can go relatively fast—with one person and on a straight course. But they’re better suited for easy, low-speed duties in protected waters.

So we decided to evaluate them according to price, ease of inflation and deflation, weight, stowability, rider comfort, steering ability, and stability. We also looked at fit-and-finish (particularly floorboard/slat arrangements), fittings and hardware, standard equipment, and warranties.

Each boat was driven by two testers. They each drove and rowed the boats alone, and then the boats were tested with both of them aboard using a 3.3-hp Mercury two-stroke, which weighs 29 lbs.

PS testers carried each boat about 50 yards to and from our truck to the waterfront. This allowed us to evaluate the various hand grabs and carrying lines of each boat.

We also took a look at the carrying bags that these boats are stowed in. We like the ones with two handles at the center that allow you to carry it in duffel-bag fashion.

Conclusions
It’s appropriate to state that none of these boats has all of the features that we prefer. We like the flush floor of the Achilles boats, but not the small oar blades. We like all the carrying handles on the Sea Eagle, and its skegs do appear to improve handling, but the seat was wobbly. The Bombard AX-2 was the best performer, but has limited interior room—and we ultimately deemed that more important than performance. The Zodiac Zoom C240 is a better-than-average boat, and one of the lower-priced ones in our group. But the locking mechanisms for the oars were a hassle to use. The Mercury is dry, stable, and inexpensive. It lacks an interior drain plug, has no lifting ring at the bow, and there are boats with more interior space. So these boats are far from perfect, in our opinion.

Nonetheless, we’d go with the Mercury 240 Rollup. It essentially gets the job done—and is the least expensive of the seven. For runner-up honors, we encountered a tie. Both the Achilles LS4-RU and the West Marine RU-260 provide ample interior space. You’ll pay for it, though. They’re both about $200 more than the Mercury. For a row-only tender, the Achilles LT-4, with its ample interior space, is also worthy of consideration.

Also With This Article
“Pictures and Specs of Inflatables Tested”