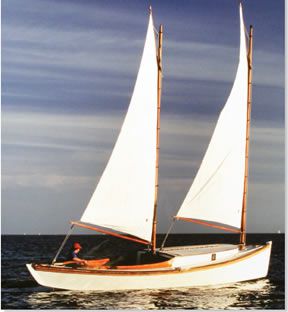 There is magic in sailing. What is sometimes harder to grasp is the magic in boats.

But it is there. It is undeniably there. It is there when first you step aboard and feel the boat come alive underfoot. It is there when the sails fill and quiet as you come out of the eye of the wind. And it is there when you take the tiller under a dome of stars and realize youre connected to something much, much bigger than a rudder. There IT is, as persistent as a heartbeat: a pulse, a throb, a jolt of I-cannot-explain-this magic.

For me, the most fascinating thing is how this happens. Boat magic isn’t borne from wisps of smoke, or conjurers chants. Some of the best magic evolves out of a most basic need. In the case of Ralph Munroes 28-foot sharpie lifeboat Egret (right ), the need was for a light boat that could skim across the shallow waters of Biscayne Bay, Fla., punch through the steep breakers in East Coast inlets, and, if asked, stand up to a Gulf Stream Norther.

Egret carried the mail, salvaged wrecks, and delivered passengers and goods to Floridas east coast well until the early 1920s.

As Munroe describes it in The Commodores Story, the book he coauthored with lifelong friend Vince Gilpin: Egret served me for several years without mishap as dispatch boat between Biscayne Bay and Jupiter telegraph station, via the Gulf Stream, blow high or blow low, often making the trip when no other boats would attempt either the stream or the surf in the shoal inlets.

One of the early pioneers in South Florida, Munroe was a lifelong sailor, yacht designer, and talented photographer who founded the Biscayne Bay Yacht Club in 1887. He served as the clubs commodore for 22 years, though it seemed an unlikely post for Munroe, who respected true mariners, but oft en poked fun at the yachtsmen of his time. The club he founded is alive today, and it remains a club for mariners, including his great-great grandchildren. His former home in Coconut Grove, affectionately called The Barnacle, is now a state historic site, full of intriguing memorabilia that captures the resonance of Munroes early days on the bay.

Perhaps Munroes most famous contribution to sailing, though, is a round-bilge sharpie design called Presto. An evolution of the New Haven sharpies that inspired Egret, the 41-foot shallow-draft ketch was launched in 1885. When its Staten Island builder, Chris Brown, stepped aboard and nearly buried the rails heat once condemned her, Munroe writes. The next day, Munroe added the 4.5 tons of internal iron ballast as hed intended and sailed off to see a cup race off Sandy Hook, where, in a fresh breeze she handled perfectly and showed no signs of tenderness.

Defying popular assumptions regarding hull form and stability at sea, Presto had performed her first act of magic-a feat that even today, designers are trying to duplicate.

It is, as our boat review reflects, a very tough act to follow. 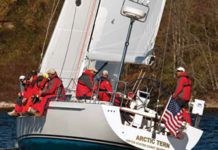 New Boat Review: A Look Inside the New Leadership 44