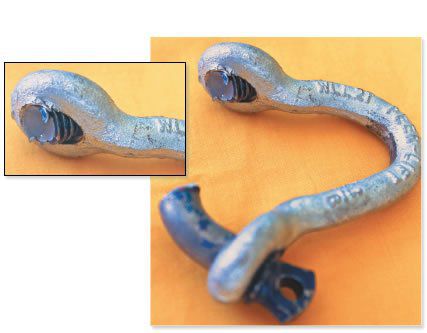 In the August 2015 and October 2016 issues, we reported the preliminary results of our anchor-shackle tests. However, more recent testing has raised questions about the conclusions-most notably our Best Choice designation of the Peer-Lift brand anchor shackles, sold by Peerless.

This report details our results from further testing, which was prompted by our most recent report, Anchor Shackles, Round II. (See PS October 2016 online.) It updates and corrects some of the information that appeared in the previously published articles.

For easy comparison, this test looked only at 3/8-inch bow shackles, as these are a common size and fit 5/16-inch and some 8-millimeter metric chain, which are commonly used as anchor rode on 30- to 40-foot sailboats.

We further narrowed the test group for this round to samples from two brands: Peer-Lift (sold by Peerless), because some readers that they could not find Grade B 3/8-inch shackles domestically; and Canada Metals Pacific (CMP), because the company indicated that its own test results are not consistent with our results.

We are also publishing the results of tests carried out by Fasco, the distributor of the West Marine shackles like the one we previously reported on. Based on Fascos findings, we will be following up with our own re-test of the West Marine-purchased anchor shackles.

In the U.S., shackle standards are spelled out in U.S. code RR-C-271 G, Federal Specification for Chains and Attachments, Carbon and Alloy Steel. Here, we mainly focus on Class 2 (screw-pin) shackles that meet or exceed Grade B specifications. These specifications, which have been updated in recent years, are or similar to those used by standards groups around the world.

From a consumer standpoint, the important thing to know is that there are two grades of shackle: Grade A and Grade B. Grade A shackles are the most common, while Grade B shackles, subject to more stringent standards, are much stronger. Although some Grade A shackles are still made in the U.S. and Europe, many now are produced in foundries in China.

A 3/8-inch, Grade A shackle has a working load limit (WLL) of 1 ton and will typically show a maximum breaking strength (MBS) of 6 tons. (Warning: Only the WLL, never the MBS, should be used for matching load limits in an application.) Grade A shackles do not need to be proof tested, except by request. (In simple terms, proof testing is a straight-line pull with a load that is two times the WLL, after which the shackle pin should still be removable by hand.)

Grade B, 3/8-inch shackles will have a WLL of 2 tons and a maximum breaking strength between 9 and 12 tons, depending on the makers safety factor. Grade B shackles only need to be proof tested when they are designated for lifting applications.

Makers caution that shackle strength is significantly reduced when the shackles are loaded from the side. Side-

loading shackles is relevant because some newer deep-set anchor designs set so firmly that they don’t readily re-align with the load in a wind shift, and the shackles can lock up. A 45-degree load reduces shackle strength by 25 percent, and a 90-degree load reduces it by 50 percent.

In the extreme, this means that the working load of a Grade A, 3/8-inch shackle loaded at 90 degrees will have 1,100-pound working load while your matching 5/16-inch, G30 chain will have a 1,900-pound WLL. If you prefer a higher-strength chain (G43, G70, etc.), then the side-loaded shackle is an even smaller fraction of the chains WLL. These loads are compared in the accompanying table.

The main players in the galvanized-shackle market are Crosby, Peerless, Campbell, Columbus Mackinnon, Canada Metals Pacific/Titan, and Van Beest. Most chandlers, however, carry imported stock of China-made Grade-A type shackles not associated with a particular brand; an example is the shackle that we tested previously that had been purchased from West Marine.

All of our testing was conducted on a Wirop 100 horizontal test machine at J.L. Robertsons near Newcastle, Australia, using the same equipment as our previous tests. In the test arrangement, the test shackle is retained within two larger shackles.

One shackle vendor (Peerless) said the larger shackles could skew results, since industry-standard tests call for a pulling attachment with a diameter no greater than the test-shackles pin diameter. We doubt the larger shackles (used for efficiency) had a significant impact on our results, and all shackles were tested the same way. Its important to note that some anchor shanks have sharp edges that would certainly induce failure at lower loads than our test did.

As the test shackle was pulled until failure, testers recorded elongation and the failure point. Permanent elongation prior to failure is allowable-and is even required under shackle standards-because this ductility offers a warning when a shackle has been over-stressed. If your shackle body or pin is bent, your chain also deserves a close inspection.

The shackles supplied are standard Peer-Lift G80, 3/8-inch (10 millimeter), galvanized bow shackles (stock number 8058403 and barcode number 42228 08303). They are described in marketing literature as being Made in China.

The Peer-Lift G80 shackles are embossed with WLL 2T PEER-LIFT 3/8 on one side and O 5/15 on the other. We were told that all of these shackles are proof tested to 8,800 pounds (twice the WLL).

We found the load test results surprising. The shackle failed at 16,804 pounds, well below its 20,000 pound specification. As with every shackle that we tested, the shackle-pin sheared. However, an inspection of the failure showed necking at the threaded end of the pin that we did not see in the pins of other shackles we tested.

Necking could pose more of a problem under side loads, as the shackle body opens wider and the pin slips free before actually breaking. We have seen a similar real-life failure in one sample that was sent to us during the course of this testing.

Bottom line: This shackle is fine for non-critical applications and moderate loads well within its working load limits, but we do not recommend it for use in an anchor rode.

Immediately after testing the Peer-Lift shackle, we tested a 3/8-inch, CMP Black Pin shackle thats also sold as a Grade B shackle. The shackle was marked WLL 2T, TITAN HS 3/8, but there were no unique marks indicating batch.

We have tested three of these shackles, each bought separately from local chandleries at intervals of about nine months apart. They are all marked the same way; there appears to be no batch mark. According to CMP, these Black Pin shackles are made at CMPs wholly owned factory in Ningbo, China, where they also manufacture their Titan chain and Rocna and Vulcan anchors.

The Titan shackle we evaluated for this round achieved an ultimate breaking strength (UBS) of 17,630 pounds, well below its advertised specification of 10 tons. This is consistent with our test results of the two previous Titan Black Pin shackles we tested, which also failed below the manufacturers specification.

Failure was simply the shearing of the pin. The integrity of the pin in the eye remained good.

Bottom line: This shackle is fine for non-critical applications and moderate loads well within its working load limits, but we do not recommend it for use in an anchor rode.

As a result of our questions regarding the unusually high elongation in the West Marine (Fasco) Grade A type shackles that we tested (see PS October 2016 online), shackle supplier Fasco tested six samples, three from West Marines inventory, three from Fasco. They sent us the full test report, including images for our testers to review.

Consistent with our own findings, the Fasco tests indicated all of the shackles were unharmed at the proof-test load for Grade A (4,400 pounds) and exceeded the Grade A breaking loads. Fasco also demonstrated that the elongation was also within specification.

Bottom line: West Marine took our report seriously and responsibly followed up with its own testing. These and other Grade A shackles are fine for non-critical applications within the WLL. However, for anchoring, Grade B shackles proof-tested to 8,800 pounds are a better choice.

If you do an Internet search for shackles, you will find hundreds of shackle manufacturers in China. The products are commonly unbranded-or even unmarked regarding load specifications. They are stamped China. The distributors of these shackles often make no testimony to quality, or offer evidence of proof testing. We see no reason to use these shackles in an anchor rode simply for the sake of saving a little money.

Our research confirmed what many experienced cruisers have known for a long time: for high-quality shackles, lifting supply houses usually offer a better selection than the corner hardware store or big box marine retailer. Some chandleries and commercial fishing supply stores also carry Grade B shackles.

So far, our tests have identified that Crosby (209A), Campbell, and some Peer-Lift shackles meet Grade B specification. However, this round of tests shows that not all Peer-Lift Grade B shackles lived up to our expectations. The availability of these shackles in the U.S. also seems to be a problem.

Foundries abroad can produce excellent products, but unless you are confident that a shackle meets the Grade B standards, stick with known brands, preferably manufactured in the U.S., that clearly state that they meet Grade B standards. We found those made by Campbell and Crosby to be the most readily available in the U.S.. Both manufacturers also produce Grade A shackles, so be sure to specify Grade B.