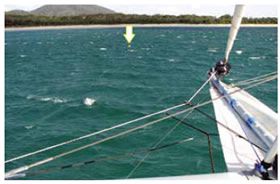 Our recent test comparing the breaking strength of new galvanized G70, G43, and G30 chain yielded some surprising findings and made us consider just how much, if any, advantage is gained by upgrading from G30 to a higher strength chain, and who would benefit from such a switch.

Chain is an ideal anchor rode for several reasons-it resists abrasion from coral and rocks; it helps anchors set by applying a load that is parallel to the sea bottom; etc-but one of the strongest arguments for using chain as an anchor rode is catenary.

The catenary, that curve (or sag) of the anchor chain, is said to provide a buffer to snatch loading. The idea is that the energy generated by a sailboat at anchor that is yawing and subject to the wind is absorbed by the catenary. As wind increases, catenary decreases. Heavier chain adds more catenary and can absorb more energy. The more catenary, and the more and heavier the chain, then the more energy the catenary can absorb.

The problem that arises is that we can only carry a finite amount of chain, dictated by the size of the chain locker or the weight of the chain itself. Chain lockers can be made bigger, but eventually weight becomes a real issue. (See PS March 2011, April 2011, and June 2011 online for more on anchor lockers.)

Several influential cruisers, like Steve Dashew, have found that once the wind reaches a certain speed, catenary is no longer effective-what little dip remains is not enough to absorb the snatch loading of waves.

By this philosophy, it would be better to carry a smaller chain of the same strength-i.e. G43 or G70, instead of G30. This will allow you to either shed weight or carry a longer chain to allow anchoring in deeper water. However, the smaller-chain philosophy also suggests deploying more chain to achieve a scope of 7:1 (anchor rode-to-depth ratio) but this offers negligible advantage, as the angle of pull changes only slightly. Consequently, the only reason to carry longer chain is to allow anchoring in deeper water.

There are a couple provisos to the smaller-is-better approach. First, the chain should never be shock (or snatch) loaded-so long, shock-absorbing nylon snubbers are important (see PS November 2013 online). The second proviso is that the anchor must be efficient and correctly sized.

The advantage of saving weight depends, to a degree, on the boats design. Many long-time cruisers modify their lockers so that the chain feeds back to the center of the boat where it adds stability. The lighter-chain argument has more sway over owners of performance multihulls or light-displacement monohulls that are more sensitive to overloading.

Being the kind of people who carry three heavy anchors, including a 70-pound folding fisherman, were not persuaded to save weight by switching chain. We also believe it is easy to underestimate the advantages of catenary in typical anchoring conditions. However, we recognize that plenty of cruisers sail multihulls that benefit greatly from modest weight reduction, or have monohulls with criminally small anchor lockers.

This is why we are moving forward with further testing, including abrasion resistance, which should offer a better picture of what sort of durability G70 chain might offer.