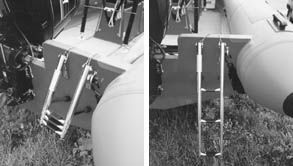 Ladders for use around and aboard the boat? For docks and rafts, hook-on-the-rail models, stern mounts, folding, extending, the new center bar sport ladders…there are lots of them. Look in any chandlery or marine catalog.

Here’s a new one, just introduced by Practical Sailor readers Jill and Harold Oldak, who sail a Whitby 42 out of Naples, Florida. Oldak, a successful medallion manufacturer from Long Island, was instrumental years ago in the development of furling jib gear. He’s retired now, but said:

Harold’s ladder, meant primarily for the sterns of inflatables, but usable also on any boat with a stern near the waterline, is a telescoping three-stepper that is 34″ long when extended and only 15″ when retracted.

Made of very well-fitted sections of thick-wall stainless steel tubing, it is retracted or dropped down with line that is threaded down both legs. If the line is secured within reach, the ladder can be extended by someone in the water. Rather than leave the ends of the legs raw, the Oldaks fitted black plastic caps, both top and bottom. The caps smooth the operation and prevent chafe on the line, which is New England Ropes’ Sta-Set braid.

The thick-wall sections, which have outside diameters of, from top to bottom, of 1-1/4″, 1″ and 3/4″, have close-fitting collars at the joints. Because of the sturdy tubing and tight tolerances, there is but about 1-1/8″ play at the bottom step.

A pair of 6″ struts make the ladder adaptable for an angled transom or to make a good stepping angle on vertical sterns. For sterns that are not conventional, the Oldaks include two solid blocks of nylon to alter the angles. Mounting hardware and a cleat are included.

The steps—more stainless tubing flattened in the middle and butt-welded neatly to the legs—have black plastic treads that snap in place and look like they’ll stay put.

In addition to telescoping (which on more boats would bring the ladder up clear of the water), the ladder folds up on its hinged mounting brackets, which are heavy stainless with three 1/4″ holes for mounting bolts or screws.