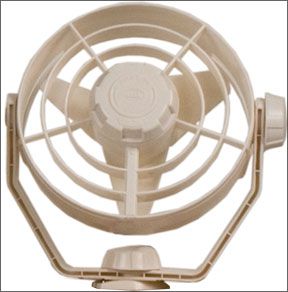 While its no gold mine, the market for cabin fans is potentially huge, including RVs, cars, trucks, and boats. So it was no surprise to us that one of the big players in this field, Canada-based Caframo announced it has refined two of its most popular designs, which we tested in 2008.

Back in April of last year Practical Sailor evaluated 11 fans from seven manufacturers. From Caframo, we tested the Camano, Bora, Kona, Sirocco, and Ultimate. Also in the lineup was the Fan-Tastic Vents Endless Breeze, Hellas Turbo Fan, HotWires Port Fan, MarinePros Tornado Fan, and oscillating fans from SeaBowld and West Marine. All were specifically marketed to boaters. Prices ranged from $27 to $100.

In the end, testers came up with five recommended fans and one Budget Buy. The testers favorites, in rough order of preference, were Hellas Turbo Fan, an enduring, efficient design that generated a moderate breeze with very little noise, the heavy-duty Kona (held back only by its price and metallic grill face), the sophisticated Sirocco (featuring four different timer settings), and the Port Fan, a super-efficient fan designed to fit in opening portlight.

The Budget Buy, a $27 oscillating fan from the now-bankrupt Boaters World, is not available and not missed. (Weve never had much luck with oscillating fans anyway.) The oversized Fan-Tastic Vent, essentially a small box fan, is in a class by itself, and has been put into service on one of our test boats, where it is holding up well.

The efficient Bora looked to be the likeliest contender to knock off Hellas Turbo Fan, a top pick in Practical Sailor tests going back 10 years, but it fell short and did not make our list of recommended fans.

Since that 2008 test, Caframo went back to the drawing board and redesigned its 748 Bora. The company also introduced a new weatherproof version of the Kona. Testers were pleased to see that the new fans clearly addressed complaints raised in our last test: The Bora radically changed its blade design to pump more air, and the Konas corrosion-prone metal grill was replaced with a plastic grill that will hold up better in salt air. At presstime, we had not yet had the opportunity to test the Kona, which was released in late June, but testers did get a chance to evaluate the Bora.

Testers put the new Bora through the same routine used for the other fans. While attached to a mounting board and plugged into a 12-volt power source, the fan was run at its available speeds and tested for sound and wind output and current draw in an enclosed room. The sound was tested at 3 feet (directly in front of each fan) and at 1 foot (from the side pointed at the motor housing) using a Radio Shack digital sound level decibel meter attached to a camera tripod. It was set for the “A” weighing level, which eliminates low frequencies below 500 Hz.

The air output, or wind speed, was tested in feet per second using a Kestrel 1000 pocket weather meter attached to a camera tripod and set 3 feet in front of the fans. Testers were well aware that simply measuring wind speed coming off a fan is a relative indicator of forced air movement, and can be different from the total volume of air or CFM (cubic feet per minute) that manufacturers use to rate their fans. Current was measured at 12.3 volts with an Actron digital multimeter with accuracy /- 1.2 percent.

Caframo changed four key components in its Bora. It changed the back grill to a spoked design that improves air flow by 12 percent, according to their data. (The Hella, it should be noted, has no back grill, presenting no obstacle to air-flow but presenting a painful surprise when you groggily reach up to adjust the fans position in the middle of the night.)

In addition, the mounting hub was improved with a brass nut and bolt, offering a more secure setup. The switch was redesigned to be more robust and include a power-saving low speed.

The most notable change however, was the switch from four blades to three. Intuitively it would seem that reducing blade area would generate less not more breeze, but it soon becomes obvious why this is not the case. At some RPM, the disc area occupied by the blades interferes with air flow and performance is reduced. The new Bora has a slightly-reduced the blade area and more camber than its predecessor.

The new Bora data, appearing in the table below, reflects a 7-percent increase in breeze and a significant drop in noise, down to 55dB from 65dB, over its predecessor. The noise issue bears significance, since the Hella has developed a mild rumble at low speed, which seems attributable to blade balance. Our only gripe with the Bora is that one of the fans switches failed shortly after it arrived. Though less sophisticated, the Hellas simple two-speed contact switch seems more robust and user-serviceable in our view.

Bottom line:Based on the new data, the Bora has climbed up into the recommended rankings. The switch issue concerns us, but Caframo insists this was an isolated case, and weve not heard widespread reports of switch failure.

The Nov. 1, 2000 issue a “Cabin Fan Destruction Test,” involved mounting the fans and leaving them to operate continuously until failure. Top finishers were the Hella Turbo and Caframo Ultimate. We are launching another fan “death match” featuring the favorites from our recent tests, as well as the Ultimate, since it faired well last time. The new Kona, which apparently can survive a dousing, will be added to the test as well. Look for updates in future issues.