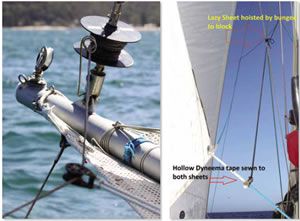 Over the years weve owned Josepheline, our 38-foot Lightwave catamaran, weve figured out a few simple fixes to some niggling onboard problems-some boat hacks, if you will-and we thought wed share a few in the hopes that other boat owners may benefit. If you have any little fixes of your own that youd like to share, email your story to practicalsailor@belvoirpubs.com.

One early challenge aboard Josepheline was setting the screacher. Our screacher is furled around its luff, so theres no forestay. We have modified our furler with a lubricated ball-bearing swivel at both the drum and at the halyard. When the screacher is deployed, it unfurls at considerable speed, and at the instant of set, the furling line can overshoot and fall off the cage-less drum. Furthermore, when sailing and travelling over swells, the drum rotates, say a quarter-turn, and as the sail fills and luffs, the furler line may fall off the drum. If the furling line falls off the drum, its impossible to furl the sail.

Our solution: Attach a bungee cord to the end of the furling line so that the bungee introduces tension at the point when the screacher is almost completely unfurled. The load, from the wind, is sufficient to completely unfurl the sail and stretch the bungee. Consequently, when the screacher is set, the furling cord is always under tension-but not so much that its impossible to grip the cord for re-furling. We have added further tension with a bungee barbour haul and a small bullet block.

Youll need to play around with tension to get it to work successfully, but ours has been flawless for more than five years.

Initially, Josepheline was supplied with a self-tacking jib, which was easy to tack, but the sail was so small that it was of little use unless the wind was over 20 knots (and completely useless downwind). We changed to an overlapping 150-percent genoa. This introduced new problems, the main one being tacking the genoa. As with many older boats, we had winches, horn cleats, rope clutches, and halyard bags mounted on the mast. These were not an issue with a self-tacking headsail, but they became snagging nightmares when tacking the overlapping headsail. It was inevitable that before any tack, someone had to go to the mast and lift the lazy sheet clear of the hardware.

The solution was again the simple bungee cord. For managing the headsail, we used a small, lightweight bullet block attached to the forward diamond shroud, as high as possible; on a monohull, you could attach it to a lower spreader. One piece of bungee is attached to another small bullet block on a sheet (sheet runs through block), then its run through a bullet block up the mast and down to a second bullet block on the sheet. When one sheet is in use, the lazy sheet is hoisted up the mast to the upper block, lifting the sheet away from hardware on the mast.

Advantageously, the setup also lifts the sheets high enough that we can walk under them when at anchor.

Similar to the headsail sheet fix, we used bungee cords to control runners in our running-backstay setup. Lazy runners usually have a very large block at the lower end that can decapitate an unsuspecting crew if left swinging. One way to avoid this danger is to attach both runner blocks via bungee to each other and to a small bullet block mounted high on the backstay. One length of bungee is run from one runner block through the backstay block and then through the other runner block. When one runner is tensioned, the bungee hoists the lazy runner block to the bullet block on the backstay, and out of harms way.

We used 8-millimeter bungee for the lazy sheet and running back fixes, and the bungee cord lasted more than five years in both applications.