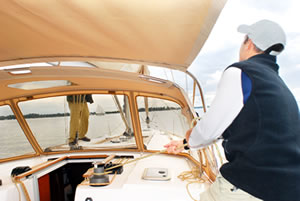 Rope clutches are a great innovation that can help sailors better control the lines that lead aft to the cockpit and those that cluster around the mast base. But as with many good things, there is the risk of over-doing the benefit.

Clustering more than three or four lines around one winch takes some serious consideration, especially in cases where one or more of these lines are called on to quickly carry out critical tasks. The list of high-priority lines that should not be a part of these clusters and have dedicated winches of their own include the main sheet, genoa sheet, or spinnaker sheet/guy, and, on a multihull, the traveller. These lines often need to be instantaneously eased and are best handled independently on a winch of their own. Making them part of a cluster of incoming lines can lead to a real cluster-well, you get the picture.

On the other hand, theres nothing wrong with multitasking a single winch with line-handling jobs that do not require such an instantaneous response. Using rope clutches for reefing lines, halyards, topping lifts, furling lines, and down hauls makes sense-but the real art lies in sorting out which combinations belong together.

Add the main halyard into the mix, and you have a different story. Its easy to imagine a reefing situation in which both the mainsail halyard as well as reef line need to be handled at the same time. It makes much more sense to keep the mainsail halyard clustered with another group of lines around another winch, perhaps located on the coach roof adjacent to the other side of the companionway.

Once the line-handling geometry has been optimized and leads from the mast and foredeck have been feasibility tested, its time to do some clutch-mount engineering. Keep in mind that the loads imposed on a rope clutch are identical to the winch that they are paired with.

The winch is usually secured by six or more bolts, it has a wide circular base, and is mounted on a heavily-reinforced part of the cabin house. Builders locate high density in-fills at such locations or use extra layers of FRP laminate to replace core material in an effort to better handle such point loads. If you are adding rope clutches to a boat that was designed and built without them, you need to make sure the deck structure in the area is capable of handling the same loads as the winch-even as those loads are now focused on a smaller base and secured with just two or three through-bolts.

Sailboat structure is generally lighter at the top of the coach roof where lesser loads are anticipated and lighter weight helps performance. When a cabin house is laminated, fewer units (layers) of FRP are added to the structure than you find in the hull. Only in areas where designers anticipate high loads is the lower-density core replaced with higher density material. So when it comes to fastening a gang of rope clutches, picking the right lead angle and ergonomic location are two important steps in a three-step process.

A typical installation would involve removing the balsa core where the mounting bolts will be tensioned and filling the area with high-density epoxy. The process is described in most boat repair books like Don Caseys This Old Boat, as well as in free downloads from epoxy maker West System. For a backing plate, you can use the same thickened epoxy to bond a plate of G-10 (a plate as thick as the fasteners is usually adequate) to the underside of the deck. Using only a large diameter washer to reinforce a clutch mounted on the thin outer and skin of a coach roof can be asking for trouble.

Like a mast-mounted winch, which is usually fastened with six or more screws to a thick alloy plinth thats welded to the spar, a rope clutch also needs a rugged mount. They can be tapped into a thicker metal base thats been welded to the spar or if a backing plate can be slid into place when the spar is unstepped, the stainless steel fasteners can be tapped into this thick backing plate. By using a thin sheet of Teflon or other dielectric plastic under the clutch, and Tef-Gel (www.tefgel.com), Duralac (www.llewellyn-ryland.co.uk), or ECK (www.eckcorrosion.com) on screw threads, galvanic problems can be prevented or at least greatly reduced.