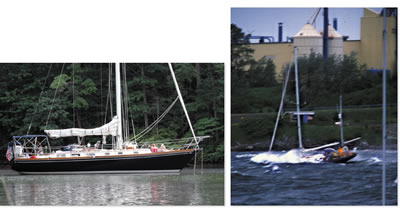 When the forecast turns bad, and its time to find shelter in a new cove or harbor, questions arise about the holding ground, swinging room, and the influence of tide, current, and surge. But there should be little question about the ground tackle and whether or not its up to the challenge at hand.

Its true that no anchor comes with a written guarantee to always set and hold, and there are conditions in which each may fail, but the more time one spends anchored out, the more overkill or ground tackle safety margin is warranted. During our acquisition of sea sense, we inevitably discover the range of conditions that our primary (working) anchor can handle, usually discovering its limitations the hard way.

Over the years, Ive come to know the idiosyncrasies of the 45-pound CQR plow that Ive used as the primary anchor aboard Wind Shadow-a 9-ton Ericson 41 sloop that my wife and I sailed around the world and have owned for nearly four decades. The comments that follow describe my experience with a 45-pound Manson Supreme, a more modern, claw-type anchor, which I have been field testing during the fall of 2013 and summer of 2014. My initial impressions and technical discussion of the design differences between the Manson and the CQR appeared in Real World Anchoring in the March 2014 issue.

Every sailor dreams of the perfect anchor, and anchor shoppers read ad copy that would make a patent medicine salesman blush. Even hard data must be put in context. Take for example holding power tests that often yield utopian statistics measured in an optimum substrate, using a gradual increase in tension rather than the jerks and pulls that really occur in a gale-ridden, sea swept anchorage. Add to this the fact that whats actually on the bottom often defies, rather than concurs with the bottom type that is spelled out in chart symbols. Theres also the anchor-dragging influence of a yawing sailboat in gusty conditions. These are the factors that must be added into the anchor selection equation.

In short, picking your working ground tackle involves more than a look at length and displacement tables. It involves developing an awareness of the range of conditions in which youll cruise, your boats windage, and the threshold defining that its time to augment the working anchor with the heavy-weather alternative.

This last statement deserves some closer scrutiny. The working anchor is akin to a photographers favorite zoom lens, a versatile optic that falls a little short when used at maximum zoom. Like the lens, a working anchor isnt at its best when pushed to the upper limit. One relatively proven approach is to use an oversized working anchor, one that is more immune to the gusts from an unanticipated single-cell thunderstorm or pumped-up cold front. But there will be a point where its time to shift into storm-anchoring mode, and having to haul up the working anchor and shackle on a bigger alternative, then re-anchor, is out of the question.

My own solution to this situation is to leave the working anchor in place and reinforce it with a second anchor. In these cases, I deploy my storm anchor-a 65-pound, Luke fisherman anchor that can be separated into three parts for stowing-so that the two rodes form a narrow-shouldered V-pattern from the bow. I use 50 feet of 3/8-inch, high-test proof coil chain and -inch three-strand nylon as the second rode.

This gameplan is based on having a working anchor that I can rely on up until the forecast promises a very serious gale, storm, or worse. Keeping track of mid- and long-range weather is as important to the anchored cruiser as it is to those underway.

When it came to choosing primary ground tackle, Ive learned the value of anchor overkill the hard way. It took several 0300 anchor-dragging episodes to drive home the importance of staying put. Since then, whenever a blow came through the anchorage, I never complained that my anchor was too large, or that I had too much chain deployed. I suspect there are many others like me, who initially blame their anchors failure on poor holding ground, and only after several dragging incidents in the middle of the night-running lights, engine coughing to life-do they see the logic in beefing up their ground tackle system.

The tricky decision lies in defining the range of usefulness of your primary anchor and knowing how and when to downshift to the storm anchoring configuration. The first decision is whether or not you want a working anchor that can keep you stuck in place even as the anemometer records gale-force gusts, or whether you adhere to the opposite approach and want less weight in the bow and an easier anchor to handle. If your answer is yes to both, youre out of luck, because despite claims to the contrary, lightweight anchors and ground tackle dont deliver superior holding power in a wide range of conditions.

The challenge is how to come up with the right compromise when it comes to picking your primary, everyday working anchor and ground tackle. Its a balancing act that starts with the recognition of the tradeoffs. For example, the more manageable the anchor, the less likely youll stay put during the next unanticipated thunderstorm or line squall. The casual, fair-weather sailor may get away with a lunch-hook approach to anchoring, while the more committed cruiser cant afford to judge ground tackle based upon the convenience of deployment and ease of retrieval.

More than the anchor

The heavy-duty bow roller has become the emblem of anchor-out cruising. New Zealanders call it a spare man because its as useful as an extra crew. What it affords is a reliable means of handling ground tackle and a sound stowage spot for the anchor once it has been retrieved. In some ways, the roller has roughly defined the pattern of the cruising anchor. Plows, the Bruce, and lately, the popular claw pattern shapes all nestle nicely in these roller-assisted stem fittings. Danforth, Northill, Fortress, Luke, and Herreshoff fisherman-style anchors can engage and grab hold of the bottom with vengeance, but they are less than ideal when cranked up to the roller for storage.

The reason I settled on a 45-pound CQR during our five-year voyage around the world was its versatility. When teamed up with 250 feet of 10-millimeter (3/8-inch), short-link chain, it created a formidable combo ready to grab hold in wide range of conditions, and on the odd occasions when Wind Shadow did drag, she did so slowly, and the anchor would usually reset when more scope was added. No question that a Danforth or Fortress pattern has more holding power on a pound-per-pound basis, when buried in a sandy bottom, but what happens in weeds or rocks, is a very different story. And so after decades of familiarity, I gave a lot of thought when it came to a long-term test and a possible replacement for my tried-and-proven CQR.

In the end, I had to respond to questions such as, Why do you want to plow the bottom, and Isnt staying put the real objective? And so after considerable research, I decided to give the CQR a rest and to sea trial the same-weight Manson Supreme, an anchor that PS contributors Beth and Evans Starzinger put through extensive field testing and wrote about (see PS November 2008 online). Its hook-shaped fluke was designed to dig deep and bury rather than plow. I missed the drop-forged steel shank of the CQR, but the high-tensile steel of the Manson improved the bend resistance of the flat shank, making it more resistant to side loads than other anchors of this type (see PS May 2013 online). The shape of the shank and how it meets the fluke conforms well to Wind Shadows bow roller, and the bow overhang prevents any gelcoat scrapes and dings during anchor retrieval. In short, the swap from the CQR to the Manson didnt require any ground tackle-handling modifications.

With over a year of field testing astern, Ive grown to appreciate the Mansons quicker setting and improved holding characteristics. The claw-like fluke is quicker to bite into the bottom and digs deep, making it easier and faster to set, and allowing it to stay put better with shorter scope. In many of todays crowded anchorages, the latter is an appreciated attribute.

Initially, I was uncertain about the roll bar, both its intended function and what unintended consequences that might result. So far, my chief worry-that a rock or debris might get stuck in the throat and interfere with anchoring-hasnt been realized. On the contrary, the roll-bar had some unintended bonuses.

The first thing I learned was how the roll bar kept my asymmetric spinnaker from snagging on an anchor protrusion. By comparison, the three-lobed Bruce pattern seems to behave like an unwanted auto-cleat ready to snag any sheet or guy that came near it.

So far, I havent weathered a survival blow in a poor anchorage with the Manson, but weve had enough bad weather to form a solid impression. A few hungry summer thunderstorms and a few cold fronts-one bearing 50-knot gusts-gave the anchor a workout. In all of these instances, the Manson delivered more bottom holding power than my CQR.

The clearest evidence of the anchors efficacy came during what I call the unsticking test, or the effort required to break the anchor free after a gusty encounter. Usually, after I had shortened scope until the bow was nearly directly over the CQR and I applied a slight bit of thrust, the anchor would break free. Now, with the Manson, the same technique often requires more than minor nudging, a sure sign the anchor was buried more deeply in the substrate.

My gameplan for handling a really bad blow remains fundamentally unchanged. The Manson will remain in place, and I will use a little power to yaw Wind Shadow in the direction of where the new breeze would come from, dropping the Luke storm anchor and settling back, so the two anchor rodes create a V-shaped pattern off the bow with a spread of approximately 45 degrees. This delivers optimum holding power and doesnt require too much anchoring gymnastics.

Staying put is all about selecting an oversized anchor; using rode that can take the shock loading, abrasion, and fatigue; and-crucially-the nautical commonsense of picking an anchorage that gives you a fighting chance of weathering the blow. Stacking the deck in your favor means picking an anchor thats one size larger than the tables recommend rather than one size smaller. It also means monitoring weather forecasts and making sure that your cruise itinerary offers anchorages in keeping with the conditions at hand as well as those that will be in play a few days ahead.

Beware of test data from sandbox-like substrates that put anchors through utopian evaluations. In heavy weather, loads do not increase in linear fashion. Exponential spikes and sharp changes in direction of pull are to be expected, and the result is a destabilizing lever-like sideways pull on the anchor shank. This force tends to twist the fluke, lifting one side higher and lessening the holding power. The orographic effect of a steep-sided cove can cause williwaws (radically shifting gusts) and is another test of how well an anchor can cope with shank twist.

Bottom line: Get to know the traits of the anchor you choose and know when its time to double up. 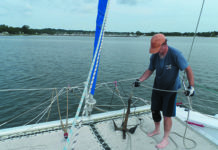 Tips on Anchoring In Mud 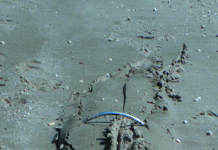 Taking Our Test Anchors Out for a Wiggle-walk 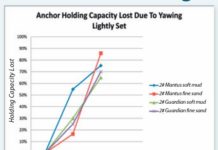