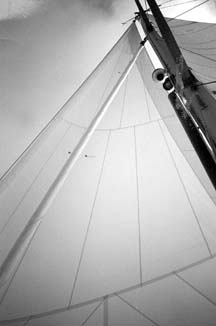 PS readers sometimes comment on our seemingly profligate ways: trying one thing, getting rid of it if it doesn’t perform perfectly, replacing with something else, repeating the cycle. This criticism fails to recognize the manner in which we use our boat.

Calypso is a Practical Sailor test platform. As such, we are never satisfied with things the way they are. Instead, we experiment, discard, and replace in a manner that is sometimes costly and often unnecessary. Our goal is to save other cruisers money, not necessarily to do things that are the most cost-effective for us. In fact, using our boat as a test bed—and keeping it in top condition—probably doubles the cost of our cruising.

A perfect example is the recent replacement of almost our entire sail inventory in New Zealand.

Calypso’s original Doyle inventory was built several years before her launch, in part because we thought the boat was going to be finished years before it actually hit the water. Our relatively large (137%) roller reefing genoa was built in the belief that we would see a lot of light air in our trip around the world, when the additional sail area would pay off.

The fairly heavy, flat mainsail was intended to be bulletproof, rather than powerful. Likewise, the small, hank-on staysail was designed to be flat and strong, our heavy-weather headsail.

Both the rig and our needs have evolved significantly over three years and almost 15,000 miles of ocean sailing, and our original sails, although still in reasonable condition, no longer suit our sailing style.

The big, low-cut headsail simply proved to be too large in most conditions, and was usually used in a partially reefed configuration. In common with reefing headsails in general, it had poor shape when reefed, with the draft too far aft either for effective upwind sailing or good helm balance.

The small staysail was re-cut even smaller when we switched to a reefing inner forestay two years ago. The shape of that sail was altered so drastically during this re-cut that it really was pretty useless.

The mainsail held up well, with only some minor chafing at the batten pockets and the reef points. Its flat shape proved to be satisfactory, but contributed to our helm balance problems. I should stress that these sails were designed, built, and modified according to my specifications. Both sail design and cruising sail technology have evolved significantly in the years since these sails were built, and my own understanding of what constitutes a good cruising sail has changed as well.

During our sojourn in New Zealand, we went to Chris “Curly” Salthouse of North Sails, New Zealand for a new inventory.

There is a story behind this particular matchup. During the 1997-1998 Whitbread race stopover in Brazil, I had told Curly, sailmaker and crew on a Whitbread 60, that I was sailing my own boat to New Zealand for the America’s Cup. “Come see us at North if you make it,” he joked, “and we’ll take care of you.” Sure enough, two years later I was knocking on his door for a new suit of sails.

Ironically, we had met Salthouse’s father-in-law on his cruising boat in Tahiti six months earlier. He and his wife were wrapping up a five-year circumnavigation on a fast 54′ sloop that he had designed and built in New Zealand. The serious cruising community is indeed a very small place.

A New Genoa
While Dacron is still the preferred sailcloth for most cruisers, we decided that the additional shape stability of a laminated fabric made sense for an all-purpose cruising headsail. At North’s recommendation, we chose their NorLam Mylar/polyester laminate, rather than the more expensive Spectra SR laminate. The Spectra SR laminate is stronger and more dimensionally stable for a given weight, but is significantly more expensive.

Because the new headsail is just a little over 500 sq. ft. in size, North suggested that the additional cost of the Spectra sail was not justified. In effect, he was saying that the extra strength was not needed in a small sail.

Our old genoa was a low-cut, 600-sq. ft. Dacron sail. Our new genoa is more of a hybrid sail, with a clew about 6′ off the deck. This higher clew helps equalize the tension on the sail when it is reefed, giving a better all-around shape.

The radial panel layout of the new sail has resulted in a dramatic improvement in shape compared to our old sail. The new sail has a fairly full entry and a straight exit, more like the shape of a racing sail. The additional stability of the laminated fabric yields a good shape throughout the sail’s wind range.

We expected a loss of performance in light air, both upwind and downwind, but haven’t seen it. The only time we think there might be a slight loss is when close-reaching in light air, but it’s a small price to pay. Upwind, it’s like night and day. The boat has absolutely come alive.

Downwind, our 20′ spinnaker pole controls how much headsail can be effectively poled-out. Even with the old, larger headsail, we had only a little more projected area downwind than with the new, smaller sail.

North has a variety of luff options for reefing headsails. We chose Rope Luff, a tapered bundle of Spectra ropes sewn inside a Dacron luff sleeve, rather than the more conventional foam luff padding. While this arrangement probably has more drag in light air, it seems to control partially reefed shapes better than our old foam luff, because it does not compress significantly under load.

The smaller overlap of the new sail—115% as opposed to 137% for the old sail—eliminates the need for spreader patches, at least for the lower part of the sail. We may add patches for the upper spreaders, but have not felt it necessary so far.

The higher clew of this sail makes it much more forgiving of errors in jib lead position as the sail is reefed, a big plus. The fact that the sail is smaller has also made it a little easier to reef, a significant bonus.

Mainsail
Our old mainsail was a conventional, full-batten cruising mainsail. The new main is different.

The new sail is slightly larger. We are constrained in the amount of roach the sail can have by our long boom, which places the leech very close to the backstays. In fact, both our old and new mains had to be re-cut to keep them from fouling the backstays, since sailmakers cannot believe how little room there really is.

We re-used the old Battslide luff fittings, as they were still in good shape, if looking a little ratty. The new main has externally adjustable batten tension for fine-tuning shape. The new full-length battens are pultruded fiberglass, and are substantially stiffer than the old flat fiberglass battens. Batten pockets are protected by a chafing strip where they come into contact with the aft lower shrouds when sailing off the wind.

We went with a loose-footed main. Coupled with our custom Harken outhaul car, fabricated by Metalmast when the rig was built, this gives us much better shape in the lower part of the sail than a captive foot.

The new sail is very easy to power up in light air, with a much fuller shape than our old sail. We primarily flatten the sail with outhaul tension as the wind increases, but also had a Cunningham fitting installed in the luff if it proves necessary to flatten things even more.

The leech line of the new main dead-ends at the clew, then runs up through a block at the head of the sail, then down the luff. This new arrangement is infinitely easier to adjust either upwind or downwind, with no more precarious perching on the rail while trying to calm a fluttering leech.

There is no headboard. North suggested 8.8-oz. Dacron for the sail, and we had it triple stitched with UV-resistant thread as a precaution.

Staysail
Our new staysail is radically different from the old one. At just under 150 sq. ft., it is similar in size to the old sail as originally built, but is quite different in shape. The new sail, of 8.8-oz. Dacron, is longer on the foot than the old sail, with a higher clew. This allows it to sheet farther aft on the staysail track, and reduces the necessity of shifting the lead if the sail is reefed.

Yes, this new sail is reefable. It is a full-size ORC (Offshore Racing Council) storm headsail for our rig dimensions, but is larger than would be desirable for winds much over 40 knots. Fitted to an oversized Furlex system that is suited for a genoa of about 800 sq. ft., we are not concerned with the strength of this setup in very heavy going.

The old staysail was very flat, which is desirable in heavy air. The new sail is cut more with the shape of a racing #3 genoa, with substantially more shape. The fact that we can sail effectively upwind with this sail in lighter winds has radically altered the way we sail the boat.

Now, it’s full main and genoa to about 20 knots. Then, a small roll in the headsail, or switch directly to the staysail if it looks like the wind might continue to build but the seas are still flat. The mainsail stays unreefed to about 22 knots, and the second reef goes in at about 27 knots. With a smaller genoa and a more powerful staysail, we have much more flexibility and power in the middle wind ranges. The staysail gets much more use as a headsail, thanks to its shape.

We also have re-tuned the rig, substantially increasing the pre-bend by carrying much greater tension on the inner forestay and forward lower shrouds, and less tension on the aft lowers. Coupled with more running backstay tension in heavier air, we go upwind in a breeze much, much better.

The new main is easily flattened, so we have no balance problems as the breeze increases.

Improved balance allows us to sail the boat more aggressively, because we do not feel so overpowered as the breeze comes on. No longer do we struggle to balance the boat and keep her on her feet.

All these sails were designed by Burns Fallow of North Sails, New Zealand. Not coincidentally, he also designed the winning North mainsails and headsails for Team New Zealand in the recent America’s Cup.

Other Changes
We also had an entire horizontal panel removed from our North Gennaker. This sail was too long in the luff, too big, and too difficult to use. We have yet to experience suitable conditions in which to give the altered sail a real test.

We replaced our polyester genoa halyard with one of low-stretch Vectran, the same material used for sheets and halyards on many America’s Cup boats. We replaced the main halyard, staysail halyard, spinnaker guys, and headsail furling lines with low-stretch Spectra, which is substantially cheaper in New Zealand than in the US. The old Dacron running rigging was still usable but getting very stiff and tired in spots.

But the biggest improvement has been the new sails. And what did these wonderful new sails cost? Thanks to the strong US dollar, the sails were roughly half the cost of the same sails in the US. With another 15,000 miles to sail over the next two years, I’d call this a pretty practical choice.