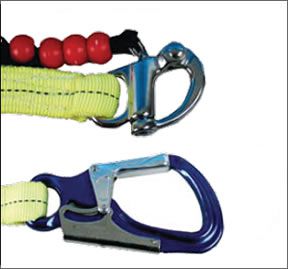 Theres a reason why we recommend safety tethers-the umbilical cords that connect the jacklines on our boats to the harnesses on our bodies-be 6 feet long or shorter. Getting dragged behind a boat, even at the sedate speed of 4 knots, can easily drown a person. Unless someone is on hand to haul you on board, survival relies on a superhuman burst of adrenaline.

Though rare, there have been some highly publicized deaths involving harnesses. The story of Harvey Shalsky, a sailor in the 1999 Double-handed Farallones Race, is familiar to most racers. Shalsky, racing with longtime partner Mark Van Selst, drowned while tethered to his J/29 White Lightning. Van Selst was unable to slow the boat or haul his partner in, and eventually cut loose Shalsky (who was by then unconscious) so that following boats could recover him.

The hazards associated with a tether that cannot be easily released under load prompted the International Sailing Federation (ISAF, the council responsible for regulating offshore sailing races) to recommend this feature in tether designs. It is not a requirement, only a recommendation, and ISAF does not stipulate what method should be used for the release.

The standard clip used by most makers for this purpose is a hinged snap shackle. The snap shackle, which features a spring loaded plunger pin, will release easily under no load and light loads, but it becomes progressively harder to release as the load increases. Usually, there is a lanyard attached to the release pin to make it easier to grab and pull (see photos below), but these are hard to use under the loads one could expect in a man-overboard incident.

During our on-the-water evaluation of inflatable PFD/harness combos for our August 2008 article, testers who were pulled at less than 4 knots were able to successfully release tethers with snap shackles only 50 percent of the time.

Some makers question whether the snap-shackle is the right attachment method for a tether. A clip that releases easily, they say, contradicts its primary purpose, which is to resist opening when the body, harness, and tether are being bumped across the deck by a wave.

So how do you make a tether thats easy to release but wont release accidentally? The engineers at Spinlock pondered this problem and came up with two new lines of tethers-classic and race-neither of which use snap shackles.

They also developed a special S-cutter Safety Knife ($24) that can be fixed to the safety harness and kept at the ready to slice the tether if needed. The hook-shaped tool stores in a small pouch that will fit on most harnesses or harness/PFDs. A lanyard keeps it close at hand if it gets dropped. It is extremely sharp, and the cutting blade is protected with a soft wax shell that easily breaks away during cutting.

“It is not a substitute for a good knife” explained Myles Uren, who oversees Spinlocks Deckwear line. “We encourage sailors to always have a sharp knife handy for an emergency. This is a back-up.”

For the jackline-end of the tethers, Spinlock has opted for the Gibb-style dual-action hook, an excellent piece of hardware that locks securely and is easy to open. At the harness end, users can choose either another Gibb-style hook or a soft loop that can be tied to the harness with a cow hitch. (To tie a cow hitch, also called a larks head or girth hitch, simply pass the soft loop through the harness D-ring and then pull the boat end of the tether through the soft loop.) Those who opt for the soft loop can buy a separate Gibb hook and cow-hitch it in as needed. The Gibb hook does not release under load, but is otherwise easy to unhook. The soft loop minimizes weight and any clanking at the harness-particularly when combined with Spinlocks harness, which uses a high-tech fiber strop instead of the conventional D-ring for tether attachment.

The main difference between Spinlocks classic and race lines of tethers (priced from $90 to $160) is that the race harnesses feature a lighter version of the Gibb-style hook and narrower webbing, The race tethers total weight of 13 ounces is about 2 ounces lighter than the classic tether. The tethers in each line comes in either the two-leg style, which allows the wearer to stay clipped in even when he is changing fixed clip-in points, or a single leg (with or without elastic). One of the tethers in the Y-shaped dual-tether has sewn-in elastic to minimize the amount of slack.

The tethers, clips, and hardware are all top-of-the-line and meet all the ISAF standards, including contrasting stitching for easy inspection, an overall length of less than 6 feet, and a sewn-in overload indicator. If you subscribe to the no-snap-hook philosophy, these tethers are as good as, if not better than, our favorite tethers from the January 2007 test.

The well-made Spinlock tether with a Gibb hook at the harness end is a good option for those who worry about snap shackle. However, based on historical evidence, we cannot recommend a tether that must be cut to be released in an emergency. The 1998 Sydney-Hobart race (http://www.ussailing.org/safety/Studies/1998_sydney_hobart.htm) is worth reading about before committing to the cow hitch. One possible lighter option is the Kong hook but watch for corrosion.

The S-cutter would make a fine addition to any harness, but it does not take the place of a sharp knife. We practiced cutting webbing with it in the water and were impressed with the cutters keen edge but it is small to handle. A sharp knife with a lanyard is an essential piece of deckwear. In a worst-case scenario, when you need to cut free of your tether under a high load, a swipe of a good knife can be more effective than any cutter, hook, or clip weve tried to date.