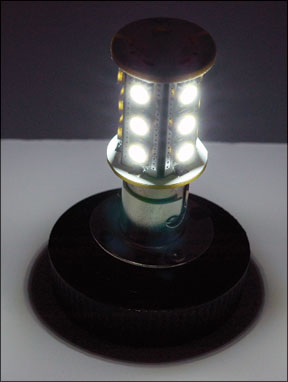 When it comes to navigation lights aboard sailboats, brighter is definitely better. And our latest tests of LED nav lights proved that more light can be made with less energy. In fact, we found that replacing a conventional incandescent bulb with a light-emitting diode (LED) of similar luminosity can result in up to a 90-percent savings in energy consumed over a given period of time.

For this review, we narrowed the test field and focused solely on LED tri-color navigation lights (sidelights and a stern light combined in a single fixture) because of the under-sail connotation. They are most often used when the engine is off and the alternator(s) is providing no energy boost to the battery bank. This is when miserly current consumption is most appreciated.

LED lights come in all sizes and shapes, and it has been their monumental improvement in efficiency that has made the technology so appealing to energy-constrained sailors.

In the past, the most popular means of meeting the U.S. Coast Guard’s navigation light requirements for boats under 65 feet (see “Nav Light Requirements,” below) was to use an Aqua Signal Series 40 tri-color lamp housing with its long-filament incandescent bulb. Its 25-watt energy appetite not only puts a significant load on the house battery bank, but it requires a heavier-gauge wire be run up the spar in order to avoid an energy-robbing voltage drop. Swapping out the incandescent bulb for an LED drops power consumption significantly and yields just as bright of a light. During a 10-hour night sail, this results in reducing current consumption from about 20 amp-hours down to a scan’t 2 amp-hours. This savings adds up, and the extra cost of the LED bulb or light will pay for itself in longevity and energy savings.

Skipping all the esoteric physics and getting down to basics leaves us with one important concept to grasp: By passing a current through certain semiconductors (materials with only a few electron holes), the electron flow instigates photon release—or more simply put, light energy is emitted. Modern LEDs comprise an anode (+) and cathode (-) that meet in a tiny cup-like reflector that contains an “n” and a “p” layer of semiconductor material.

In order to achieve white or colored light, phosphor coatings are used. Another significant breakthrough was the prism-like lens and epoxy-sealed cavity that bundles up many of these semiconductors. The resulting “bulb” reflects and refracts the light energy produced, delivering a color-controlled beam. The plasma-like brilliance of a single-source light creates lens and reflector challenges that each light manufacturer has to deal

with. Some makers shape a single beam with lens elements while others use an array of multiple smaller LEDs.

Each of the six LED tri-color masthead lights we tested for this report took a different approach to implementing the LED technology. The test field included three LED lanterns and three LED bulbs.

From Orca Green Marine (OGM), maker of the top choice among tri-colors in the 2005 Practical Sailor test, we reviewed the latest USCG 2-nautical-mile approved tri-color. The other tested lanterns were self-contained tri-color/anchor light combos from Signal Mate and Lopolight.

Among the bulbs we tested was the Lunasea, a sealed, waterproof LED lamp comprising four green, six red, and six white LEDs. From the LED Shop in Queensland, Australia, we tested the Bay15D white LED bulb with 15 diodes. The supplier recommends its use as a low-consumption (2 watts vs. 25 watts) replacement bulb for the Aqua Signal 40 incandescent. The second sealed bulb we tested was from Dr. LED, and it is third-party certified to U.S. Coast Guard standards.

Boat owners who don’t already have a masthead tri-color light, or who plan to replace an old one—hardware and all—would do well to consider an LED lantern.

The well-sealed, nicely machined housing and large lenses keep the LEDs in direct line of sight, regardless of heel or the viewer’s proximity. Hard, anodized endcaps and Lexan outer lens elements form a tough, water-tight seal. Its internal

electronic components are potted in a dielectric sealant, and the lantern comes with a well-sealed pigtail connector.

The manufacturer claims a 50,000-hour full brightness LED life and offers a two-year warranty on the $340 lantern.

Testers’ main concern that arose during testing was that the OGM lantern produced the most RFI of all the gear we tested. Moving the handheld VHF radio to within 14 inches of the light obliterated radio reception.

Bottom line: The OGM lantern is the least expensive in its category, and it proved to be a well-made light. However, its RFI test results held it back.

This expensive, well-designed, and carefully manufactured LED tri-color/anchor light offers a multiple diode approach to illuminating each sector of coverage. The lamp’s geometry focuses individual LEDs in narrower beams and uses 36 to cover each colored zone and 44 in the white zone. In addition to adding redundancy with circuitry that allows individual diodes to fail without taking out the entire cluster, the design eliminated the hotspot inherent in tri-color lights that use single-point light sources for each sector.

Its current consumption is a tiny bit more than the most energy efficient in this group, but the value of having the light continue to work even if one or more diodes give up the ghost is a big plus.

At $689, the Lopolight was the most expensive product of all those we tested, but it also had the least RFI. It comes with a five-year warranty.

Bottom line: If quality construction and superior performance are your priorities—and cost isn’t a concern—the Lopolight will fit the bill. It gets the nod as Practical Sailor’s Best Choice.

Signal Mate products are designed and manufactured by Maryland-based Kimberlite Assemblers Inc. The company sent us a pre-production version of its 2-nautical-mile tri-color lantern for testing.

The searing bright lantern scored high marks for energy efficiency. Its 0.3 amp draw at 12 volts DC compared to some of the more expensive lanterns.

The Signal Mate incorporates a finned alloy base that functions

as a heat sink and houses the driver and diodes within a polycarbonate cylindrical tube. Its endcaps and electronics are sealed and bedded in Dow Tough Gel.

Its cylindrical shape makes it well suited for masthead mounting. The light output did not appear hampered at all by the unit’s comparably small lenses, even at varying angles of heel.

The design, with a single light source per sector, created a white hotspot, but from 50 to 100 yards away, it was undetectable. Hotspots, a bright white spot that occurs when a single-point white light source illuminates a colored faceted lens, are common to this design.

Just before going to press with this review, Signal Mate sent us its new production version of this lamp. Like the pre-production unit, the LED circuitry is enclosed in a polycarbonate cylinder, but it now incorporates O-ring seals and 3M 5200 adhesive to better cope with thermal expansion and contraction. Heat dissipation and RFI suppression have been improved, and the overall fit and finish have been raised a notch. The light is certified to USCG and American Boat and Yacht Council (ABYC)-16 standards.

Bottom line: The $359 Signal Mate tri-color is a cost-effective option with a good five-year warranty, and the new version boasts some necessary improvements.

The new breed of LED bulbs can add efficiency to those old Aqua Signal, Hella, and Perko incandescent nav lights that have been serving boats for decades. These plug-and-play conversions from incandescent to much more efficient LED technology are capturing market share, and the degree of this success has inspired Aqua Signal to come out with its own single-diode LED light and a new line of LED products. For those with older lamps such as the venerable Aqua Signal 40 tri-color, the following three bulb options represent good examples of what’s available in the realm of LED conversions.

The Dr. LED Polar Star 40 replacement bulb for the Aqua Signal 40 lantern comes with an interesting note. According to the Seattle firm, “a white LED should not be used behind colored lenses.” And to that end, its LED replacement bulb has three distinct color-enhanced sectors indigenous to the bulb itself. These are not stand-alone red, green, and white sectors, but instead are color-enhancing segments that ensure that red is red and green is a bright and deep shade of green. This reduced the bulb’s hotspot.

The bulb is designed in the U.S., made in China, and meets the 2-nautical-mile visibility, chromaticity, and other demands of the ABYC/USCG standards. It was the lowest current-consuming light in our test (0.1 amps), and though not the

brightest, it was visible and color recognizable at the 2-mile range.

Bottom line: Middle of the pack price-wise, this $50 current miser gets a Practical Sailor Budget Buy among LED bulbs for conversions.

This well-sealed, wedge shaped, waterproof bulb uses separate LEDs for each color zone. The red sector held six LEDs, and the green four. Light-meter readings indicated that the red sector was a bit brighter than the green sector during tests. At distances beyond 100 yards, the discrepancy was not noticeable visually. Both segments could be seen at the 2-nautical-mile range.

This bulb seemed to only need a clear housing because of the excellent chromaticity match, but without being placed in a tri-lens housing, it had a rather large overlap of red and green. We noted that the red and green (bow-on aspect) covered an arc of more than 20 degrees. But by placing the tri-color lens over the bulb, the overlap was brought into an acceptable 10-degree range, creating a bright, very distinguishable tri-color light.

The Lunasea bulb was the only one in its group with the ability to keep shining even if one of the multiple diodes failed.

Bottom line: One of the brightest LEDs tested, the Lunasea light gets the Practical Sailor Recommended pick among bulbs for its top performance and lifetime warranty, the only test product to offer one.

Distributed by the Australia-based LED Shop, the white BAY-15D bulb we tested was a cluster of 15 diodes in pentagonal array of three vertical diodes per segment. This bright-white light makes a superb anchor light, and the LED Shop also recommends it as a replacement bulb for the Aqua Signal Series 40 tri-color light.

In our testing, it provided a bright red and green sector, but its colors were not as saturated as the color-specific bulbs by Dr. LED and Lunasea.

Testers’ biggest concern was the fact the bulb isn’t properly sealed. This does afford better heat dissipation, a key factor in LED longevity, but we prefer sealed bulbs.

minimal RFI make it a bargain as an anchor light bulb.

Bottom line: Although inexpensive and a good performer, the BAY-15D was held back by its lack of a good seal.