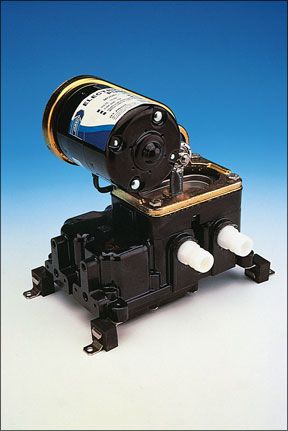 My boat has an ITT/Jabsco 36600 diaphragm bilge pump that does not sit in the bilge and is rebuildable. With an 8-foot head on the pump installation, I think this type of pump may be a better type for me than the electric centrifugal pumps you reviewed in the September 2010 issue—although they are more expensive.

You did not include any diaphragm pumps in your review. Was there a reason? Do you plan to test this type of pump and perhaps compare them to the ones reported on in the September article? Any information on diaphragm pumps versus centrifugal pumps would be greatly appreciated.

The old Peters-and-Russel-design diaphragm bilge pumps such as yours have been used for decades. These PAR (for Peters and Russel) pumps have been generally considered reliable, but some models comprise dissimilar metals, making them prone to corrosion in a saltwater environment. The Oct. 1, 1998 issue of Practical Sailor entombed an Edson diaphragm pump in our Gear Graveyard due to corrosion. Some swear by the mostly plastic models, but even these need to be inspected annually.

Compared to conventional centrifugal pumps, diaphragm pumps have some cons worth noting. Because they have more moving parts, they need to be monitored more closely. In addition, a pre-strainer is needed because solids can force the check valves to remain open, causing reduced efficiency or a failure to prime. Diaphragm pumps have more components that can fail, but as you mentioned, unlike most centrifugal pumps, they can be rebuilt. So be sure to have key parts such as the belt drive, check valves, and diaphragm on board. Another shortcoming is that diaphragm pumps require more power, and have lower flow rates.

Because they are self-priming, you can pump your bilge almost completely dry with a diaphragm pump. This is usually impossible with a centrifugal pump without installing a check valve, which can restrict the flow rate significantly. Also, you can install diaphragm pumps high above the bilge, reducing the chance of any stray DC current in the bilge—a particular concern for owners of metal boats. Sailing writer Steve Dashew reported that he used three PAR pumps on his 78-foot aluminum sailboat Beowulf and was quite happy with their performance.

Because of the “high-maintenance” nature of diaphragm pumps, as compared to centrifugal bilge pumps, we would recommend pairing a diaphragm pump with a centrifugal pump, or at least have a second, backup diaphragm pump. Murphy’s Law dictates that the strainer will clog or a belt will fail right when you need it most.

If you like a dry bilge, the PAR pump could be your lowest mounted pump; the centrifugal pump could be installed slightly higher and be used to clear the bilge when a higher flow-rate is desired.