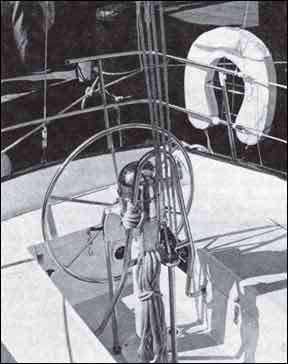 The mainsail is a big part of the motive power of almost every sailboat. The art of mainsail control, however, is a relatively modern one. One tool that greatly facilitates mainsail control is the traveler.

Traditionally, the mainsheet traveler was a heavy bronze or iron rod that allowed some control over the position of the boom relative to the centerline of the boat. In heavy air, the main could be eased down to leeward without easing the sheet, helping to keep the boat on her feet with the main still sheeted down.

Compared to modern travelers this is a primitive system, but it can be made to work.

Without some form of traveler, the main is frequently sheeted to a single point on the boat’s centerline. When the sheet is eased, the boom tends to rise as well as move to leeward. To offset the rise in the boom, a yang is fitted, which tends to hold the boom down, albeit at the expense of adding considerable load to the boom. In extreme cases, the entire sheeting load of the boom is borne by the yang in the attempt to keep the boom low while the sheet is eased. A broken boom is sometimes the result.

The next stage in mainsail control is a traveler made from a section of T-track, just like that used for headsail leads. A car similar to the slider used for a genoa lead is used on the track, and adjustable stops allow the primary sheeting position to be adjusted to windward or leeward as necessary.

However, the genoa-type slider is likely to be under much greater load than when used in headsail applications, making the positioning of the slider when the mainsheet is under load quite difficult. The friction is simply too great.

The solution is the modern ball bearing or roller bearing traveler. By reducing friction between the car and the track, bearings make it possible to adjust the position of the lead under the heaviest loads. The traveler car is fitted with control lines on both ends to allow constant adjust­ment of the lead position if necessary. It’s far easier to depower the main in puffy conditions by dropping the traveler down to leeward momentarily than it is to ease the sheet, then struggle to retrim it.

The position of the traveler assembly is problematic, Almost anywhere in the cockpit, it will interfere with either movement through the cockpit — if for example, it bridges the seats just forward of the helmsperson — or with seating in the cockpit.

With the short boom of a modern rig, the bridgedeck at the forward end of the cockpit is frequently ideal since it provides a strong mounting position close to the end of the boom for maximum leverage. However, this locationcan mess up the seating for those times spent relaxing in the cockpit in port.

The aft end of the cockpit is usually another likely loca­tion, but the main boom often ends several feet forward of this position. This means that the sheet leads forward at an awkward angle, reducing leverage, and perhaps interfer­ing with the person at the helm.

Mounting the traveler atop the cabin house has both advantages and disadvantages. The cockpit is kept clear, a real advantage. However, a forward position usually means mid-boom sheeting. The disadvantages of mid- boom sheeting can be significant. In order to exert the same trimming force on the sail, more force is required on the mainsheet. The tendency of the leech to pull the end of the boom upward is not directly offset. Instead, the downward force is exerted in the middle of the boom. The resulting lever arm between the two loads tends to bend the boom, and can break it if the boom section is not larger than that of a comparable end-of-boom sheeting arrangement.

This problem is usually offset by spreading mainsheet blocks along the boom, which unfortunately reduces their efficiency.

We have seen travelers bridging the middle of the main companionway. The disadvantage of this will become obvious the first time you crack your head.

Almost inevitably, a mid-boom traveler must bridge the companionway slide in its forward position, or the seahood protecting it. This usually means a long unsupported span of traveler, necessitating a strong support system. This also can put substantial point loading on the top of the cabin trunk, which must be suitably reinforced.

The traveler should be far enough forward to allow the fitting of a companionway dodger. You may not want one now, but someone who owns your boat someday will. In the best arrangement, a wood or fiberglass breakwater is part of the cabin top aft of the traveler. Try to minimize the number of lines piercing the breakwater. Even with a dodger up, holes in the breakwater will let a lot of water through if you take a solid green one over the bow.

Be sure that the position of the aftermost boom block doesn’t interfere with the dodger. Even though the face of the dodger slopes aft, the mainsheet could chafe on the dodger if not properly led.

If you’re thinking of putting a traveler aboard, here are examples – both good and bad – of solutions to the problem. 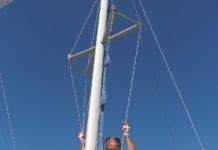 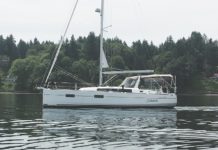 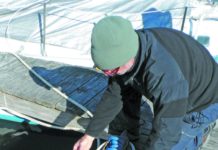