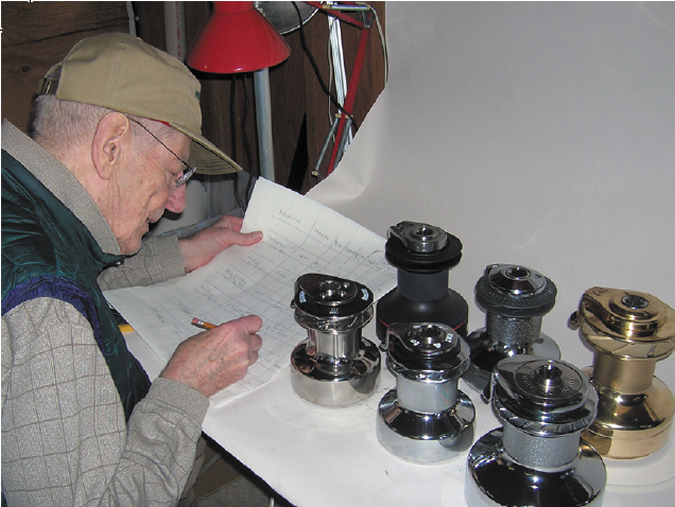 Part 2 of our winch test this month brought back fond memories of the man who helped steer me into my position as PSs skipper, the late Dale Nouse, our former executive editor who died of cancer less than a year after I took over as editor in 2005. Dale was in charge of a winch test that year. He passed away a few months later, at the age of 82-working nearly to his last day after 13 years with Practical Sailor.

At the time of the test, no one-not even Dale- knew how ill he was. Former PS editor Doug Logan was helping with the testing, driving each day from Connecticut to Dales house in Middleton, R.I. Doug would do the grinding while Dale checked the load cells and jotted down numbers. The test, like countless others before it, was carried out in Dales basement.

Part office, part workshop, Dales basement was a tinkerers dream. The neatly organized drawers and shelves were filled with equipment for calculating all the measurable forces that affect a sailor. He had, in the surf-speak of 80s icon Jeff Spicoli, the ultimate set of tools.

I remember that halfway through the test, Doug called me with an update on their progress. Exhausting work, he had said. We can only test one or two winches a day.

The winch comparison data table that Dale created for that report is still here in my office. His results were always hand-lettered on 48-inch-wide drafting paper cut from 150-foot rolls. The grid of columns and rows were penciled using a T-square; each cell entry hand-written in remarkable penmanship. I bring it out occasionally to remind myself that theres still a bit of art in the work we do and that the only shortcuts in this business lead to places we don’t want to go.

Dales data tables, like his work and his writing, reflected the effort of someone who cared deeply about the importance of his work. Recreational sailing is just that: re-creation, he once told me, implying that when we sail, we re-create our better selves.

It was perhaps fitting that Dale died shortly after the winch test was published; they were the perfect products for a man of his sensibility-beautiful pieces of hardware, eminently useful, and durable as hell.

The winches that Dale tested in 2006 are being gradually supplanted by newer models in which metal components have been replaced with plastic. Dale avidly raced and cruised, so he appreciated the sailors contradictory requirements that Product X be as light as possible but never break or fail. I imagine hed be a bit skeptical of the new stuff. And Im sure his observations would include his characteristic sense of humor, as it was in his last report.

Their [winches] only negative is their proclivity to induce fidgety idlers to rotate them mindlessly, just to hear the pawls ratchet. These idlers usually can be broken of this annoying habit by shouting, Winch-clicker! Winch-clicker!! Winch-clicker!!! If that fails, they generally are put ashore . . .

I confess that sometimes when Im alone at night in our workshop here in Florida, I give the winch on our workbench a twist. The sound conjures an image of Dale setting up his dynamometer at the far end of the bench, getting ready to find the flaws in the next best thing. He casts an unreadable glance my way-as if trying to decide whether I deserve his faint approval or scorn. Winch-clicker, winch-clicker, winch-clicker . . .