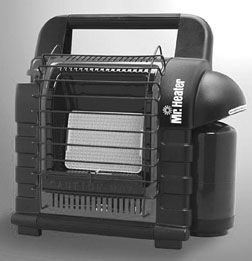 After a test report was published in the Jan. 1, 2005 issue on eight small portable electric heaters, a number of readers contacted Practical Sailor.

Several took issue with the manner in which the heat output of the eight heaters was measured. (It was done in two ways: by measuring the temperature of the heat as it emerged from the heaters and again one foot away; and the maximum velocity of the air one foot from the heater.)

Basically, what was lacking in PS’s testing routine was a way to determine how well a given heater would warm up a given volume of air. A tiny heater, like a candle, can produce very high temperatures close up, but it puts out so little hot air that it’s useless as a space heater.

Put simply, a heater might warm the interior of a very small cabin, but be far less effective in a cabin with two or three times the volume.

John A. Wilson, a professional engineer who lives in Dover, NH, put the case succinctly: “The electrical energy that goes into any electric heater is converted totally to the heat that will be obtained from the device…no more and no less.” Professor Wilson told us that: “The information provided in the ‘watts’ column of the report is the only data indicative of heat output.”

It might, perhaps, have been better had PS calculated the volume of air in a cabin of a hypothetical 30-foot sailboat and estimated what would happen to the temperature when subjected to the Btus produced by the watts consumed.

Even more readers contacted us to ask why propane heaters—the kind with small, screw-on gas canisters—were not tested, or even mentioned.Both Craig Hohm, of Philadelphia, PA, and Bob Eberwine, of San Pedro, CA, were among those who asked about the “Buddy” and “Mr. Buddy” propane heaters. From his e-mail note, it appears that Eberwine uses the “Buddy” heater aboard his boat.

The oxygen deprivation gadget is a simple flame, like a pilot light. When the flame burns low or goes out, it actuates a thermocouple and shuts off the propane supply. It works indoors, but when used outdoors it’s usually blown out by the wind.

The tip-over shut-off is usually a simple mercury switch, like those used in electrical wall switches.

The packaging for the “Buddy” heaters pronounces that they are recommended for “tents, cabins, RVs, hunting blinds, workshops, porches, patios, garages, barns, and fish shanties.” Because of the aforementioned safety controls, these heaters would seem ideal for boats. However, when PS contacted the Mr. Heater Corp., Cindy Hall, the marketing manager, told us, “They are not recommended for use on boats.” When pressed for the reasons behind that, she simply replied, “The propane.”

Clark Rawlston, of Detroit, MI, asked about the small Coleman propane heaters called Procat, Xtreme Cat, and Sportcat. The Procat, a new model ($74), is a very trim design with a small fan, powered by two “D” batteries. It puts out 3,000 Btus and runs for eight hours on a 16-oz. canister. That too would seem ideal for a small boat, no?

After several conversations with Coleman’s safety engineers at the company’s headquarters in Wichita, KS, PS got the same answer: “Not recommended for use aboard boats.”

There are many other small propane heaters on the market. However, not wanting to deal in apocrypha, PS quit looking and gave up the idea of testing propane heaters. As always, we’ll keep this subject open for reader comments regarding their views and experience. More information is available at websites like www.coleman.com or www.mrheater.com.

(By the way, the contact information listed in that aforementioned article for Holmes & Patton was incorrect. The toll-free number for Holmes Products is 800/284-3267.)