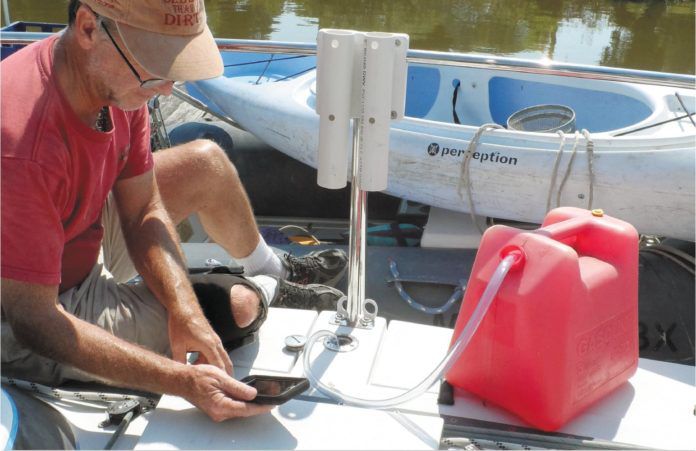 Fueling a boat has never been as easy as fueling a car. Spills-exacerbated by poorly designed fill pipes and vents-are common. The U.S. Environmental Protection Agency (EPA) has updated the fill and vent requirements on boats to prevent these spills, but they only apply to new gasoline-powered boats. New jerry cans designed to prevent spills and comply with new emission standards aren’t making things easier. Most are hard to control and slow during filling, spill prone, and break after limited use.

In search of solutions to this longstanding problem, Practical Sailor explored options to prevent spills at the fuel pump. We tested several products, others we watched in action, and a few we’ve had in use on our test boat for several seasons. Because the products performance can vary widely by fuel system design, we also interviewed regular users.

Most fuel tank vents lie below the topsides to prevent fumes from finding their way into the interior. This would work if a sufficiently high loop was provided to prevent splashes from spilling out, but this is seldom the case. Even worse is a vent that is invisible to the person manning the nozzle.

There are two types of vent-spill preventers: in-line traps that stop the fuel before it comes out and devices to catch it before it hits the water. The inline trap design is preferable, especially if your boat has a silica-gel filter installed in the vent line to prevent harmful vapors from escaping. A well-designed trap will keep the vent filter from being contaminated with fuel in the event of an overfill. PS readers will recall that tester Drew Frye found silica-gel fuel tank vent filters to be a more practical means of reducing harmful vapor emissions from boat fuel tank vents than the carbon filters recommended by the EPA. (See PS January 2013 online.)

This whistle from Green Marine Products is installed in the vent line so that when the tank is filling, escaping air sounds the whistle. As the fuel begins to splash against the vent fitting in the tank, the whistle is reduced to a warble, and as the fuel starts to fill the hoses, the whistle stops. We had one on our test boat for a season and found that the whistle didn’t always work (especially when filling slowly with a jerry can) and that the sound could be a nuisance when it did work.

Bottom line: The concept is intriguing, but a physical spill preventer makes more sense to us.

Made by Parker Filtration, a leading maker of diesel fuel filters, the LifeGuard LG100 three-stage separator is the most advanced vent-spill preventer we tested. Rated for 50 gallons per minute (gpm), it is designed to collapse foam and return it to the tank, as well as prevent surges from overfilled tanks. We’ve used one for years, and it has performed perfectly.

Parker also makes the LG50, which is rated for 20 gallons per minute, large enough for most sailors needs.

Bottom line: The LG100 is our Best Choice for prevention of vent spills.

Attwood, maker of a wide range of marine products, developed a simple fuel surge protector that has a positive shutoff to prevent overflow. It lacks the foam separation feature found in the LifeGuard, which means it does not need to be mounted high in the vent line, but it should be oriented vertically.

Users we interviewed gave it mixed reviews. The chief complaint was that it was overly sensitive and forced all the air to come out of the fill, resulting in blow-back and mist. The bonus is no maintenance.

Bottom line: The Attwood Surge Protector offers inexpensive and simple protection, but is not as effective as the LifeGuard.

The now-discontinued Davis No-Spill attaches to the hull with suction cups over the vent. The cups work only on vertical surfaces with plenty of clearance around the vent.

Bottom line: After watching boaters fiddle with this thing at the local fuel docks, we can see why it was discontinued.

It would be great if marine fuel pumps cut off reliably and if the fill pipes were designed to handle the minor backflow that is common. Sadly, this isn’t the case. We found only one gadget designed to limit the mess.

Introduced by Scandvik, a longstanding, Florida-based marine products company that serves a number of U.S. boatbuilders, the CleanWay inserts into the fill pipe, sealing it and the nozzle with rubber bushings. It worked exactly as designed during our test, containing any backflow every time we tried to overfill. (Fuel can expand in your tank, so it is best to avoid overfilling if you are not immediately going underway.)

The down side? It is harder to hear when the tank is nearly full, and you must have a vent control.

In 2001, the EPA adopted standards developed by the California Air Resources Board (CARB), requiring that portable fuel cans recover vapors by returning them to the can and that they have a no-spill feature. The new jerry cans are expensive, slow (1.2 to 2.2 gallons per minute in the 5-gallon size), spill prone, and fragile. The bottom line is we don’t trust any of them.

Funnels can help prevent spills with these new cans, but we didnt review funnels or filter funnels in this test. Our recommendation of the Mr. Funnel still holds (see PS September 2004 online). However, hefting a 5-gallon jerry can above a funnel is not helpful or practical in preventing spills. If you opt for a common funnel, make certain that it is conductive and rated for gasoline, even if you use only diesel. To prevent static discharge, the can nozzle must remain in contact with the funnel at all times.

Siphoning fuel makes the job easier, which is why we focus on siphons here.

Hopkins Tools FloTool (Model 10801) is what is known as a shaker siphon because the flow is started with a few vertical shakes. The claimed flow rate is 3.5 gallons per minute, but with the can sitting on the deck and the hose pushed 12 inches into the fill pipe, we averaged 2.7 gallons per minute. Thats comparable to CARB jerry cans, without the holding and dripping. For outboards, we preferred a handier 1-gallon non-CARB can, but with our test boats 25-gallon tank, the siphon quickly became our favorite transfer method.

Bottom line: The FloTool is our Best Choice, and in our view, every boat owner should have one-even if they plan on pouring.

The Marine Raider Siphon operates just like the squeeze-bulb sort supplied with external-tank outboard engines. It has a slightly larger check valve, but the flow is still slow, only 1.3 gallons per minute. We found it hard to prime when dry. It will be handy for filling small outboards with integral tanks, but we don’t see it being much help for bigger tanks.

Bottom line: Not our first choice for big fueling jobs.

Filling a boats fuel tank requires special care. Boats present fueling hazards that land-based vehicles do not-the most worrisome being that the boat is a confined space that can hold hazardous fumes. Spills are also a serious matter, creating both mess and significant financial liability. Be certain you know how much fuel you require and monitor the filling process closely. Your first line of defense should be to avoid filling beyond 90 percent of capacity.

Vent spills are best controlled by routing the fuel-tank vent line high and installing an anti-surge valve such as the LifeGuard LG100. Fill fittings with an integrated vent found on some newer boats are a valid solution when combined with an evaporative control venting system (which includes an anti-surge valve).

At the fuel dock, the CleanWay trap, though awkward, performed as advertised, eliminating mist and containing minor kick-back at the end of the fueling process- although the nozzle should always be tended.

The clear winner was the FloTool Shaker Siphon. It was surprisingly fast, safe, did not require holding the can, and best of all, it meant we didnt have to deal with any of the clunky CARB nozzles. Every boat should have one coiled away, just in case.

Ultimately, caution is still the watchword when fueling. Accidents are far too common for any boater to become complacent at the fuel dock.

Although many of the fuel-spill prevention products we tested were simply new versions of familiar devices, some took novel approaches to keeping waterways clean and keeping mess to a minimum.

Our favorite devices were the ones that were the easy to use, were ruggedly built, and of course, worked as advertised.

2. The FloTool Shaker Siphon proved to be the most practical tool for transferring fuel from a jerry can to the tank. The name comes from the vertical shaking motion used to get the flow started.

3. The Green Marine Warning Whistle sounds as air escapes from the vent. When the whistle stops warbling, you know you’ve gone too far. This concept intrigued us, but after using it for a season, we searched for a more effective alternative.

4. Using a squeeze bulb like the kind found on an outboard fuel line, the Marine Raider siphon got the job done with minimal mess, but the process was slower and not as clean as it was using the FloTool. 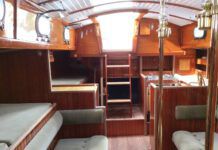