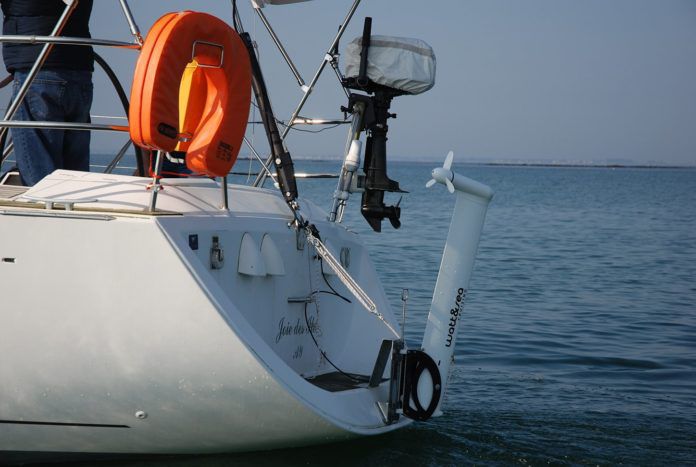 A few years ago, I noticed that 2 of the 10 cruising boats I saw docked in Bergen, Norway, had towed water generators, making me wonder whether the Scandinavians have had better luck with these devices than we have. In the October 2017 issue of Practical Sailor, offshore gurus John Neal and Amanda Swan Neal of Mahina Tiare Expeditions share their experience with these systems.

The units I saw in Bergen looked like they were the Aquair 100 made by the British manufacturer Ampair. In our article on Choosing a Wind Generator, we mention Ampair, and we describe its wind generator in greater detail our marine wind generator test (available only to subscribers). We have not yet had a chance to test the Aquair 100, but it operates in a similar way to the Hamilton Ferris unit. Both tow a small impeller that looks-and this is one of the problems-like a big fishing lure with propeller blades. As the impeller spins, it turns the generator fixed to the boats stern. Old-timers may remember how much the fish seemed to like those pricey impellers for the Walker Knot Log, even though they were painted black.

One thing I noticed in Bergen was that one of the towed water generators had what looked to be a homemade impeller, and it is quite probable that the original one was lost. This is one of several problems with towed water generators; they get tangled, fouled in weed, snagged, and lost-sometimes eaten by big fish or sharks. I suppose one reason there might be more of these units here in the north country is the waters don’t have as many surface-feeding pelagic species as we have in warmer climates.

Towing isn’t the only option, though. While I was in South Africa a few years ago, I spoke with the local representative for Duogen to try to arrange a test of this product, a combination wind and water generator. At the time, the company was fairly early in the product development, and I was not impressed with the fabrication. One thing I did like was the apparent ease (the key word is apparent, because I did not try this at sea) with which the Duogen deployed: It is suspended over the stern like an electric outboard. In its water-gen mode, it looked very similar to the Watt & Sea hydrogenerators that Practical Sailor contributor Dan Dickison examined during the Velux 5 Ocean Race. These are now available in a cruising version, but they are expensive units, and again we have not tested them.

All of these products have another problem in that they add drag underway. Some owners report speed losses of a quarter- to a half-knot. This isn’t a big deal if they can help keep the ships systems running on a long passage of the kind that John and Amanda routinely tackle on their offshore training sails aboard their Hallberg Rassy 46, Mahina Tiare III.

Call me a skeptic, but when I look at the prices for hydrogenerators and consider how much time they will actually be delivering power to the boat, I think there are much better ways to spend my money. If an efficient and convenient dual-purpose generator comes on the market, I may change my tune. But right now, I think solar, then wind still reign in the world of ship-board alternative energy.