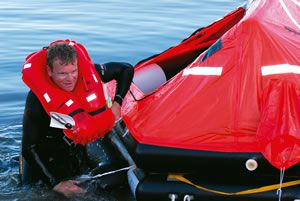 I am looking to place some folding padeyes on my boat for jacklines and tethers. The price range for stainless-steel padeyes is extreme, and the distinction between safe working load (SWL) and working load limit (WLL) is not easily understood-even though Im an engineer. It would be useful to know the consensus SWL/WLL recommendation for a jackline / tether application.

The SWL vs. WLL confusion is part semantics and part litigious. Safe working load is still used in the marine hardware realm, and most often, it is set at 50 percent of the breaking strength of a piece of gear. After several litigation fiascos over SWL ratings-and some pretty dramatic failures-working load limit became the nuanced replacement for SWL.

You noted that the Chinese no-name padeye is much less expensive than the Wichard padeye, with the same specs. The missing variable in your comparison is metallurgy, and whether or not the products will equally withstand the corrosion inherent in the marine environment. Much of our testing has shown Wichards stainless steel to be at the top of the anti-corrosion scale, and Chinese cast products are usually at the opposite end.

When it comes to hardware that may mean the difference between life and death, we don’t recommend seeking out the cheapest option.

Wichard, which tests its products, publishes its shackles break load values, and what the company calls a safe working limit, which is an actual tested value at which the product stops functioning, a limit that should not be exceeded. In the case of the padeye, the product is loaded until a permanent deformation occurs, and the folding bail no longer is able to fold flat, according to Wichards Vernon Hultzer. The WLL is typically a function of the breaking load, and this differential factor can vary from industry to industry and application.

Is there any training on life rafts? How can people be exposed to such training?

The International Sailing Federations (ISAF, www.sailing.org) two-day safety-at-sea courses have a life-raft training segment. In the past, these courses have been held at the U.S. Naval Academy in Annapolis, Md.; the Newport Cruising Club of America-sponsored Safety at Sea Seminar in Newport, R.I.; the U.S. Merchant Marine Academy at Kings Point in New York; and the State University of New York Maritime College.