In November 2010, Practical Sailor posted a Reader Workbench article written by subscriber Ed Mini of Mystic, Conn., on a do-it-yourself Wi-Fi booster/antenna assembled from parts ordered primarily from Data Alliance (www.data-alliance.net) and Home Depot (www.homedepot.com). The system did a good job of boosting the distance users could connect with onshore hotspots, and the cost was under $100, not counting labor. About a year later, PS tester Ron Dwelle decided to put together a similar system, but he used the components that commercial vendors use. Heres a rundown of his system, which has stood up well for three years.

Dwelles Wi-Fi booster used a Ubiquiti Bullet M2HP (about $100, eBay.com) for the transmitter/receiver, which makes up the guts of the system. He added to that an 8-dBi, omni-directional antenna ($30, electronics/ham-radio supply shop) and a stainless-steel, 1-14 clamp-on mount (about $18, BoaterBits, www.boaterbits.ca) to affix the antenna to the stern pushpit. System cabling was CAT5 Ethernet cable for outdoors use ($25) and an indoor CAT5 patch cord (a few bucks from a Radio Shack junk parts bin). Dwelle bought the Power over Ethernet (POE) injector, which feeds 12 volts to the Ethernet cable to power the system, for about $5 from a ham-radio supply shop. Capping off the setup was an el-cheapo, residential Wi-Fi Cisco router that could operate off of 12-volt power and a variety of PVC tubes, end-caps, glues, self-fusing silicone tapes, electrical connections, wire, etc. (all sourced from the Home Depot and our garage workbench).

The AirOS software that comes with the Ubiquiti Bullet is written by and for Ethernet techies. Ethernet techies do not speak or understand normal English. They expect you to understand terminology such as Ping Watchdog, Simple Network Management Protocol (SNMP), SSH, telnet servers, Network Time Protocol (NTP) client, Dynamic Domain Names System (DDNS), and device discovery. Fortunately for Dwelle, his sailing buddy is an avid ham-radio addict who was willing to talk him through the most-confusing aspects of setting up the system.

Making a water-resistant container for the Ubiquiti Bullet out of PVC pipe and end-caps is a lot more complicated than it should be, especially sealing the antenna attachment and the Ethernet outlet jacks. Fortunately, every time you botch up a piece of PVC pipe, youre only out a buck or two. And the Bullet is advertised as weatherproof.

Users access the operating software through an Internet browser, by typing in a string of numbers like 192.168.221.19. The software is not exactly intuitive. If you download and read the 64-page manual from Ubiquiti, and then read it again, and then buy lots of beers for your ham-radio friend, youll have no trouble setting up the system.

Once you figure out how to identify your areas Wi-Fi hotspots and to apply the appropriate settings, youre in business. The system works well; however, even after two years of use, we are still sometimes confused at the select and apply screens. We get there eventually, but it makes us truly appreciate the software provided by commercial makers such as Bitstorm.

If we included a charge for the time we spent making the system, valuing our time at the minimum wage, our homemade system cost us at least as much at the Bitstorm Bad Boy (www.bitstorm.com) or Rogue Wave system. But it was fun. And it works almost as well as the Bad Boy. 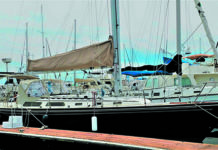 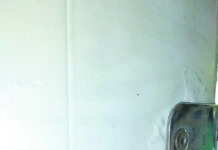 Tips on Painting Your Peeling Mast