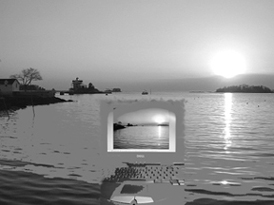 Here’s a letter and response we were going to run in Mailport this month, but we’ll run it in this space instead:

As I sit at the dock, reading the February 1 article on navigation software, I am compelled to comment on the last paragraph. You echo the software makers cautions about paper charts, and not relying on their software. You also recommend simple plotting tools and retention of learned navigation skills.

Let’s be practical. How long will the average boater continue to justify the expense for current paper charts? How many will take the time to practice their skills, assuming they ever learned them?

The future is here. The reality is that these software programs will lull even the most dedicated among us into dependence on their speed and ease of use.

Bill, you have a point, but we still have to fight the good fight. To us the issue isn’t even so much about safety as it is about missing out on real understanding and pleasure by not knowing and practicing those skills, which help us relate in a very practical way to real surroundings. Yes, it can take a minute or two to take a set of bearings or plot a vector triangle, but you learn something in the process, and you become a better mariner. Thats a steel fact, man.

Is one of the purposes of sailing to get away from the hubbub of life on land, or is it to bring the hubbub with us? Are we interested in making our lives afloat physically and mentally easier, or do we want to challenge ourselves a bit? And, assuming that people’s preferences fall at different places between those points, how much are we all influenced by the marketing people and the engineers who put a feature in a product just because they can? Certainly a lot of products that used to be considered extravagant are now de rigeur. Are these things actually making us happier afloat, or would many of us, in the long run, be better off without some of them? These are questions we’ve been wrestling with at boatshows in recent years. More and more of these shows are awash in high-tech, high-priced gear and gadgetry, much of it, to our minds, little but clever fluff. At the other end of the scale there are cheaper, but still overpriced gizmos and gadgets intended to make our sailing lives simpler by saving us labor and trouble. And our main question is this: After all our labor has been saved and our calculations done for us, what, actually, are we supposed to do out on the water?

We’re not “against” innovation and technology, and we’re not naive about it, so please don’t write us an angry letter accusing us of being Luddites. But since we’re under no obligation to push anyone’s gear, and we do have a commitment to try to help readers have a good time afloat, we can say this: Don’t let these companies drag you too far away from the wind, the water, your boat, and the friends and family who help you sail it.

AutoThinking
At every show the companies that make GPS receivers are mobbed (and PS editors are always part of that mob). This is now old technology, but it’s still amazing, and the hardware and software that presents it to eye and hand develops quickly and keeps the idea exciting. How can we resist spending money, not only on the latest receiver, but on all sorts of other instruments that can coat-tail on it? The information we can derive from a GPS receiver and an integrated instrument system is astounding. Then we can add a notebook computer with navigation software, radar interfaces, weather map overlays, and all sorts of other data, with little icons of our boats superimposed on top. Why, we can stare at these set-ups for hours and hours-provided we can get it all installed correctly with the wiring right and everything properly calibrated and talking to everything else. And this, too, can take hours and hours. And hours.

Not long ago, it was a big deal to have your position confirmed. It was “all you’ll ever need.”

At one show we engaged about a dozen boaters (sail and power) in conversation about their navigation skills and equipment. What we learned was interesting: All but one sailor relied exclusively on GPS for navigation. Despite that fact, most said they didn’t carry a spare GPS receiver. All said they knew how to use a compass, but none used it any more. None had checked his steering compass for accuracy in recent years. One didn’t even have one onboard, having retired it to his “garage box” the previous year.

All of the boaters we interviewed said they had limited or no experience dead-reckoning. “I’ve got GPS and a plotter. What do I need charts for?” the owner of a Hunter asked. A few weren’t quite sure what the term “dead-reckoning” meant.

If her GPS quit, one woman, who owned a 40-foot Catalina with her husband, confessed that she’d probably be dead in the water.

AutoPulling
Electric winches used to be reserved for folks too rich, weak, or lazy to grind. There’s no doubt that if you’re sailing shorthanded, or getting older, or have a shoulder injury, these are handy to have. We’re not criticizing electric winches wholesale-but we would venture to say that people who are sold electric winches as a matter of course should first have a sense of what it feels like to grind in a headsail by hand. They should know what the pressure feels like. They should feel the connection between headsail and sheet and winch mechanism and arm and back. If you need the electricity at that point, buy it. (Don’t bother to write us an angry letter if you have electric winches-we’re sure you have a good reason.)

Of course there are no rules. Of course it’s a matter of choice, and what floats one’s boat. But there’s so much wrong stuff being shoved at people. Maybe, as one Supreme Court justice wrote about pornography, we know it when we see it. Take the example of the electric winch’s sister on the bow-the electric windlass, an invention that has put an end to bruising, bleeding and strained back muscles for thousands of sailors. But here’s a windlass with the lifting power of over a ton. It draws 110 amps, and costs $3,800. The owner of a boat that uses a 24-lb Danforth is considering buying it as an “anti-grounding device,” and the salesman isn’t trying to talk him out of it. OK, some people just can’t get enough firepower, and maybe this guy has an alternator as big as the Ritz. But the main selling point is the optional remote control (retail price $380). “So you can weigh anchor with the press of a button while you’re doing your business in the head?” asks the customer. “Yep,” smiles the salesman.

(No need to write us an angry letter if you have a remote control for your windlass. We’re sure it makes all the sense in the world.)

AutoInterTainment
There are plenty of things you can carry out on the water today that used to be permanently fastened to the shore: telephones, TV with pay-per-view movies, and all the wonders of the Internet. There are plenty of products that can track all sorts of satellites in rough seas or at anchor (retail prices start at $3,000), and there are systems that can cast your boat’s position up to a satellite-not an EPIRB signal, mind you, but a signal that goes to a security company that then make your boat’s position available to you via the Internet, in case you misplace it. The system is about $4,000.

What’s the real price of all this stuff? How about literacy? How about conversation? Dedicated cruisers once devoured books. Trading libraries graced almost every port. Sailors tended to be not only the handiest people in the world, but also the most interesting. After all, when we weren’t eating, drinking, playing board games, making repairs, or gamming with other sailors, we were reading.

If not literacy, is this price paid in privacy? Not long ago, excursions on our boats, whether for weekends or for weeks, immersed us in another world. Once the lines were cast off, we were left alone in a different, fascinating universe with our loved-ones and whatever amusements we brought along for the trip. Of course that’s still possible, but there’s a lot of subtle and not-so-subtle coersion to bring the trappings (and we mean trappings) of land along: wireless offices (so as not to miss the e-mail); television (so as not to miss the news or the Yankees game); video games to occupy the kids, and everyone with their own headset so they can be alone together.

Will this eventually be farewell to good conversation, sea stories, fish stories, jokes, and games around the saloon table? Do the trappings presage the end of a way of life defined for so long by independence, teamwork, and, yes, occasional risk, occasional discomfort-and, for lack of a better phrase, peace and quiet? Among crews that have known the good life, there’s less of a threat. But many others just coming into the game are being handed “must have” manifests that are ludicrous.

We’ve spent more than our share of days down below doing things like trying to get fluxgate compasses to talk to instruments so that we could have a digital read-out of what we could have seen well enough, if not down to a half-degree, with our own eyes-if we’d been on deck.